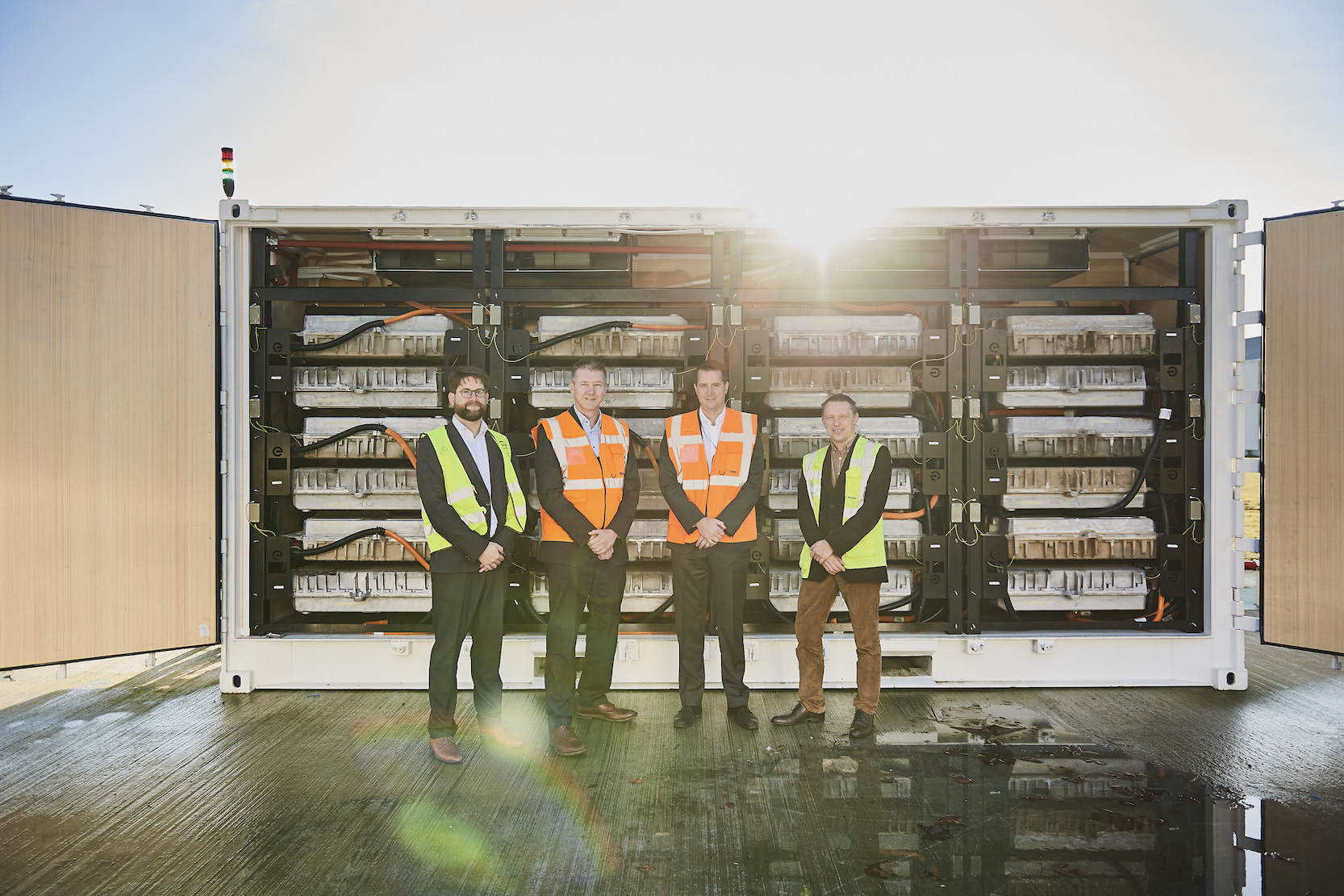 The project was officially inaugurated at the end of last month. Image: Connected Energy.

An energy storage system made up of ‘second life’ batteries previously used in Renault’s electric vehicle (EV) has been deployed for Umicore, a multinational materials technology company headquartered in Belgium.

Taken from Renault’s Kangoo utility EVs, the batteries will provide firm frequency response to the grid, acting as a revenue generator for Umicore’s industrial site.

Maintaining stability of the network at its operating frequency of 50Hz is vital for enabling the addition of more distributed energy resources, as the world’s grids move away from centralised generation, also meaning that renewables – described as intermittent, or more accurately as variable energy resources – can be more readily accommodated. The system delivered for Umicore also helps the materials company maintain power quality for running its own operations.

Technology provider Connected Energy said that using EV battery packs as stationary energy storage systems (ESS) in this way can extend their lifetime by as much as seven years. The UK-headquartered company, based in England’s northeast automotive sector powerhouse, celebrated the inauguration of the Umicore project as its biggest to date at 1.2MW of output and 720kWh capacity.

‘Doubling the value of the battery asset’

“The batteries that are supplied to us have met our technical criteria and specification, and effectively certified before we reuse them in our stationary storage applications.”

Connected Energy “stays at the battery pack level,” Bailey said, seeing a keen opportunity to tap what remains in batteries that are, he says, built to the highest technical specifications and standards, given that they have to have met the stringent criteria of being safe and reliable for use in manned vehicles in their “first life”.

Renault is one of a number of OEMs and carmaker groups that Connected Energy is working with, while remaining open to other battery and tech partnerships, Bailey told Energy-Storage.news in an interview.

“I think when we’re considering these days now that we’re talking a lot about sustainability and the circular economy, that obviously there is a lot of value of resources that are in the battery when it’s in the car,” Bailey said.

“What we’re doing is basically doubling the value of that asset and the [material] resources already employed in that battery for stationary storage applications.”

As much as sustainability remains a challenge and an important consideration, both 2nd life reuse or repurposing, and recycling of lithium batteries – including cobalt and other materials – have been described as a massive opportunity.

ENGIE, Umicore seeking circular economy for batteries and their materials

In order to provide the firm frequency response service, dubbed R1 by Belgium’s grid operator, Elia, Connected Energy’s E-Stor branded system is paired with a distributed energy platform run by fellow Brits Kiwi Power, along with an onsite generator and a load bank.

Kiwi Power now operates and optimises the assets and their ‘orchestration’. In addition to the existing relationship between Groupe Renault and Connected Energy that the project leverages, there is also a big energy player backing it: ENGIE is overall project leader.

“ENGIE strongly believes in the technology of battery systems. With the energy transition which is currently taking place, we have to think carefully about how energy can be produced in a different way and how ENGIE can accompany its customers with appropriate solutions and services,” ENGIE Generation Europe CEO Cedric Osterrieth said.

Meanwhile site manager Geert Defiuew at the Umicore Olen facility where the 1.2M system is located said that the batteries both help to stabilise the grid and increase utilisations of Umicore’s “sustainable energy solutions including wind turbines and a combined heat power plant.”

“The system also allows us to further expand our knowledge and expertise in the field of rechargeable batteries in 'second life' applications,” Defieuw said.

Indeed, Umicore, which also has recycling arms of its business divisions, is already working with various other partners on circular economy applications for batteries, including work with BMW on creating a “closed loop” supply chain for lithium batteries. 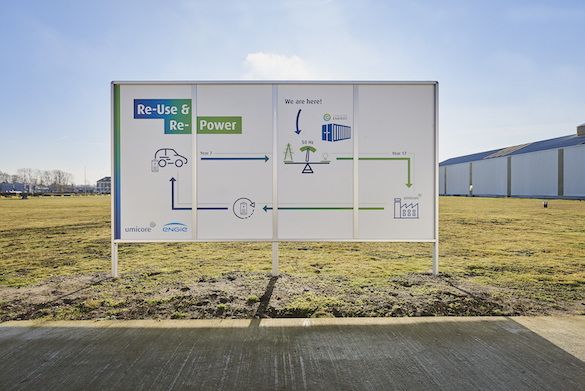 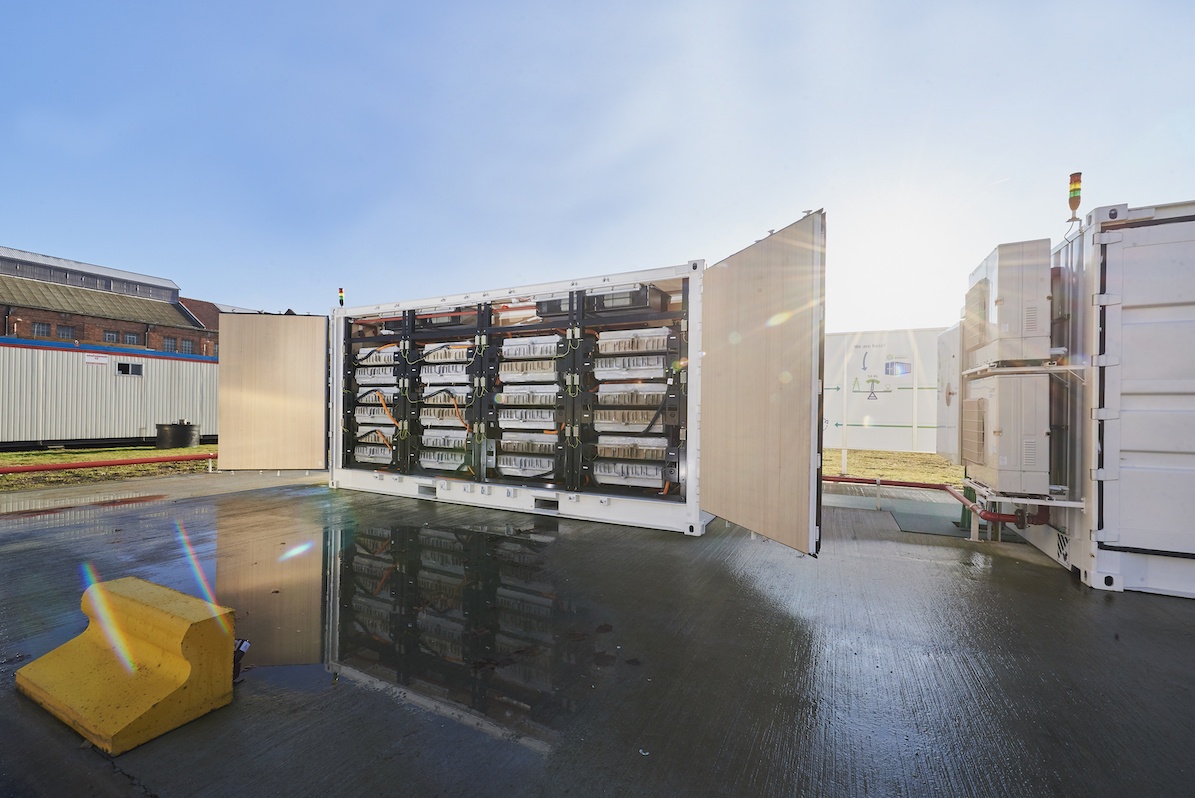