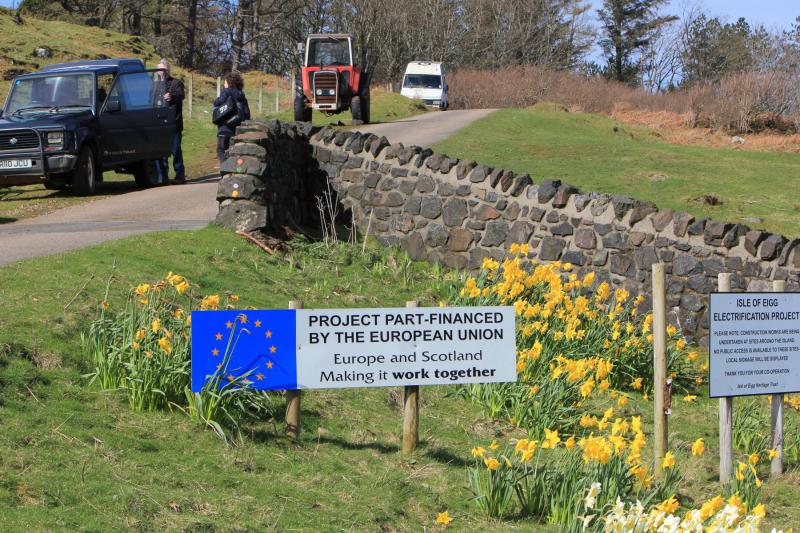 The remote Isle of Eigg, one of the Scottish Hebridean islands, is now host to a hybrid microgrid which incorporates flywheels and ultracapacitors for high power functions as well as solar, batteries, wind and diesel backup.

Situated 10 miles off the west coast of Scotland and just 12 square miles in area, the island has only around 100 permanent inhabitants but is now able to source almost all of its energy from renewables. Previously reliant on diesel generation for power, a mains grid has effectively been formed by the creation of the microgrid, part of a project which has been ongoing through Britain’s Heritage Trust since 2008.

This week, European ultracapactor manufacturer Skeleton Technologies announced that its devices have been installed to perform high power, fast response applications to keep the grid stable, along with mechanical energy storage in the form of flywheels made by Kinetic Traction.

The isle is perhaps fortunate in that a stream inland can provide up to 100kW of hydroelectric power and covers most of the island’s energy demand throughout the year. In addition, it now boasts a 50kW PV array and 24kW of wind generation capacity. The latter is usually enough to cover energy demand during the night, given the islands northerly location. There is also a diesel genset, but is considered a ‘last resort’ backup source of energy. Excess wind generation is fed into a bank of storage heaters.

Lead acid batteries have been chosen to provide up to six hours of storage and dispatch capability. However unlike the more expensive lithium-ion batteries, lead acid devices are not designed to be cycled frequently or to perform high power applications without individual cells or systems needing augmentation or replacement. In an interview in March with this site, Skeleton Technologies CEO Taavi Madiberk explained how ultracapacitors could perform this battery-preserving role, as well as laying out his arguments for why bankability is key for the grid application of capacitors to become a more common feature of distributed energy systems.

To this end, the flywheels and ultracapacitors ‘kick in’ to preserve the charge in the batteries and prevent them from having to perform those taxing fast charge-discharge cycles. Lead acid batteries also suffer from a ‘whiplash’ effect when asked to discharge large amounts of power quickly, resulting in voltage drops. This can cause the batteries to be unable to respond for short periods of time, causing various client systems to shutdown.

“The ultracaps provide ultrafast response to keep the current as smooth as possible in terms of frequency and voltage. After about one second the flywheel takes over and then it is the lead-acid battery array that supplies current to the grid,” Skeleton Technologies spokesman Olivier Chabilan told Energy-Storage.news today.

The small island’s population has grown and seasonal demand from tourists mean that the addition of mains power will have a long-term impact on the environment and economics of the Isle. Skeleton Technologies’ Olivier Chabilan said that while he was not able to disclose financial or economic aspects of the microgrid, he has blogged for the company’s own website discussing the dynamics of the island community’s decision to free itself from expensive and polluting diesel fuel.

A feature article, ‘Taking smart to the edges of the world’ published in a recent issue of PV Tech Power (also from our publisher Solar Media) looked at the phenomenon of creating smart, renewable microgrids for island territories and focussed on three leading case studies. Long identified by the likes of the International Renewable Energy Agency as an environmental and economic win-win, batteries and other distributed energy storage resources are quickly helping to enable ever-higher amounts of renewable energy penetration and in many cases are bringing reliable power to communities for the first time.