It has always been anticipated that by the early 2020s, the feed-in tariff would have tapered away in Japan’s booming solar market. Andy Colthorpe speaks with analyst Izumi Kaizuka at RTS Corporation to learn more about what the future holds for post-subsidy solar in Japan. This article first appeared in Volume 22 of the journal PV Tech Power.

A land of high energy consumption, reliant on imported fossil fuels, Japan is also globally known as a country where everything from traditional crafts to high-tech industries are always striving to improve and innovate. As the energy market moves towards deregulation and wider competition, the solar PV sector within that bigger picture moves away from the feed-in tariff (FiT) subsidy-driven phase.

Just announced as this edition of PV Tech Power went to press (mid-February 2020), were FiTs for the 2020 Japanese financial year, which begins in April. While small-scale solar of under 10kW capacity continues to receive a fairly generous ¥22 (US$0.20) per kWh, anything between 10kW and 50kW gets ¥13 and 50kW to 250kW gets ¥12; anything larger than that has to compete in auctions.

“The big difference [to previous years] is that anything over 250kW has to enter into a competitive bidding process. It was the case that [only] 500kW capacity projects and over were eligible for auctions but it is now at the 250kW+ threshold,” says Izumi Kaizuka, manager at Tokyo-headquartered analysis firm RTS Corporation.

“The price was low, but also having spoken to many in the industry, developers are really busy with contracts for projects that are not yet in operation but have been awarded the FiT in previous years; they are working very hard to get these built, rather than being able to focus on new projects,” Kaizuka says.

“Anything awarded up to 2014 needs to be built this year or show evidence of construction by this March, so they are extremely busy and are finding it difficult to even think about new projects.”

Indeed, the first few years of the FiT saw dozens of gigawatts of awarded projects apparently stall, for various and widely reported reasons. So, as our show preview for the upcoming PV Expo in Tokyo demon- strates (see p.100), activity in the ground- mounted sector focuses to a greater extent on these already-awarded but nowhere- near shovel-ready projects.

Taken from a different perspective however, the ¥22 per kWh for sub-10kW projects remains fairly generous. Kaizuka says it is also indicative of both a natural market shift and government policy shifting solar away from the fields – and hills and mountains – of Japan and towards domestic, commercial and industrial rooftops. These still-to-come rooftop sites will join Japan’s existing high installed base of ground-mount capacity (installations have ranged from over 6GW to 9GW in years since 2013 with around 10.5GW deployed in 2015, the ‘peak’ year of the FiT).

RTS Corporation has modelled various scenarios and found that Japan could potentially find itself host to 150GW of PV generation by 2030. Indeed, the government’s three-year Basic Energy Plan aims for renewables to reach 22-24% of the national energy mix by that year. That would peg solar’s share at around 64GW. But, as Kaizuka says, nuclear energy isn’t generating anymore in Japan since the Fukushima Daiichi reactor was damaged by the 2011 earthquake and tsunami.

“A small nuclear power plant has restarted operation, but we can’t expect more [restarts]. We thought solar can cover that gap, we studied the energy consumption of households and the commercial sector – and other sectors – and calculated how much electricity solar can replace and add; in total, our analysis that we can install 150GW by 2030 (see Figure 1). Of course, we have many restrictions including grid issues, but we believe that there will be major market shifts from the ground-mounted solar to buildings.” 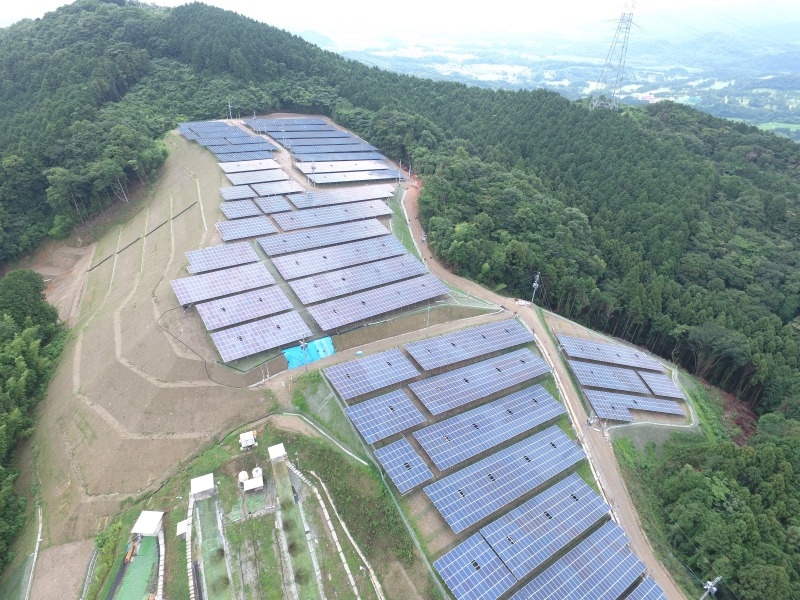 While the first few years of the FiT were marked by an abundance of ‘megasolar’ projects, the emphasis continues to shift to more distributed PV projects. Image: 3R.

Kaizuka points out that as a mountainous country with densely packed urban areas dotted around it, Japan’s three major regional power companies, Kansai Electric, Chubu Electric and Tokyo Electric make up approximately 65% to 70% of the country’s electricity consumption alone.

“In those city areas it’s impossible to have ground-mounted stations but we have many, many roofs! That’s the reason that we are proposing that Japan can have 150GW by 2030 and appealing to the governmental sectors and industries how to achieve this. Even the fairly conservative International Energy Agency’s World Energy Outlook report finds that Japan could achieve 108GW of solar capacity by 2030,” Kaizuka says.

“We have to realise decarbonisation and unfortunately in Japan, for developing wind power, space is limited, while the north has very good locations but sometimes it’s difficult because of the lack of transmission lines. In the case of solar, it can be everywhere.” 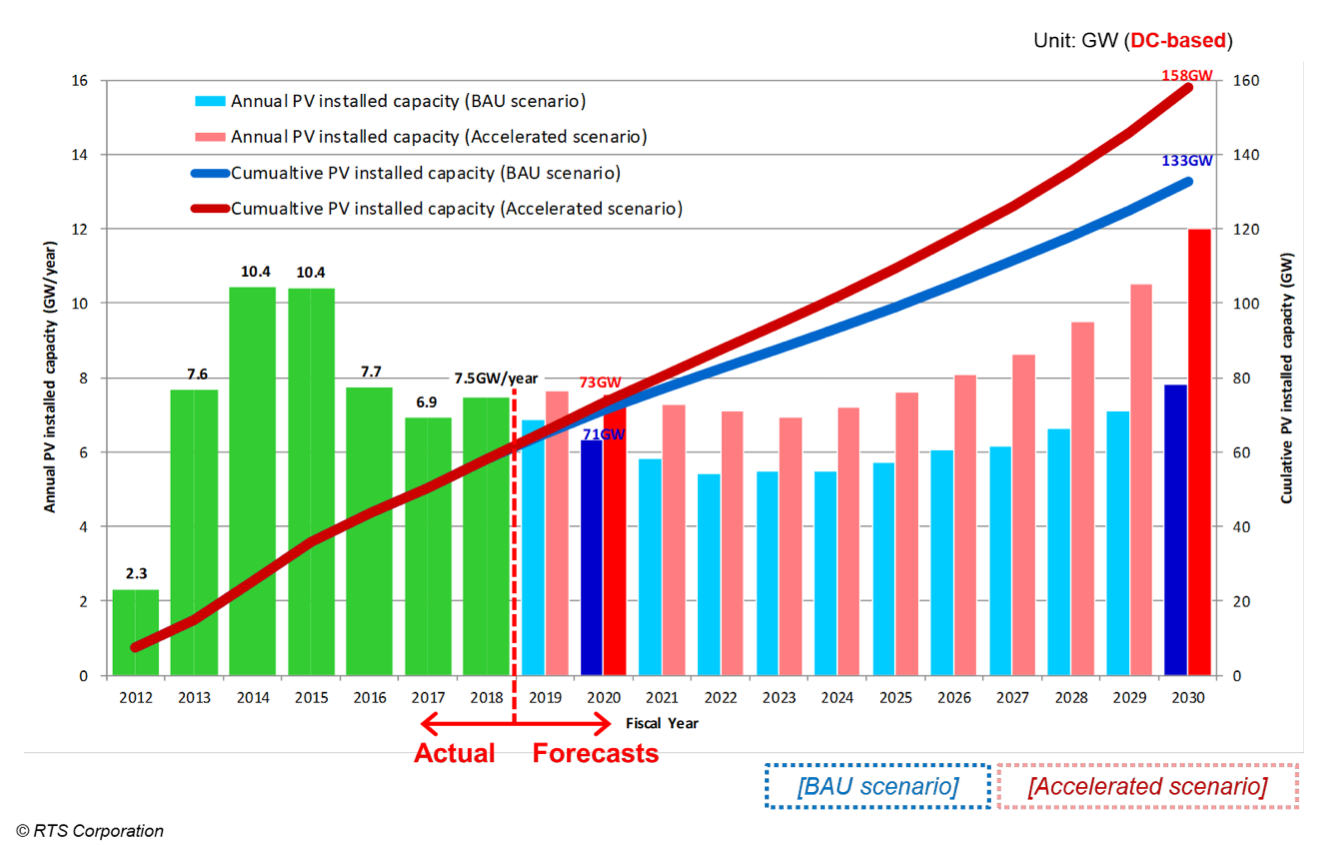 There are some other big market dynamics worth considering in this context: 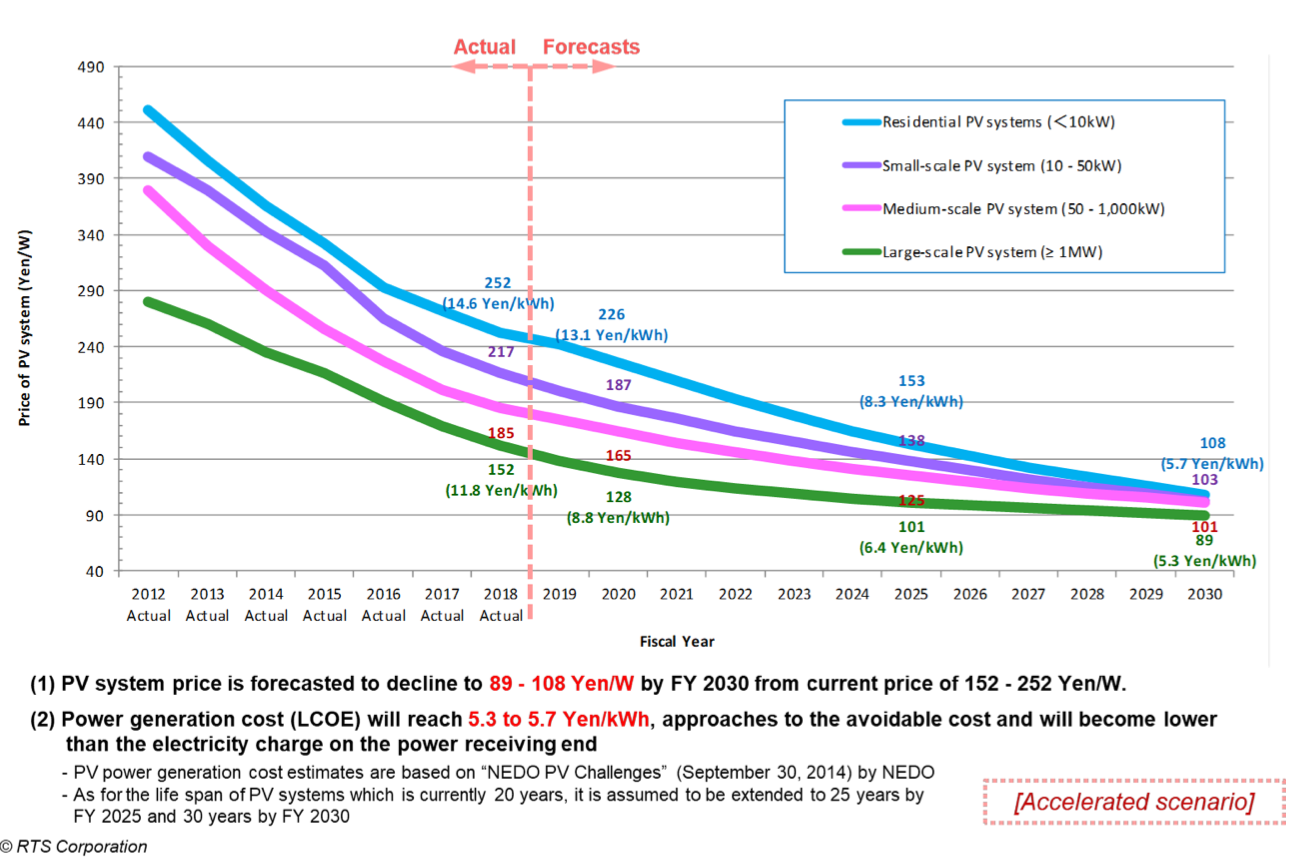 Looking ahead, Kaizuka says that new products and business models are emerging in Japan, bit by bit. Some are offering battery storage and solar together, while the use of batteries for ancillary services and flexibility has not even really begun in Japan – yet.

There are also virtual power plant (VPP) demonstration projects underway, while the newly deregulated electricity retail market is finding tie-ins between different market stakeholders (Canadian Solar is partnered on sales with Nissan for its Leaf EV, for example) creating new business models to drive deployment of solar, batteries and other clean and futuristic energy technologies. Large-scale solar is still on its learning curve to hit lower soft costs too (see Figure 2).

“The market is changing right now, from all-FiT driven to the emergence, bit by bit, of self-consumption business models,” Kaizuka says.

“The FiT itself will exist this year; but from 2021 onwards, the government is trying to create something called a feed-in premium. [This will be based around the] JPEX, an energy trading market, plus receiving a premium. Discussions around this are currently taking place. [This is likely to be] along the lines of what is happening in Germany but it’s not clear yet which direction this will go in.”

This article first appeared in Volume 22 of the journal PV Tech Power, available now as a free download from the PV Tech Store.