Panasonic, Toyota to work together on automotive batteries ‘of the future’ 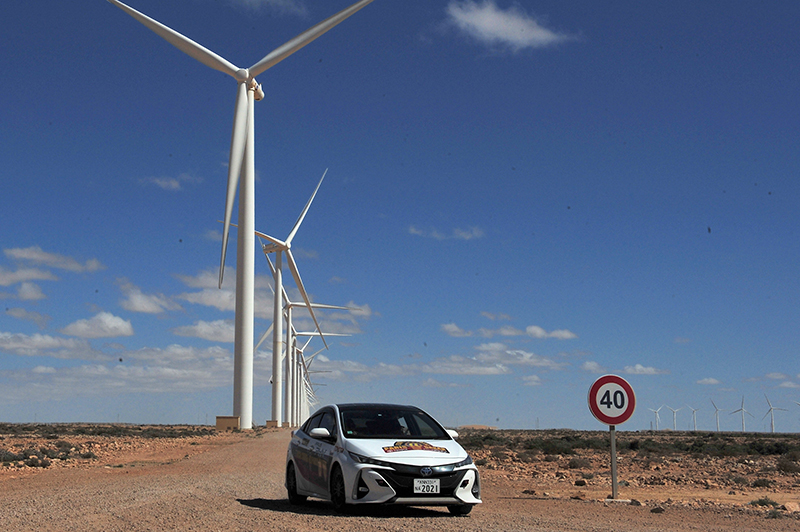 Toyota Prius Hybrid vehicle photographed at Tarfaya Wind Farm, Morocco, as a team from the company retraced the route of the Paris-Dakar Rally in March last year. Image: Toyota.

Automotive giant Toyota and electronics firm Panasonic have announced a joint venture which will look to lead the field in EV battery technology.

Initially rumoured over the weekend, the two Japanese companies confirmed this week their intent to form a joint venture (JV) under a business-integration contract.

The JV, to be established by the end of next year pending regulatory approvals, will be 51% owned by Toyota and 49% by Panasonic.

The scope of the JV is to cover R&D, production engineering, manufacturing, procurement and a host of other business activities related to lithium-ion, solid-state and next generation batteries, outlining the duo’s commitment to leading the field in battery technology.

The JV is expected to house up to 3,500 employees, with Toyota committed to transferring equipment and personnel in battery cell-related fields while Panasonic will transfer equipment, personnel and other assets related to the automotive prismatic battery business.

And while Toyota will hold a majority stake in the JV, Panasonic will be free to sell batteries to other automakers in principle.

The duo said that the automotive sector faced growing calls to find solutions to issues including global warming and energy, with battery solutions quickly becoming the most important element in the electrification of vehicles.

But while this is the case, numerous challenges require solving. Energy density, charging time and safety were listed alongside stable supply chains and effective recycling structures.

Toyota and Panasonic said that independent efforts from battery and automotive manufacturers alone are not enough to solve those issues, prompting a more conclusive agreement between the two.

Toyota and Panasonic have been collaborating on prismatic batteries for use in electric vehicles since December 2017. The two companies penned an agreement to study the feasibility of a battery business, under which they have claimed to have “lead the field” in both performance and cost.

The announcement of a JV is designed to “further strengthen and accelerate” the collaboration, bringing more competitive batteries to market.

The JV will however also see further collaboration from the two companies in the fields of vehicle planning and conception.

Panasonic senior managing executive officer Masahisa Shibata said: “Through the electrification of vehicles, we want to accelerate our contribution to the realisation of a society of mobility that is kind to the environment.”

While Panasonic is active in solar PV and energy storage equipment production, including its partnership with Tesla-SolarCity, company representatives confirmed that the latest Toyota JV is outside the Panasonic Eco Solutions business division which is responsible for work in those areas.