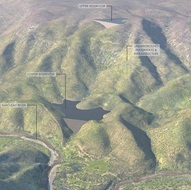 The 600MW / 7200MWh, billion-dollar energy storage project in the east coast state of Australia will kick-start the country’s largest Renewable Energy Zone, and unlock 600 regional jobs according to the local government.

“The Australian Energy Market Operator says that NSW needs more than twice the energy storage of Snowy 2.0 again by the mid-2030s and projects like Oven Mountain can help us reach that goal,” explained Energy Minister Matt Kean.

“It can take about 8 years to deliver massive pumped hydro projects and we need to get going now to create jobs and improve the reliability of the energy grid.”

Water will be pumped up Oven Mountain when energy is cheap, and then when there is little wind and solar generation, it will be released, turning turbines as it flows down the hill to generate up to 600MW of power.

The area has some of the best pumped hydro resources in the world according to Member for Northern Tablelands Adam Marshall, and particularly as the country tackles the impact of the COVID-19 pandemic, it should seize the opportunity to create jobs through the construction of the site.

“We’re already home to the two largest windfarms in NSW and the largest solar farm in Australia is about to start construction, so this project is the cherry on top of us!”

Assessment requirements for the preparation of an Environmental Impact Statement will now need to be requested by the proponent. These can then go on exhibition for community feedback, and a detailed assessment by the Department of Planning, Industry and Environment can be undertaken before a final decision about the Oven Mountain project is made.