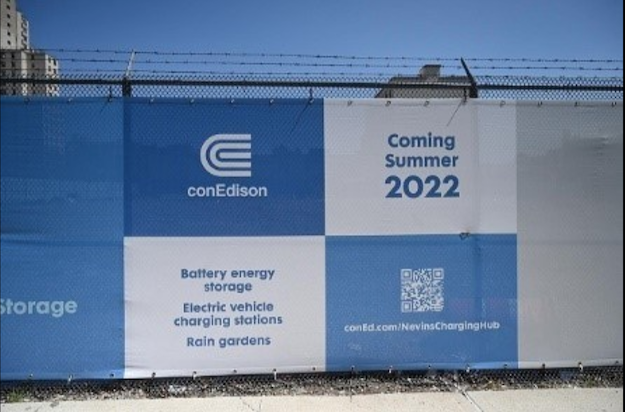 In what seems likely to be the first of many such projects for New York City, an electric vehicle (EV) charging hub is going to be equipped with a 5MW / 15MWh battery energy storage system.

Utility company Con Edison said yesterday that it has awarded a contract for the project to Centrica Business Solutions, the energy solutions subsidiary of UK-headquartered energy holding company Centrica. Sited at a parking lot in Brooklyn, the hub will host 18 fast-DC EV chargers for public use, each capable of providing up to 350kW of power.

Centrica Business Solutions will design, build, own and operate the battery storage system and the car chargers, making land lease payments to Con Edison, which owns the parking lot land. The utility had originally planned to build an extra electrical substation there, before deciding that forecasted energy demand for the Gowanus neighbourhood of Brooklyn where it is located does not necessitate the extra grid infrastructure build-out.

“This project is unique in that it pairs an energy storage system with electric vehicle chargers, two technologies that will each play a big role in our clean energy future. Our hub will help make service to our customers in the area more reliable, provide drivers with an easily accessible place to charge, and spruce up a vacant lot,” Con Edison chief executive Tim Cawley said.

It’s a demonstration project for Con Edison on how best to deploy fast-charging infrastructure for EVs, to support the expected growing demand and the utility will be sharing updates and data on how it goes. Centrica won out in a Con Edison request for proposals (RFP) and is scheduled to have the battery storage and chargers installed by summer 2022.

The storage system, which will be housed in trailers and is expected to be used at the site until at least 2035, will be connected to the Con Edison electric grid by the utility and charged up overnight and other off-peak times when power is at its cheapest and most plentiful. Centrica will optimise its commercial potential by putting energy stored into wholesale markets, aggregated with other resources the company has in a distributed virtual power plant (VPP).

New York state is investing over US$1 billion into zero emissions transport over the next five years, making it a key part of its emissions reduction policy, which includes reaching 50% carbon-free electricity by 2030 and targeting 3GW of energy storage deployments by that year. Governor Andrew Cuomo was among signatories of a letter to President Joe Biden in April, which requested that fossil fuel powered vehicle sales be phased out by 2035.

Meanwhile the use of energy storage system (ESS) technology as a buffer between the grid and spikes in demand for power for EV charging is growing, with projects announced around the world of varying size including in the US. Analysis and research group Guidehouse Insights predicted in a report last summer that global installed capacity of stationary ESS to support vehicles could reach 1,900MW by the end of 2029.

Guidehouse analysts said that ESS is being considered particularly for sites where several 50kW+ rapid chargers are being planned. Stationary batteries represent a much more easily deployed and cost-competitive alternative to grid infrastructure upgrades.