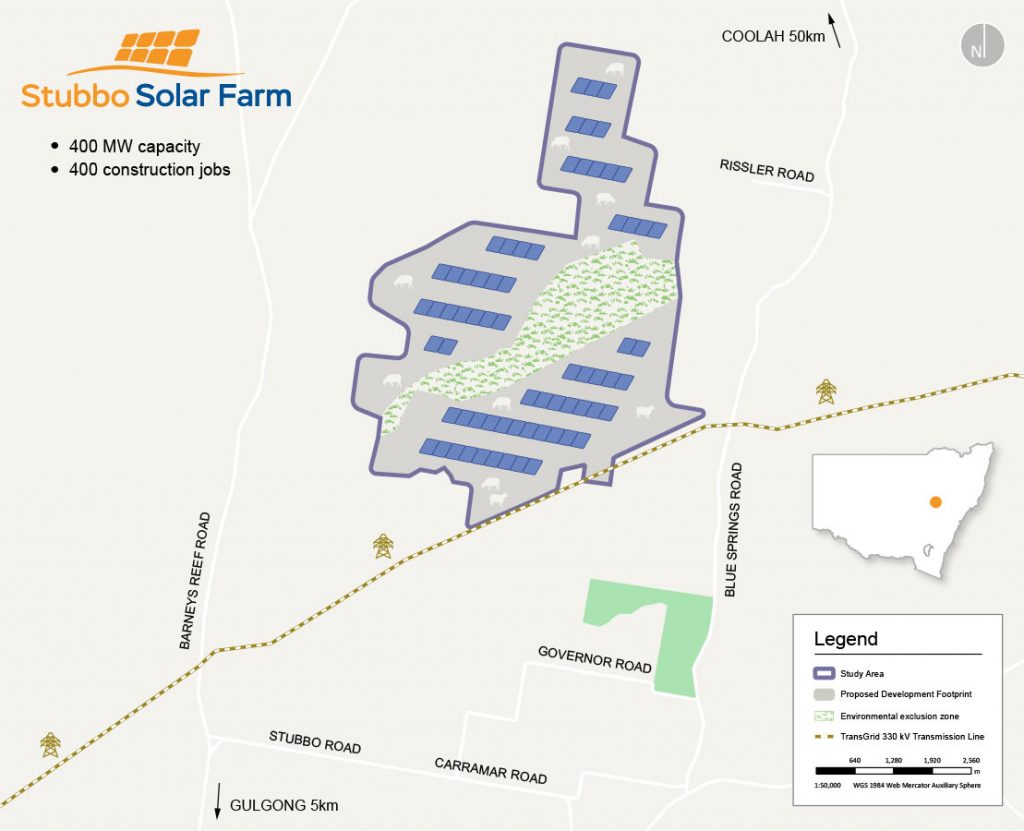 Stubbo Solar Farm and Battery, a project under development in New South Wales (NSW), Australia, which would pair 400MW of solar with 200MW / 200MWh of battery energy storage, has taken a step closer to going ahead.

The NSW Department of Planning, Industry and Assessment has concluded after some deliberation that Stubbo Solar Farm and Battery would contribute positively to several aspects of public benefit, developer UPC/AC Renewables Australia posted earlier this week, on a website created for the project.

It will be sited within NSW’s Central-West Orana Renewable Energy Zone (REZ), one of a number of government-led REZ projects in various states of Australia under development. Australia’s largest planned such zone could be in NSW too and will deliver as much as 8GW of capacity, our sister site PV Tech reported in June. The Central-West Orana REZ meanwhile will house more than 3,000MW of new renewable generation about 10 km north of the town of Gulgong.

The government department’s decision to approve the project was in view of the fact that it would add to the economic diversity of the local region and create jobs in the area, as well as of course contributing to the growth and integration of renewable energy’s share of the local electricity network. UPC/AC said the approval followed a year and a half of “detailed planning”. In addition to creating around 400 jobs during the peak of its construction, project partners said they would further benefit the local area through supporting the region's Mid-West Local Council with “significant funding” for infrastructure upgrades and other initiatives.

UPC/AC Renewables Australia head of solar development Kilian Wentrup said that the company hopes to begin construction “by early to mid-2022”, subject to contracts being finalised and the project achieving financial close. The next steps now will be the appointment of an engineering, procurement and construction (EPC) partner and application for grid connection.

Also in New South Wales, UPC/AC began construction on New England Solar Farm, described as Australia's “largest hybrid solar and battery storage facility” in March this year, but while that project will have 720MW of solar PV capacity, the planned battery storage facility will only be 50MW / 50MWh, although it could later be expanded to as much as 400MWh.

Also of note in the state was a recent deal signed in May by Shell for operational rights to a 60MW / 120MWh portion of a new 100MW / 200MWh battery storage system under development in south-west NSW, while at a much earlier stage of development is a proposed battery project with up to 1,200MW output in the Hunter Valley region about 150km north of Sydney, within the Hunter Economic Zone, an industrial redevelopment scheme. That project is under development by CEP. Energy, a specialist renewable energy fund company in Australia.