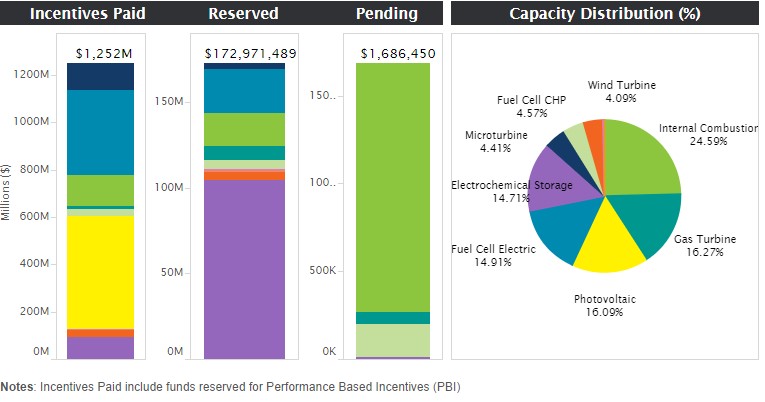 Some of Navigant’s statistics on the first steps of SGIP in 2017. Image: Navigant Research.

An analyst at Navigant Research has said he was surprised to see Tesla dominate California’s SGIP (Self-Generation Incentive Program) applications, with the Silicon Valley car and tech company accounting for half of all requested funds.

The SGIP scheme reopened at the beginning of May, favouring energy storage with over 75% of the total US$567 million budget over two years allocated to support the technology. While previous rounds of SGIP since 2001 had awarded 90% of its funds to generators, from a total of US$1.25 billion paid out to date.

Navigant Research analyst Adam Forni said the scheme should drive forward growth of the industry from a manufacturing perspective, as well as helping foster deployment and in turn hopefully aid decarbonisation.

“The idea is that storage, many would agree, is going to become a much more mass industry and I think in addition to the decarbonising aspects of this programme there’s a feeling that this money is well invested,” Forni said.

“There’s a feeling among the powers that be that it’s well invested towards the development of that industry.”

Energy storage proved as popular with applicants as it did to programme designers, with 1,198 of 1,237 total applications received on the first day alone. This marks a significant contrast to the early days of SGIP, when it was heavily weighted towards encouraging fuel cells. However, Forni says, due to fuel cell generators creating some greenhouse gas emissions (GHGs), there has been a move away from supporting the technology at state level. In the past, over half of the total paid out through SGIP since 2001 has been to fuel cells, over half a billion dollars. Similarly, only 9 out of those 1,237 initial applications were for generators.

“In addition, there is a drive towards developing the storage industry in California, both to support the California market as well as to potentially export batteries, controls and software and so I think that was another part of it,” Forni said.

As well as whole system manufacturers such as Tesla, many of the storage industry players supported through SGIP are California-based tech-driven companies like Stem, Green Charge and AMS (Advanced Microgrid Solutions) which, as Forni said, deliver “digital goods for the most part”, sourcing hardware from other suppliers and emphasising the energy management and software sides of their offerings.

The SGIP programme has also been reconfigured for fairness, operating a lottery system when any step of the incentive is fully subscribed.

“That’s one key development that’s viewed as being more fair – as opposed to the past when an application step was fully subscribed quickly and certain parties took large fractions of it,” Forni explained.

Developers and system host customers apply for SGIP, selecting their manufacturer of choice to get their funding. While the picture is constantly shifting as successive steps are applied for, the early diagnosis was that Tesla appears to be the biggest winner out of the manufacturers. More than half the early applicant funds selected Tesla equipment, either Powerwalls for residential or Powerpacks for commercial & industrial applications, making up around US$29 million of allocated funds.

“It’s somewhat surprising to see Tesla with such an overwhelming lead in the programme,” Forni’s colleague at Navigant, energy storage analyst Alex Eller, said. “The re-designed rules were supposed to limit the ability for any company to capture the majority of the funding, using a lottery system. However my understanding of the programme rules is that companies can submit as many projects as they have, but the actual funding is given to them in a lottery system. I would assume that Tesla simply has way more projects eligible for funding than any other company.”

Adam Forni offered some possible explanations for this runaway lead, including Tesla’s ability to manufacture at scale and low cost, the company’s fortuitous location in the heart of California and its generally high profile and popularity with eco-conscious consumers and businesses.

Overall, Forni said the SGIP programme has several strengths in its design and aims, a key one being that much of the data from applicants and programme coordinators – which include investor-owned utilities like Pacific Gas & Electric – is readily available and offers transparency as well as the opportunity to dive deep into the programme metrics and clearly judge how effective it proves to be. The Centre for Sustainable Energy, in particular, one of the programme coordinators, publishes weekly updates of the breakdown of each incentive step on its SGIP website portal.