Mission-critical: Challenges in building resilient microgrids for the US Military 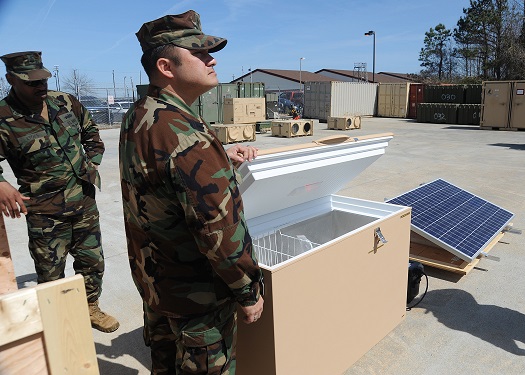 A military base typically has a generator at each critical building. The generator provides back up power to support critical loads when the grid goes out. The DoD also has a redundancy requirement referred to as an “N+1” configuration – installing a backup for the backup, thus ensuring a military facility is fully powered even if primary backup generators fail. Generators are sized to the facility’s peak loads, which means when they are operating during a grid outage, the generator is running at a sub-optimal output and fuel consumption level because the facility is typically at base load.

Military facilities with on-site renewables, particularly solar, benefit from lower-cost energy production and a lower carbon footprint. However, solar inverters go off-line during a grid outage because of the anti-islanding safety requirements of UL1741 and IEEE1547, thus losing their energy resiliency capability for the facilities. And since the sun doesn’t always shine and the wind doesn’t always blow, renewable energy is an intermittent energy resource, and potentially problematic where a firm generation requirement is needed for grid-independent energy security.

Combining a microgrid controller with battery energy storage solves these problems of sub-optimal generator operation and intermittent renewables in military microgrids, and is key to delivering a fourteen day grid-independence capability. First, let’s look at how battery energy storage and a microgrid optimises generators. The microgrid will tie the multiple facilities and their generators into a single electrical system. Using generator control optimisation algorithms, only the needed number of generators are utilised to support all the loads from the multiple facilities, and the generators run at their optimal fuel consumption point (100% load).

Battery energy storage buffers load intermittency – by discharging when loads go up, and charging when loads go down. This allows the generators to stay operating at their most efficient fuel burn, with no stalling issues or part load operation. Batteries can also provide ‘silent running’ operation, meaning all generators are turned off and the batteries (and any renewables) feed the loads. Fuel consumption improvement as high as 70% has been measured with these generator optimisation techniques.  For a military base with a 3MW load, generators burning 196 gallons of diesel fuel per hour and a 72-hour fuel tank, generator optimisation alone adds seven days of energy resiliency, extending the 72 hour fuel reserve into a ten-day resiliency.

Furthermore, batteries can be utilised to ‘extend the sun’ – storing solar energy during the day and releasing it at night. Batteries smooth intermittent renewable energy by discharging during cloud coverage or when the wind slows. An advanced microgrid controller will keep renewable inverters on line during a grid outage, thus ensuring more energy independence for the military facility. For a military base with a 3MW load and 3MW on-site solar, keeping the solar operating during a grid outage would add up to five extra days of energy resiliency.

Optimising generators, buffering loads and intermittent generation, and extending the sun are all stacked benefits of battery energy storage in military microgrids. Already an important component, battery energy storage is now even more vital to helping military bases achieve the extended resiliency standard with the same amount of energy resources.