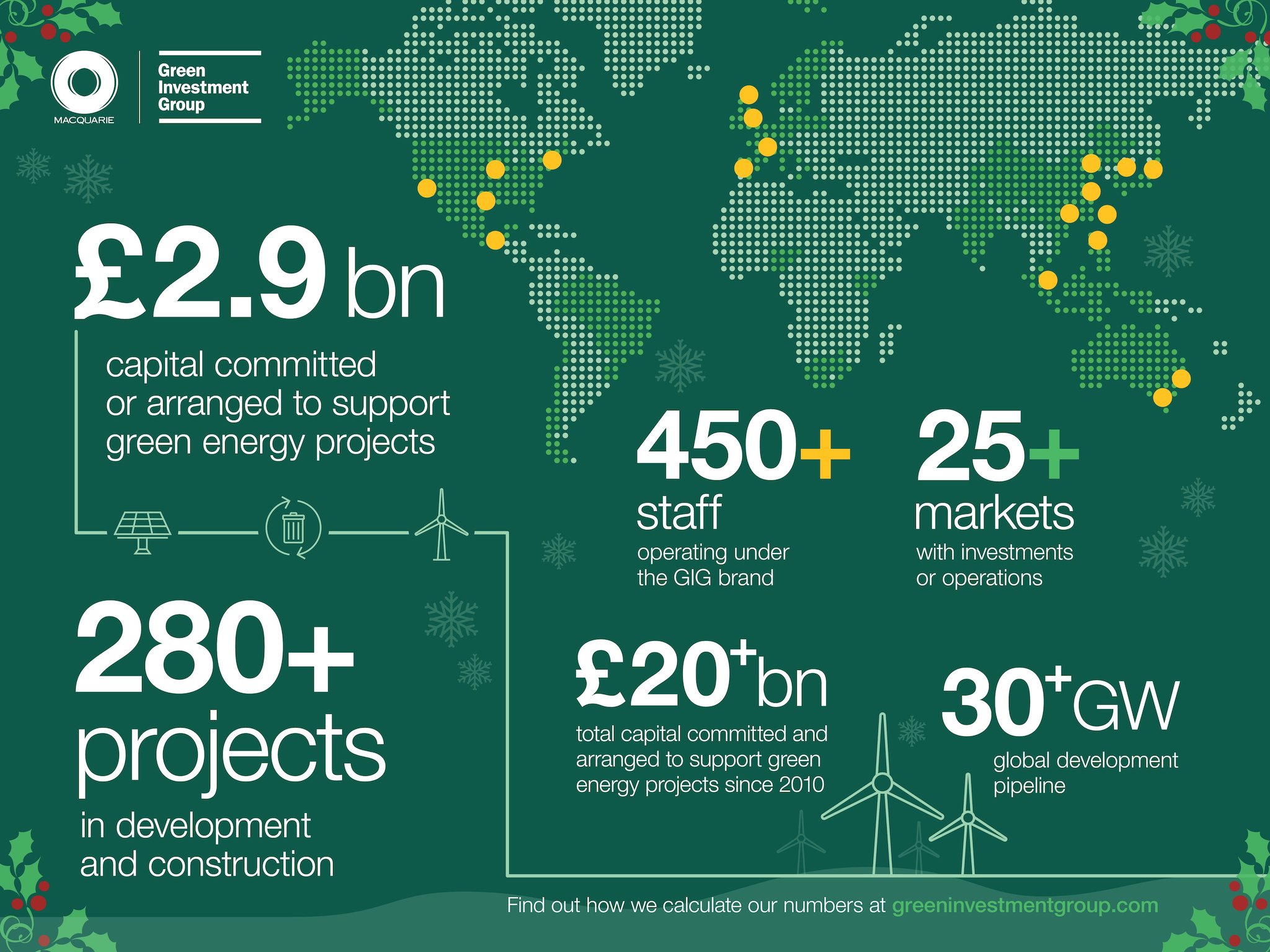 Some of Green Investment Group’s selected year-in-review highlights of 2020. Image: GIG via Twitter.

The Green Investment Group (GIG), a company owned by financial services group Macquarie, is investing an unspecified sum into esVolta, a US-headquartered developer and owner of utility-scale energy storage projects.

esVolta has 600MWh+ of contracted energy storage projects in California, including the 75MW / 300MWh Hummingbird Energy Storage project which is one of several new facilities enabling investor-owned utility Pacific Gas & Electric (PG&E) to retire a 605MW natural gas plant in Coyote Valley, California. Elsewhere in the state – which has aggressive policy goals to reach 100% clean energy by 2045 – the developer was picked by Community Choice Aggregator (CCA) groups to help support their supply of electricity to retail customers with a 15MW / 60MWh standalone battery storage project. In February 2020, esVolta closed a senior secured credit facility worth around US$140 million towards funding its projects.

GIG announced yesterday that it will make an investment in esVolta which will start out as a bridge loan to the developer but will be converted to equity, once requisite regulatory approvals are obtained from parties including the US Federal Energy Regulatory Commission (FERC).

GIG was originally launched as a state-owned enterprise called the Green Investment Bank by the government of the UK in 2012, but was bought by the Macquarie Group in 2017. It is now active in more than 25 markets and employs or works with more than 450 experts including specialist “green” investors and developers.

Its existing interests in the energy storage market include the launch of a joint venture (JV) with renewables developer Enso Energy in mid-2020 to develop a 1GW pipeline of subsidy-free solar and additional battery storage facilities in the UK. GIG also created a JV last year with German engineering company Siemens called Calibrant Energy, to develop distributed energy resources (DERs) including solar and wind in the US.

Other companies in the Macquarie Group such as Macquarie Capital have also had involvement in the energy storage sector – perhaps most notably Macquarie Capital’s US$200 million project financing deal with Advanced Microgrid Solutions (AMS) for projects at commercial and industrial (C&I) and government sites in 2016. While the deal still remains one of the biggest of its kind in the sector to date, AMS has since been acquired by energy storage technology provider Fluence, itself a JV formed by AES Corporation and Siemens.

GIG’s global head of energy technology Greg Callman said that esVolta – which claimed to have a further 2GWh of utility-scale energy storage projects in development in North America – has “significant growth potential across new markets”. A specialist team at the group which identifies emerging technologies, companies and opportunities in the energy transition has worked on the investment in the company.

“Energy storage is critical to enabling increased renewables deployment, and we’re looking forward to leveraging our capabilities with esVolta to accelerate the energy transition across California and beyond.”

Meanwhile, esVolta founder and CEO Randolph Mann said that in addition to demand for energy storage in his company’s home state of California remaining strong, esVolta sees “vast opportunities for geographic expansion as well as additional product and service offerings.”

“Our relationship with GIG will further broaden our expertise and unlock additional growth opportunities,” Mann said.

In August last year, esVolta signed a deal with analytics and software company ION Energy to help manage the battery assets in its California portfolio. ION Energy’s platform, Edison Analytics, monitors the state of health of batteries, allowing the developer to take action as or before issues emerge with degradation of battery cells as well as determining the “useful available capacity of batteries during operation,” according to ION Energy analytics lead Indresh Kumar.