Large-scale battery storage in the UK: Analysing the 16GW of projects in development

The UK is undoubtedly one of the hottest global markets for battery storage today and a considerable pipeline of projects exists. But which projects will likely get built, and when? The in-house analysis and research team at Solar Media Market Research answers these questions and many more. Analyst Mollie McCorkindale from the team, which is part of Energy-Storage.news' publisher Solar Media, explains some of the methodologies to filter out the top 10 projects in development in the UK.

The pipeline of utility-scale and large commercial segments for battery storage in the UK is continually increasing, with a pipeline of over 16GW of projects with the potential for deployment over the next few years.

This article summarises the output from new analysis of the UK pipeline, explaining how to identify the top ten battery storage projects that are most likely to be completed during 2021. All data is taken from our UK Battery Storage Project Database report.

Currently, the total operational capacity for battery storage in the UK is 1.3GW with 130MW having been commissioned already this year. The graphic below shows a flow diagram that summarises the remaining 2021 site prospects, within the total pipeline of 686 sites. 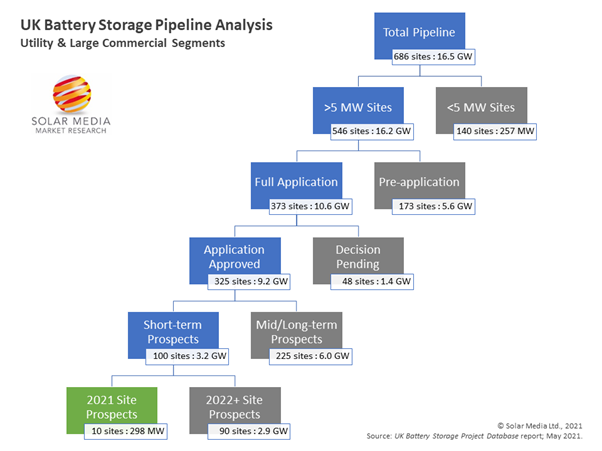 The analysis starts with the total pipeline of 16.5GW across 686 sites and filters out the sites smaller than 5MW. These smaller sites are usually co-located, and the timescale for deployment depends often on co-located site criteria for completion. After these small sites are removed, the pipeline is at 16.2GW across 546 sites.

This segments out now all projects at full application stage: the next step is to remove sites that have not yet had planning approval. The average timeframe for projects – from application being approved to final commissioning – is normally about 18 months, which suggests it is very unlikely for any unapproved applications to be completed this year. Applying this filter takes the pipeline to 9.2GW across 325 sites.

These 325 sites are then split into two segments (short-term prospects and mid/long-term prospects), depending if any progress has been undertaken since planning approval. Projects in the mid/long-term prospects segment generally fall into the ‘no-progress’ category (such as a final developer coming on board, appointing an EPC or battery supplier or announcing the start of construction). 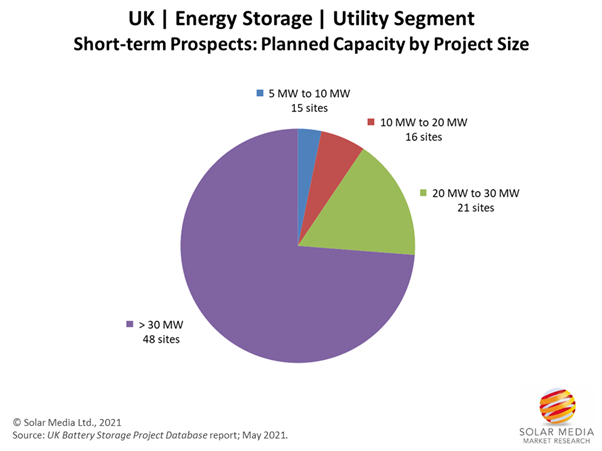 Generally, the size of the site depends on the type of project being constructed; large capacity sites are usually from stand-alone projects, whereas co-located sites vary in size but are usually much smaller. 73% of the planned capacity in the short-term prospects is from large capacity (>30MW) projects, implying most of these are stand-alone.

Finally, the 2021 site prospects can be filtered out, depending on how much progress the projects are showing as of today.

A handful of these sites now have a final developer in place, and an appointed EPC and battery supplier, suggesting completion in the near future. This leaves the pipeline for 2021 site prospects at 298MW across 10 sites. Adding this capacity to the 130MW of operational capacity so far this year means 2021 could exceed 400MW, broadly in line with our forecast of new large-scale storage capacity coming online in the UK.

The graphic below shows the planned capacity by region for these top 10 sites for 2021. 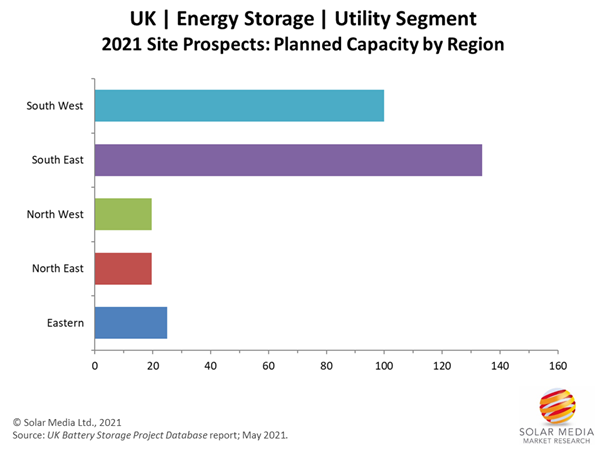 A large portion of the capacity of the top-10 sites in the outstanding 2021 prospects will be located in the south of the UK (South West and South East regions). Image: Solar Media.

So far, battery storage sites have been installed throughout all regions of the UK, with the South East region having the largest operational capacity and an even larger proportion of the total planned capacity; therefore, it is not surprising to see the South East region dominating the capacity in the 2021 site prospects.

Of course, it is not guaranteed that all ten sites will be completed by the end of this year, as some may slip, or deployment may be slowed due to construction delays. If so, these sites will likely carry over and be completed during the first half of 2022.

Taking a more in-depth look at these top ten sites:

All of these projects are gathered together, updated daily and released every month in the UK Battery Storage Project Database report. If you would like to learn more about accessing this information, please contact us via the report landing page here.