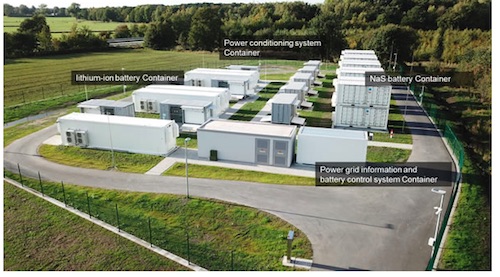 A ceremony was held yesterday in Niedersachsen, Germany, to welcome the start of operations at a ‘hybrid’ energy storage plant that will use a combination of sodium-sulfur and lithium-ion batteries to stabilise the grid.

Through Niedersachsen’s Ministry for Economics, Labour and Transport and authorities in the City of Varel where the demonstration project is located, NEDO teamed up with EWE-Verband, the region’s energy provider. It got underway after city authorities signed off permission to “establish a large-scale power storage system” in April 2017 to run for a three-year demonstration period to February 2020.

As Germany targets 80% of its domestic power supply to come from renewable sources by 2050 with conventional power plants being replaced by wind and solar, the stabilising role that thermal power generators can play is now being addressed by combining the NGK batteries – storing energy for long durations and output at 4MW for five hours without incurring higher costs or shortened battery lifetime through degradation – and lithium-ion, which are high power with rapid charge and discharge.

Varel and the wider Niedersachsen region is experiencing an increase in wind power on the grid, which the energy storage system will help balance through four primary functions, while also being used to try and establish business models for energy trading. The system will provide primary and secondary reserve power to the grid, which are two steps of frequency regulation or frequency control that maintain stability through balancing supply and demand.

Primary reserve is activated within 30 seconds of receiving a grid signal from power distributors, secondary control reserve within five minutes. It will also provide balancing within the local grid network, ensuring actual supply and demand to the grid matches forecasted and planned supply and demand. Finally the system will manage reactive power supply to stabilise local voltage.

From there, it is hoped it can be used to aggregate several distributed energy resources into virtual power plant (VPP) networks, while continuing to support the aims of ‘enera project’, EWE’s energy transition programme which seeks innovative business models that can drive reductions in network expansion costs while managing the decline in fossil fuel use.

The ceremony yesterday was attended by Japan’s ambassador to Germany, Takeshi Yagi, and Germany’s Parliamentary State Secretary to the Federal Minister for Transport and Digital Infrastructure, Enak Ferleman.