The 10MW energy storage array will be installed at Panasonic&rsquo;s Technopark manufacturing facility at Jhajjar, in the state of Haryana. The system will utilise AES Energy Storage&rsquo;s Advancion 4 platform, which has scalable racks for holding lithium-ion batteries and can be used for both utility-scale and behind-the-meter applications. Meanwhile Panasonic will be providing its Advancion-certified batteries.

Panasonic has secured market lead in supplying batteries to the Indian telecoms sector since entering the sector in 2013. Meanwhile AES has 278MW of energy storage projects in construction or late stage development in multiple countries worldwide. AES recently announced aggressive worldwide expansion plans as it looks to move into more markets in Europe, Asia and Africa.

Manish Kumar, managing director, energy storage, AES Corporation spoke to Energy-Storage.News to explain how the Indian battery-based project will progress and how AES views the potential of the Indian market.

How does AES expect to progress in India?

Manish Kumar: This is our first foray not only into India, but also into a large-scale, behind-the-meter project that is going to not only provide daily back-up services, but also grid reliability, grid ancillary services and will demonstrate renewable integration in the region.

Once we have proven the behind-the-meter application, we feel we can leverage this and apply it to the burgeoning market throughout the country. Through the flexibility of the plant, given by the battery energy storage system, we will also demonstrate multiple or stacked value streams to stakeholders.

Consultancy firm Bridge to India has said it expects curtailment of solar power in various Indian states in years to come. Will this improve the argument for battery storage in India?

For example, we have saved customers on the PJM Interconnection grid in the eastern US, around US$20 million annually. We have also reduced costs by almost US$37 million in Chile in just one year.

These possibilities do exist in the very rapid growing power market in India and battery energy storage has a tremendous opportunity right now to be able to improve the grid. It can also facilitate the adoption of new cleaner and cheaper sources of renewable energy for which India has an ambitious goal of adding 100GW of solar and about 60GW of wind in the next five years.

Finally we hope to leverage the cost of our Advancion 4 storage system by using as much local content as possible and also taking maximum advantage of the &lsquo;Make in India&rsquo; programme, which is Indian prime minister Narendra Modi&rsquo;s flagship scheme to drive manufacturing in the country.

The market fundamentals seem to be very ripe in facilitating the adoption of battery energy storage.

Our first project will start with behind-the-meter applications, but it will soon have the ability to serve front-of-meter as we hope to demonstrate in the coming months and years.

Will future projects be based on commercial sector?

We are providing backup reliability to the commercial and industrial sector &ndash; in this case with our partner Panasonic India. However, we have a number of other applications that we are pursuing. We are looking at demand charge peak shavings, frequency response and other grid ancillary services. We are also looking at pursuing applications with both transmission and distribution companies as well as optimising generation from thermal plants in a similar manner to our original project, which was launched in 2008 in Chile, where we offset the spinning reserves capacity and improved the efficiency of a coal plant.

This is Panasonic&rsquo;s first commercial energy storage project with AES and the companies are working on a roadmap to expand the scope of the partnership to meet the growing needs of the global market.

aes, backup, behind the meter, front of the meter, india, lithium ion, panasonic 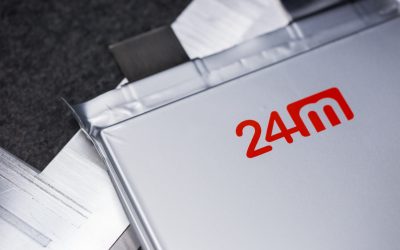 September 2, 2021
An agreement has been signed which could lead to a multi-gigawatt lithium-ion battery cell manufacturing facility being built near Chennai, India, using 24M’s advanced ‘SemiSolid’ electrode technology. 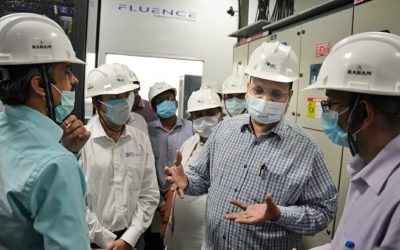