Median bids received by US utility Xcel Energy in a solicitation for energy resources for energy storage paired with solar came in at US$9 per megawatt lower than the previously observed record.

At the end of 2017, Minnesota-headquartered Xcel held an ‘All source solicitation’ for generation assets to be incorporated into its long-term resource planning, issued in late August and with bids received by 28 November. Xcel called the big response to the solicitation “unprecedented”, with some 430 individual proposals submitted, representing 238 projects in total, and 350 of the 430 were renewable energy projects. A similar solicitation in 2013 drew just 55 proposals.

The seeming discrepancy in numbers was due to multiple bids being received for some projects. Some of these ‘duplicated’ bids may have differed in their structure, whether that be the proposed type or length of PPA or project ownership structure being put forward on each bid. Out of those 238 submitted projects, Xcel said 99 of them call for the utility to take some level of ownership stake.

Xcel was at pains to point out that due diligence processes have not been completed on any of the bids and some could still contain so-called “fatal flaws”. Nonetheless, the company offered its listing of RfP responses by technology. Giving neither company names nor bid details, Xcel’s report gave the median bid prices received in each technology class.

Wind with battery storage: 11 bids were received, representing 5,700MW across eight projects, for a total 5,097MW minus duplicate bids. Bids were priced at US$21 per MWh.

Wind and solar with battery storage: 7 bids were received, with 4,048MW, with a corresponding number of projects and megawatts. Bids were priced at US$30.60 per MWh. 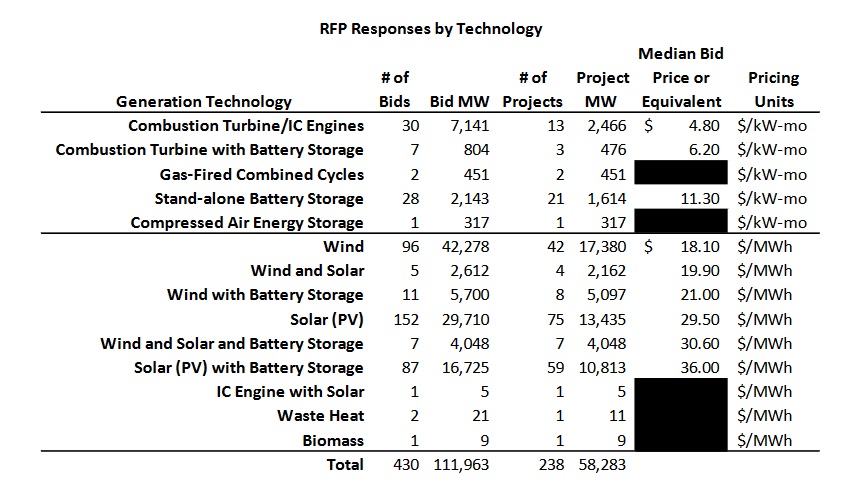 Former GTM Research head analyst, now an advisor to the firm, Shayle Kann, tweeted that the bid prices dropped considerably further than the lowest known solar-plus-storage price to date in the US. That was US$45 per MWh, a “historically low price” as reported by Energy-Storage.News when Arizona utility Tucson Electric Power (TEP) announced it in May last year. Kann said the bid prices came with “a lot of caveats”, but were “incredible nonetheless”.

While the Arizona auction process saw storage added to wind or solar projects for around US$15 per MWh additional cost added to the PPA price, the energy storage portion of bids in the Xcel Energy solicitation appeared to have added just US$3 to US$7 per MWh more to the median bid prices revealed.

In the Arizona case, storage added $15/MWh to the PPA price. Here the combo bids are $3-$7/MWh higher than standalone wind and solar. Lots of caveats (online by 2023, don't know the storage duration, etc.), but incredible nonetheless.