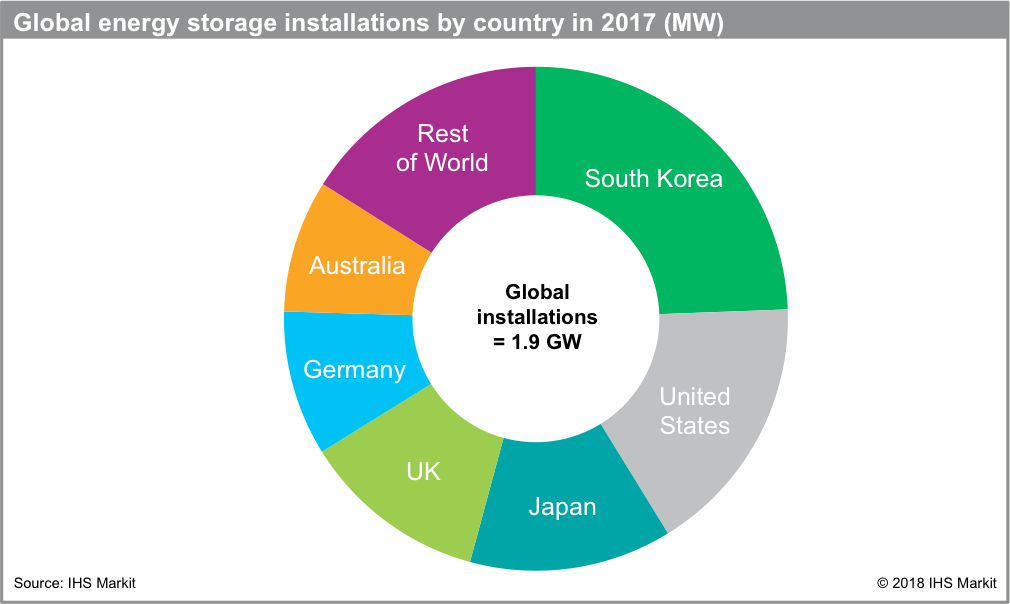 As much as 40% of grid-connected battery storage projects that have been announced worldwide propose co-location with solar PV, from a pipeline of more than 10GW, analysts at IHS Markit have said.

The research firm has just published its analysis of the global battery storage market in 2017, extending into the first quarter of this year. It found that the “global utility-side-of-the-meter pipeline” increased by 2.9GW in Q1 2018 alone, from 7.5GW at the end of 2017 to 10.4GW today. It’s important to note that the pipeline is collated from announced, not completed, projects.

The company is forecasting the deployment of some 3GW this year around the world, a jump up from 1.9GW of global deployments that IHS tracked in 2017. Among the findings was that 40% of the utility-side-of-the-meter (known also as front-of-meter) pipeline consists of solar-plus-storage projects, co-locating batteries with solar.

“We’re not predicting that in the future that’s what 40% of all projects will be, but 40% of the announced pipeline that we’re tracking, is [solar-plus-storage],” Sam Wilkinson, associate director for solar and energy storage research at IHS Markit, told Energy-Storage.News.

“It’s mostly driven by a number of very large project announcements in Australia and the USA. In Australia in particular, there have been a huge number of solar projects that have announced they will add storage at a later date. Some of them are very clearly going to be installed this year, some of them have a much lower, what we would call ‘confidence rate’, that they’ll actually add storage at all. It might be that they’re waiting for a policy change or new business models to evolve,” Wilkinson said.

Co-location can also mean various things. At its most basic level, solar farm owners might take advantage of an existing grid connection to look at installing a battery on the same network, but the batteries and solar might behave entirely independently of one another. Conversely, it can mean the battery system is charging from the solar panels directly and could provide services to the solar farm, such as storing the energy for later use or helping the PV plant to ramp up to meet grid demand. The former would use longer durations, more megawatt-hours of energy, the latter would use shorter durations and respond quickly. Wilkinson pointed out that there does appear to be a trend forming towards that longer duration use for ‘solar firming’ with batteries.

“In the past we’ve seen a lot of storage sited with solar, just to basically make use of a common grid connection. What we are observing is that there are a lot more in the future, projects that are actually providing a service to the PV system, namely, renewable firming. Some of the systems we’re seeing in the States, Hawaii, Australia are adding storage in order to be able to provide a peak output or a stable output longer into the evening or later into the day, than a PV system with no storage would,” Wilkinson said.

Another big finding from the report was enormous growth in South Korea’s energy storage market. The country’s main utility and grid operator, KEPCO, has procured its own large-scale front-of-meter systems directly from providers, while the commercial and industrial (C&I) space is now growing rapidly too.

Wilkinson said a large portion of this could be attributed to new policies for C&I. Essentially a state mandate has been introduced for some facilities to add energy storage to manage peak grid demand.

“Public facilities and state businesses have to have a certain peak grid connection, they have to have storage behind-the-meter. Certain commercial buildings in South Korea are now mandated to have energy storage. It’s one of the major drivers of that market,” Wilkinson said.

Domestic providers have been one of the beneficiaries of that market growth, as they have with front-of-meter storage. Wilkinson asserted that “everything is being served by Korean companies” in that market, with the likes of major battery makers LG Chem and Samsung SDI headquartered there.

Unlike GTM Research’s 2017 report that came out recently, IHS identified South Korea, not the US, as the most prolific national market for energy storage deployments last year. The chart below shows how IHS segmented market share of installations worldwide.

Various macro trends are also identified by the research firm across the world as drivers for ongoing deployment, including the battle between batteries and gas peaker plants in California, policies such as New York’s recently set energy storage target, integrated resource planning by US utilities, Irish grid operator EirGrid’s forthcoming grid services auctions to be launched later this year and subsidy programmes in Austria and Germany for purchases of small-scale and residential energy storage.