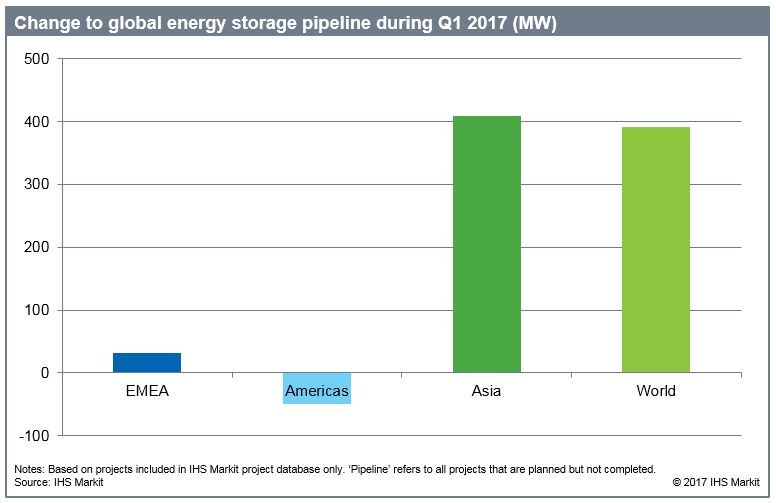 The world pipeline for energy storage on the utility side of the meter has doubled in the past year, reaching 3.4GW, according to new research by I.H.S Markit.

In a Market Insight note published this morning, I.H.S senior research manager Sam Wilkinson wrote that there has also been a recent “divergence in grid-scale battery applications”. While in recent years the majority of large-scale batteries have been deployed for ancillary services to grid networks with short duration of storage, there has been a more recent increase in the number of batteries providing capacity and other services.

I.H.S is predicting strong growth in the sector in the coming years and according to Wilkinson a 390MW rise in the global pipeline over the past quarter was underpinned by major project announcements in China and Australia, with Asia now accounting for more than a third of the existing pipeline. Wilkinson said China, Australia, South Korea and India are going to continue to be important to the world market.

Regionally, EMEA enjoyed a much slower Q1 than it had in the last quarter of 2016. This is because that earlier quarter had seen the UK’s capacity market auctions award a few hundred megawatts to battery storage projects aimed at “keeping the country’s lights on”. Q1 2017 only saw 30MW added to the EMEA pipeline, compared to 400MW added in Q4 2016.

A large number of project completions in the US, not least in California where around 100MW of storage contracts were expedited in response to the Aliso Canyon gas leak (which happened in 2015), meant the Americas pipeline did not grow as much as Asia’s over the quarter.

Wilkinson claimed one of the biggest trends seen in the quarter is the growth of longer duration energy storage.

“The ability of batteries to provide a wide range of applications is critical to the future growth of the market.”