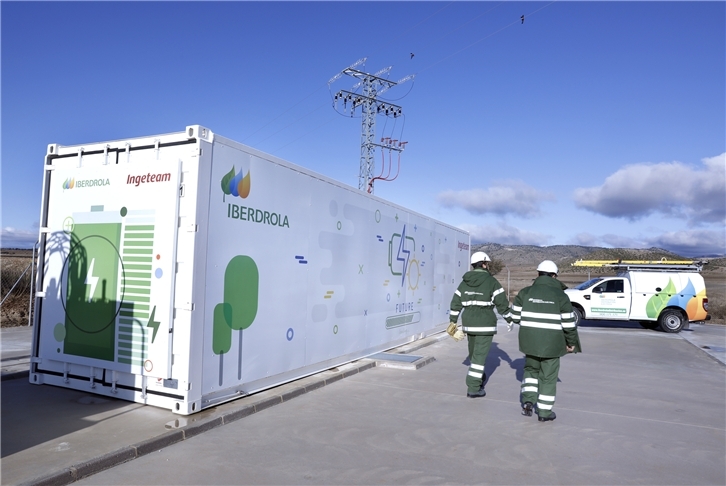 Iberdrola has switched on a multi-megawatt battery energy storage system (BESS) in rural Spain that will enable up to five hours of backup power to local networks in the event of an outage.

It is claimed to be the first distribution grid-connected lithium-ion battery project in Spain. As well as improving power quality and reliability to the local area, it will also aid the integration of solar photovoltaic (PV) resources.

As well as improving the quality and productivity of local power, Iberdrola said the system can also function in isolation from the grid. In the event of natural disaster or other cause of power outage, the project can provide up to five hours of electricity to Caravaca de la Cruz as well as to four other nearby municipal districts, according to Iberdrola.

Iberdrola said the Caravaca de la Cruz project includes a smart controller for the battery’s interaction with several nearby PV plants and adjusts the voltage of their output. As well as intervening in the event of power failure, on a day-to-day basis it can also determine ‘what part of the network’ can run from the battery, taking into account state of charge, photovoltaic production and local electricity consumption characteristics at any given time.

While Spain’s solar and wider renewables market appears to be opening back up, with the exception of molten salt thermal storage for CSP plants and pumped hydro, energy storage development has lagged considerably in the country, despite its abundant sunshine. Indeed, a couple of years ago, it was technically illegal in Spain to ‘self-consume’ (‘autoconsumo’) solar energy rather than export to the grid.

Energy-Storage.news reported on the country's first wind-plus-storage project, by Acciona in northern Spain, that came in at just under a megawatt in 2017. According to the US Department of Energy (DoE) / Sandia Laboratory global energy storage project database, there are only two large-scale lithium projects on Spanish soil, one in Seville and the other on the island of Gran Canaria. There are numerous other smaller, mostly pilot or demonstration projects also listed.

In the instance of the new project in Murcia, bringing reliable grid power to the dispersed rural districts has been a long-standing challenge. In common with other projects around the world to deploy ESS as a non-wires alternative for electricity networks, the building of several kilometres of wires and cables (22km in this case) will be avoided using the distributed storage. i-DE said that it is also spending some EU2 billion (US$2.2 billion) on digitising its electricity networks in Spain, with the company seeing storage systems as “key to addressing the challenges of the energy transition,” according to a release sent out today.