Editor's note: You may have already watched the recent webinar on ultra-capacitors and the role they could play in the energy transition, which Energy-Storage.news hosted with sponsors EIT InnoEnergy, the European Union-backed energy tech innovation accelerator.

In that webinar, market analyst Thomas Horeau of Frost & Sullivan explained that one of the key uses of ultra-capacitors in the renewable energy industry is in ‘feathering’ wind turbines: providing short bursts of stored power to correct the angling of turbine blades to optimise their performance or conversely to prevent damage from high winds.

Also taking part in the webinar was Egert Valmra, product director of ultra-capacitor manufacturer Skeleton Technologies, which supplies devices to wind farm operators for this very purpose. Valmra said that when he first joined the company just over six years ago, he wondered why pitch control for wind turbine blades was necessary.

I was told that if windmills get disconnected from the grid and have less resistance, they can spin out of control. In that moment, it’s crucial to quickly change the pitch of the blade… so that less force is applied,” Skeleton Tech’s EgertValmra said.

The two options for changing the pitch of the turbine blades are to do it hydraulically or electrically. Hydraulic solutions, Valmra said, require “a little bit too much maintenance”. Meanwhile the servicing costs of using batteries for this role and “replacing them every couple of years mean the servicing costs are too high”.

While Egert Valmra gave the viewers a brief and succinct explanation of wind turbine pitch control or feathering using ultra-capacitors in the webinar, this week, we asked the webinar’s main presenter, Johan Söderbom, EIT InnoEnergy’s thematic leader for energy storage and smart grids, to go into a little bit more detail on the connection between wind power and ultra-capacitors, as follows:

‘A better solution that can unlock significant value’

Energy storage devices are critical in wind turbines, particularly for the pitch control system of the blades, which manages their positions in order to enhance yield efficiency or to avoid damages in high wind situations or in the case of grid failures.

Traditional systems for pitch control have depended on hydraulics or batteries to supply power; both of which have their drawbacks including being complex systems that require frequent maintenance and replacement of parts, leading to downtimes. It is estimated that nearly 20%to 25% of all downtime in wind turbines is due to pitch system failures, which is an unacceptable cost in a highly competitive power generation industry.

Ultra-capacitors offer a better solution that can unlock significant value for the wind power industry. They require little or no maintenance and have lifetimes of up to 15 years (compared to 2 years for batteries) which is a key benefit for wind park operators that are highly focused on minimising operating costs to maintain technological competitiveness. Further, ultra-capacitors can store energy with a high efficiency output and have reaction times in milliseconds; this makes them a good fit for pitch control systems that require high power in short bursts.

The lack of chemical substances also leads to high levels of safety and reduces the risk of fire compared to batteries, which is an advantage in remote sites where turbines are often located. Unlike batteries that have a narrow operating temperature band, ultra- capacitors operate between -40 to +65 degrees Celsius, so wind turbines can function efficiently in harsh environments.

The devices do not need any heating or cooling systems, resulting in lower hardware requirements and redesign costs for the turbine manufacturer. This is also a considerable advantage for wind park developers as they can potentially access previously unfavourable sites, especially in the offshore wind sector which is predicted to grow at a rate of nearly 23% to 2025. 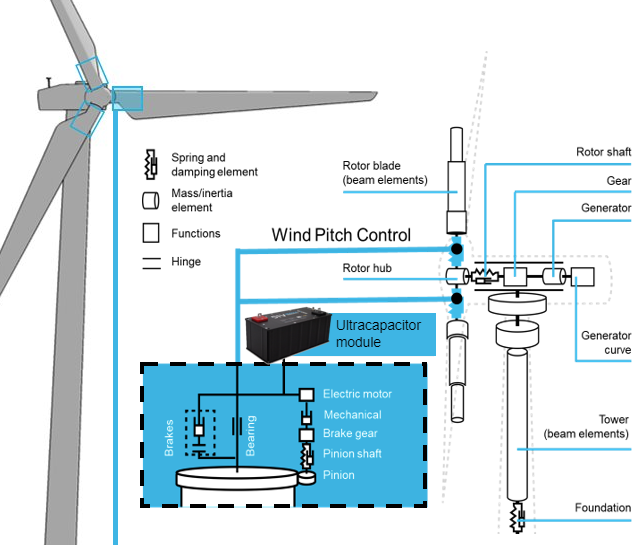 Ultra-capacitors are not alien to the industry; it is estimated that nearly 30% of all wind turbines globally are installed with ultra-capacitor systems with the first systems installed by Enercon in 2006. However, as the energy transition towards low carbon generation technologies gathers pace, wind energy is expected to become an increasingly important component of the renewable energy portfolio and ultra- capacitors potentially have a key role to support the industry in addressing its cost competitiveness challenges.

Frost & Sullivan forecasts that between 55GW to 70GW of wind capacity will be added annually between 2021 and 2025 as turbine costs keep decreasing and the technology nears grid parity in many parts of the globe. Maxwell Technologies, a leading manufacturer, anticipates that ultra- capacitors will be able to completely replace batteries and hydraulic systems for pitch control by the end of the decade; it has introduced ultra-capacitors in turbines in China and Europe, with retrofits introduced in North America.

Ultra-capacitors should not therefore be judged purely on their relatively more expensive cost compared to batteries, but rather the value they provide in reducing the total cost of ownership of the turbine through higher reliability and lower operating costs, and generating new revenue streams from previously inaccessible sites.