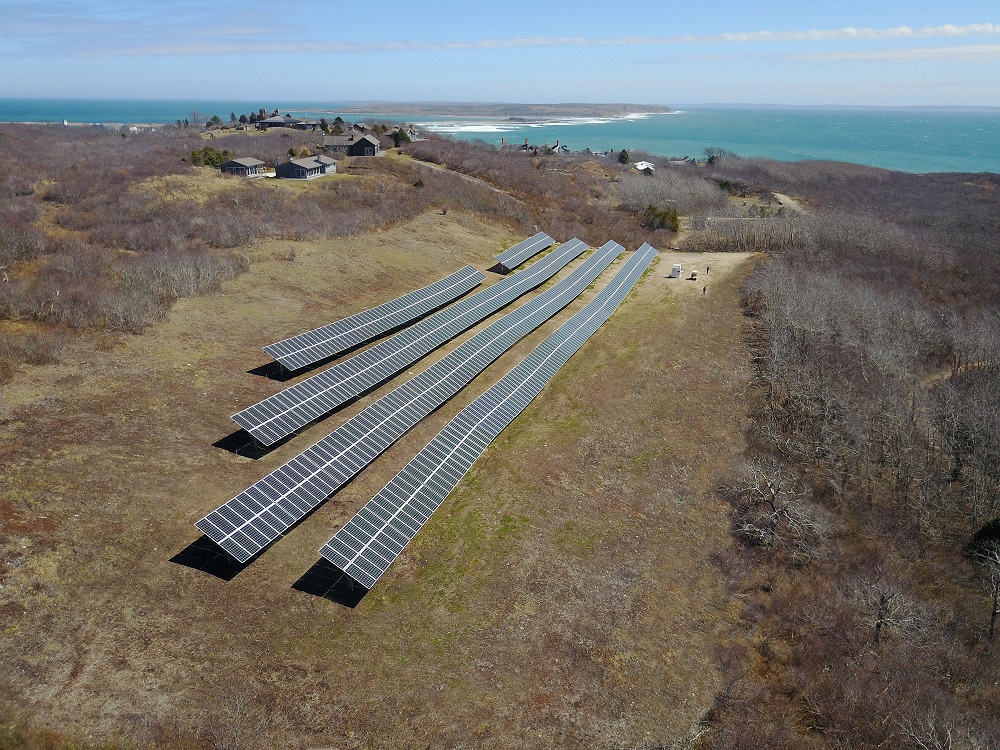 Using just 351.9kW of PV and 1MWh of energy storage in a microgrid, a tiny island off the Massachusetts coast successfully met more than 50% of its electricity demand over summer.

Historic Cuttyhunk Island, just a few miles from Martha’s Vineyard, a summer destination for the rich and famous, has less than 50 residents outside of seasonal tourist peaks and about 300 residents during the summer season.

The island is famous for being one of the trading posts with the British pre-independence but has now found a degree of energy independence for itself. Solar Design Associates, a Harvard-headquartered company, designed and installed the PV array, which has 1,020 panels, and the lithium-ion battery energy storage system.

As with most electrified island territories, Cuttyhunk Island has always relied on burning diesel fuel, which is brought to the island on a barge, which is of course expensive, polluting and relies on supplies being able to negotiate bad weather conditions and other logistics. The project received financial assistance from the US Agriculture Department’s grant scheme for rural electrification projects.

While the new microgrid will not eliminate diesel use entirely, during this year it is expected to reduce consumption by 30,000 gallons, a representative of Gosnold Electric Light Commission, which oversees utilities on Cuttyhunk, said. In fact while helping the residents and visitors to rely on more than 50% renewable energy over summer, during off-season periods, that proportion can rise to 80% renewables.  The massively diminished population numbers in those times are a factor in this – some accounts refer to there being less than 20 residents on the island at some points in the year.

“The microgrid’s performance and reliability have exceeded all our expectations, and we are on track to burn 30,000 fewer gallons of diesel fuel this year,” Gosnold Electric Light Commission’s Paul Elias said.

“That is an excellent benefit for the environment of this unique place and major cost savings for the community.”

SDA to move onto 100% renewable island next

Solar Design Associates provided system design and engineering, assisted with procurements and getting permits, managing construction and commissioning the system. Company president Stephen J Strong described solar-plus-storage as “clearly the next frontier” for renewables and said the Cuttyhunk project “validates the extraordinary benefits this innovative approach can deliver for cost, reliability, and sustainability at community scale.”

The company is now working on a project that would take another island totally off diesel and 100% onto renewable energy. Isle au Haut in Maine, a few hundred kilometres north from Cuttyhunk, will source all of its power from a solar-plus-storage microgrid and thus end the island’s dependence on power transmitted via undersea electric cabling.

While diesel or undersea cable replacement projects were a compelling business case for solar-plus-storage, Strong said, SDA was also delivering solar-plus-storage for a range of utility and commercial and industrial (C&I) customers.

“We see enormous potential around the world for this transformational energy technology,” Strong said.

Other notable microgrid developments reported on by this site in just the past few weeks include the announcement of the Phillippines' first 'unsubsidised' solar, battery and diesel microgrid with 4MW of PV and 8MWh of energy storage and a successful 24-hour 'islanding test' at a microgrid in Illinois by S&C Electric. Recent tenders held by the French government for solar-plus-storage projects on its island territories saw prices drop by 40% from a previous tender round.