Go with the flow: RedT on revenue stacking and the coming of long duration storage

RedT's flow battery stacks being readied for shipping. Image: RedT.
The ability of flow batteries to provide long duration storage without degradation is a tempting proposition for renewables developers. The technology is already being made viable in off-grid situations where it can be used to give communities and businesses a degree of energy independence. However, while the effectiveness of flow battery in islanded situations is quickly being recognised, on the grid, the cost of providing that storage as a renewables integrator is still seen as something of an inhibitor to uptake.

RedT is one of a handful of providers globally that is eyeing on-grid commercial viability for its flow batteries, in a group that also includes VionX, Imergy and Vizn Energy. Headquartered in the UK, the company&rsquo;s own vanadium redox flow devices have been in development since 2000, with 18 "market-seeding" devices currently being deployed and a second generation model nearing launch. Andy Colthorpe spoke with the company&rsquo;s CEO, Scott McGregor, to get his views on how flow batteries can thrive &ndash; and why lithium-ion is not the enemy.

How a flow battery uses liquid electrolytes to store energy. Image: RedT.
How important is the ability to provide stacked benefits (i.e. multiple services from the same device or system) to the value proposition of flow batteries?

Typically our customers are seeing a four to six hour range as optimal at full power. But then because it&rsquo;s a non-degrading product, our customers want to use this as much as possible during the day to provide as many services as possible because they can &ndash; and they can either save costs or make money.

So that&rsquo;s why you get into the revenue stacking business. I describe it as an asset like an aircraft. You want high utilisation. You wouldn&rsquo;t run an aircraft at 20% passenger levels. That&rsquo;s what long duration or long-term storage is about. You might buy cheap one hour backup and only use it half an hour a day but when you&rsquo;re talking long duration storage, you then want to use it to do many cycles of energy storage per day.

Regulators and analysts seem to be starting to understand how important stacked revenue streams could be. Have you had to continue to adapt the business models as well as the technology?

I&rsquo;d like to think we invented the idea but I can&rsquo;t take the credit!

It has been predicted for quite a while that when you get above three hours [duration] or above power demands of 5kW, a flow battery is a suitable technology (see Fig. 1). Conventional batteries just by their nature don&rsquo;t fit that market. Lithium, as a technology I love it, it&rsquo;s brilliant. But it&rsquo;s [suited for] sub-three hours&rsquo; duration.

It&rsquo;s been predicted that 30% to 40% of the energy storage market will be satisfied by the flow battery&rsquo;s technology and really what&rsquo;s held up that technology coming to market is going from a lab to a prototype to a commercial mass market. That&rsquo;s taken time for the flow battery industry to do. That&rsquo;s only the first step &ndash; it has to come to market at the right cost. Once you do that, that long duration storage market suddenly becomes available.

Customers want the storage but until the technology and the costs come right, it&rsquo;s not there to buy.

Going back to revenue stacking, it&rsquo;s quite obvious that people have talked about distributed generation, distributed storage, balancing grids and collapse of grids, grid services and local services, that&rsquo;s what storage enables and unlocks. And then passing the tipping point on renewables, going beyond 20% to 30% on the grid, just cannot happen until we have long duration, good, heavy duty storage.

As for what those revenue stacking opportunities are; that work&rsquo;s being done across a number of prototype projects across the world. If we put storage here, what can it save the network? What benefit can it provide to the local end-of-line customer? There are a lot of cost-economic studies being done on whether you could save a billion on replacing a transmission line down the corner when storage could cost half of that, that sort of economic trade-off, for example.

Fig 1. Image: RedT.
You mentioned that you &ldquo;love lithium&rdquo; &ndash; can you briefly explain how the competitive landscape might accommodate flow batteries as well as more &lsquo;conventional&rsquo; devices?

First off, I love lithium as technology so I won&rsquo;t say anything bad [about it]! It&rsquo;s a different product. Lithium is a conventional battery where you store power and energy within a cell. So no matter how good the technology developed is, it will have degradation and depth of discharge issues. That is by nature, it will never change. Lithium is fantastic for sub-three hours for storage.

We see that in, say, two to five years you&rsquo;ll see the market to become a bit of a hybrid market. Customers will want to couple a flow battery with lithium, or lead acid batteries, so your lithium or lead battery is your power solution and your flow battery is your energy solution. The flow battery should in practise do 80% of the work and be a hard-working asset and the lithium will be to deal with power spikes and other short term services.

Say there&rsquo;s 100% of the potential market, I think only between about 10% or 20% or that market currently has products going into it, that&rsquo;s where lithium or lead are going, but all the other services that will be required in that market, once other technologies come on board as well and lead and lithium keep getting better, we&rsquo;ll keep expanding those markets.

RedT will be among the attendees at Solar Media's Energy Storage Summit at Twickenham Rubgy Stadium, London, on 28 April. The event - featuring 40 high-level speakers and three streams (residential, commercial and utility scale) - will address all the key issues related to storage deployment.&nbsp;

December 6, 2021
News in brief from around the world in energy storage, this time focusing on long-duration.

November 24, 2021
The government of Queensland will commit “at least AU$10 million (US$7.21 million)” to building a multi-user vanadium processing plant to capitalise on natural resources in the Australian state. 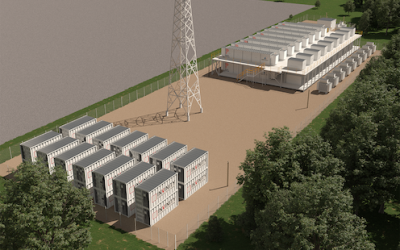