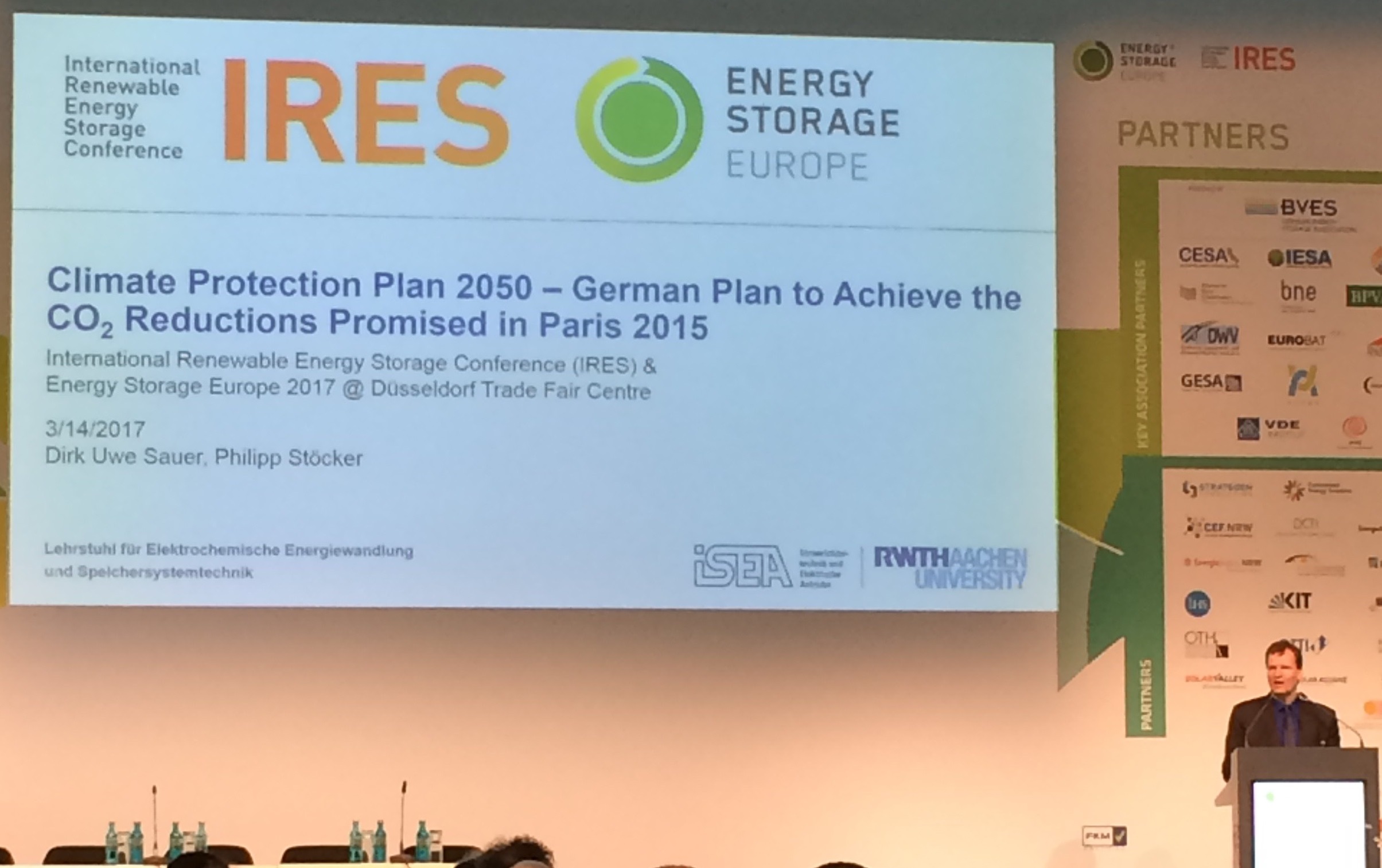 While Germany is one of the world’s leaders in solar PV and now an early leader in residential energy storage, utility-scale energy storage is still “under discussion” and not yet a mature proposition, industry figures have said.

“The German market as far as I know is pretty much mature when it comes to residential, when it comes to utility-scale and C&I (commercial and industrial) however, to me it is still a lack of regulations and policies which [stop the market from maturing],” Dario Cicio, global application manager for energy storage systems at global technology group ABB, told Energy-Storage.News at the Energy Storage Europe conference and exhibition in Dusseldorf.

About 50,000 residential energy storage systems have been sold in Germany in the last four years, with ABB among those showcasing a residential product at the show this week, a scalable inverter and 2kWh battery that can be configured to fit three units for a total of 6kWh, allowing households with PV systems to maximise their onsite self-consumption. Germany’s high installed base of residential PV has made it a hotbed for modest but steady growth in the home storage market. The show, which in previous years had appeared to be heavily weighted towards utility-scale solutions, featured a large number of domestic makers of residential systems, such as Solutronic and E3DC which are not heavily promoting their products outside Germany as yet.

ABB was also showcasing an energy storage inverter which can be scaled from 1MW to 100MW but Ciccio said that interest for very large storage systems seemed to be more intense from regions that included the UK, California, Texas and the PJM Interconnection market in the US and regions of Asia such as China, Korea and Japan than from Germany. While Germany has seen a number of high profile pilot projects go online at utility-scale, Cicio said this interest appeared to have slowed, with outsiders as yet not keen to risk their money on storage at scale.

“We see that there were some major projects in Germany [that] some utilities did, today we see that it’s not really moving fast [as a sector]. The utility-scale projects are very slow, from what I see now,” Cicio said.

“The Energiewende (Germany’s ‘energy transition’) to me is still somehow… investors, are still afraid to make the investment if there is no good balance to move in this direction.”

Nonetheless, one of the early actors in that initial phase of utility-scale projects, Younicos, argued that its work on Europe’s first commercial battery park for utility-grid operator-power provider WEMAG could help inform the market on how investors could be enticed and reassured.

Alexander Schoenfeld, sales manager for the EMEA region with Younicos, said that the project showed how to get the best out of large batteries without wearing them out, and to be able to combine applications, and therefore to “stack” revenue streams. Carefully managing the state of charge (SOC) of the battery also meant a significant reduction in operating expenditure too, Schoenfeld said.

Speakers in conference sessions at the show often referred to energy storage as a critical and desirable tool to add flexibility and adaptability to energy networks in Germany, especially in light of the country’s ambitious emissions reduction pledges at COP21 in Paris 2015. Prof Dirk Uwe Sauer of RWTH Aachen University said that not only are the country’s 2030 goals – which include CO2 reductions of 50% from 2014 levels – “really ambitious”, but that given the long lead times for investment into energy and infrastructure, 2030 is so close that it is “almost today”.

ABB’s Cicio said that too much uncertainty remains over the role of large-scale storage in energy networks. He said it is still not clear “who should own and operate [storage], the TSOs (transmission system operators), DSOs (distribution system operators), utilities or power generation companies”. Cicio added that for some ancillary services for the grid, technical specifications are not laid out as clearly as they could be, for example the required response times and storage durations for frequency regulation.

Meanwhile, Michael Entrup, a managing director in the business unit of reserve power at Hoppecke, echoed something else that Prof Sauer had mentioned, that energy market design needed to recognise taxation and regulation issues fairly. For example, costs are incurred for transporting stored energy around the grid, and the EEG (fiscal policy to raise money for the Energiewende) leads to costs being paid for energy distribution.

Otherwise Entrup said, storage was “well supported” in Germany, with Hoppecke also launching a containerised energy storage product for utility, C&I scales as well as the obligatory household systems. He said his company did not particularly desire subsidies, due to the distorting nature of their effect on the market, while the regulation framework required to make subsidies work could “slow down the market”.

Similarly, Younicos’ Alexander Schoenfeld said that from a regulatory point of view, all storage companies are asking for is a level playing field, rather than being treated unnecessarily favourably over other technologies.

According to Schoenfeld, in the meantime within Germany Younicos is seeing increasing interest at the C&I level. Schoenfeld also said that one way to counter the lack of scale of the utility-scale storage market is the continuing standardisation of products and solutions.

“[The industry has to move] to standard products, to standard technologies, standard interfaces and standard business models and that’s something that’s required right now,” Schoenfeld said.

“Everyone will fail right now if vendors are not able to deliver business-as-usual, in meeting this….liability-wise, technlogy-wise, standard-wise, meeting local standards, for example fire protection and health and safety topics, if those things aren’t met by standard solutions, storage will never meet a roll-out scenario.

“People in the industry say storage is getting large but large means roll-out, and utilities and large C&I clients will only do roll-out when the technology fulfils standard criteria for the business-as-usual model. That is the change we see in the market and anyone not supporting business-as-usual will fail,” he added.