Germany: Growth in home and industrial sectors but large-scale battery storage slowed down in 2019 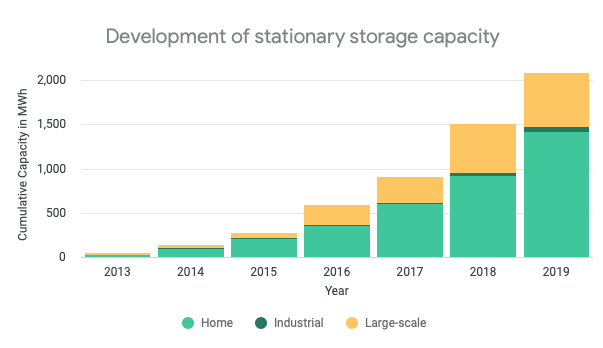 Around 2.1GWh of battery storage had been installed in Germany by the end of 2019, in households, at commercial and industrial (C&I) facilities and at large-scale in grid-connected applications.

While the home energy storage market and industrial segment both grew last year and are expected to continue growing, the large-scale segment slowed down and saw just nine projects deployed in the country during 2019, according to research gathered and analysed by academics at RWTH Aachen University, research group Forschungszentrum Jülich and battery expert group ACCURE.

Economics are challenging for large-scale projects

In 2018, 22 large-scale projects (>1MW rated output or >1MWh capacity) went online. This slowdown at grid-scale came largely as a result of the falling revenues battery project owners and investors can expect from providing frequency containment reserve (FCR). The research team pointed out that FCR is almost the sole source of financing for large-scale storage in Germany, meaning that the saturated nature of the market makes the economics more challenging.

In other words, it could be said that batteries are a victim of their own success, having been able to provide the vital grid-balancing service quickly and efficiently and subsequent competitive auctions for FCR have pushed prices down. The market rose quickly and there had been 68 projects installed by the end of 2019 cumulatively, adding up to 400MW of power and 620MWh of capacity. The nine projects added in 2019 totalled 54MW / 62MWh.

Prices declining to around €1,000 MW/week (US$1212) at the beginning of 2020 from around €1,500 the year before have made the market “increasingly unattractive to new participants”, the research paper: ‘The development of stationary battery storage systems in Germany – status 2020’, said.

However some promising developments are on the horizon in the near term. Earlier this year the German network regulator Bundesnetzagentur approved proposals by grid companies to create so-called ‘virtual transmission lines,’ in a big undertaking called GridBooster. As the paper points out, this should include two projects of 100MW / 100MWh each and another of 250MW / 250MWh providing redundancy and spare capacity to large transmission lines.

The projects, which are expected to go into operation in 2022 should save the transmission network operators big sums of money and long development lead times versus building out conventional transmission system infrastructure. They should also offer some uplift to the market outlook for the large-scale sector, adding 450MW / 450MWh to the cumulative capacity figure in one move. A much smaller set of pilot projects is planned along similar concept lines in France.

Also providing a drive forward for large-scale systems will be the government’s recently introduced ‘Innovation Tenders’ – renewable energy facilities’ auctions that carve out some capacity for solar or wind projects combined with energy storage. The introduction of these tenders was recently described as one of the rare positive aspects of the German government’s plans to overhaul renewable energy laws.

Growth continues as prices fall in residential and industrial segments

That 2.1GWh of total installations was largely accounted for by small-scale residential systems. Around 60,000 home battery storage systems were sold and installed, adding up to 250MW / 490MWh, during 2019. There are now around 185,000 such systems in total in Germany, which the researchers said adds up to about 750MW / 1,420MWh.

In every segment of the German market lithium-ion is the most popular choice of battery chemistry by some distance. With battery storage available for as low as €700 per kWh for medium-sized systems and average prices at about €1,100 per kWh including power electronics for systems between 5kWh and 10kWh capacity, there is good transparency in storage pricing for small to medium-scale, the report said. Many homeowners that choose battery storage are also choosing related products such as heat pumps.

Motivations for buying home storage systems largely focus on “hedging against electricity prices” or individuals wanting to play their own role in the transition to cleaner and renewable energy. According to a registration database created by the German Federal Network Agency, around 20,000 new systems were registered between the end of 2019 and the beginning of May this year.

Finally, the commercial and industrial (C&I) saw strong growth last year proportional to a fairly small starting point: while it is difficult to gain clear public data on installations to date, the Federal network agency’s register saw 700 industrial storage systems (>30kWh to 1MWh) added to it since the register was opened in early 2019. This equated to around 27MW / 57MWh of cumulative installs.

The researchers and analysts noted that the market is expected to grow. There is a range of available use cases for industrial energy storage in Germany, through which energy storage system users can save or make money. These include peak shaving, self-consumption of renewable energy and buffering electric vehicle (EV) charging solutions from causing a strain on the electric grid.

The full paper, from The Journal of Energy Storage, can be viewed at Science Direct, here.

Researchers involved in the report wrote about a previous edition of the paper for Energy-Storage.news and PV Tech Power published back in October 2019.