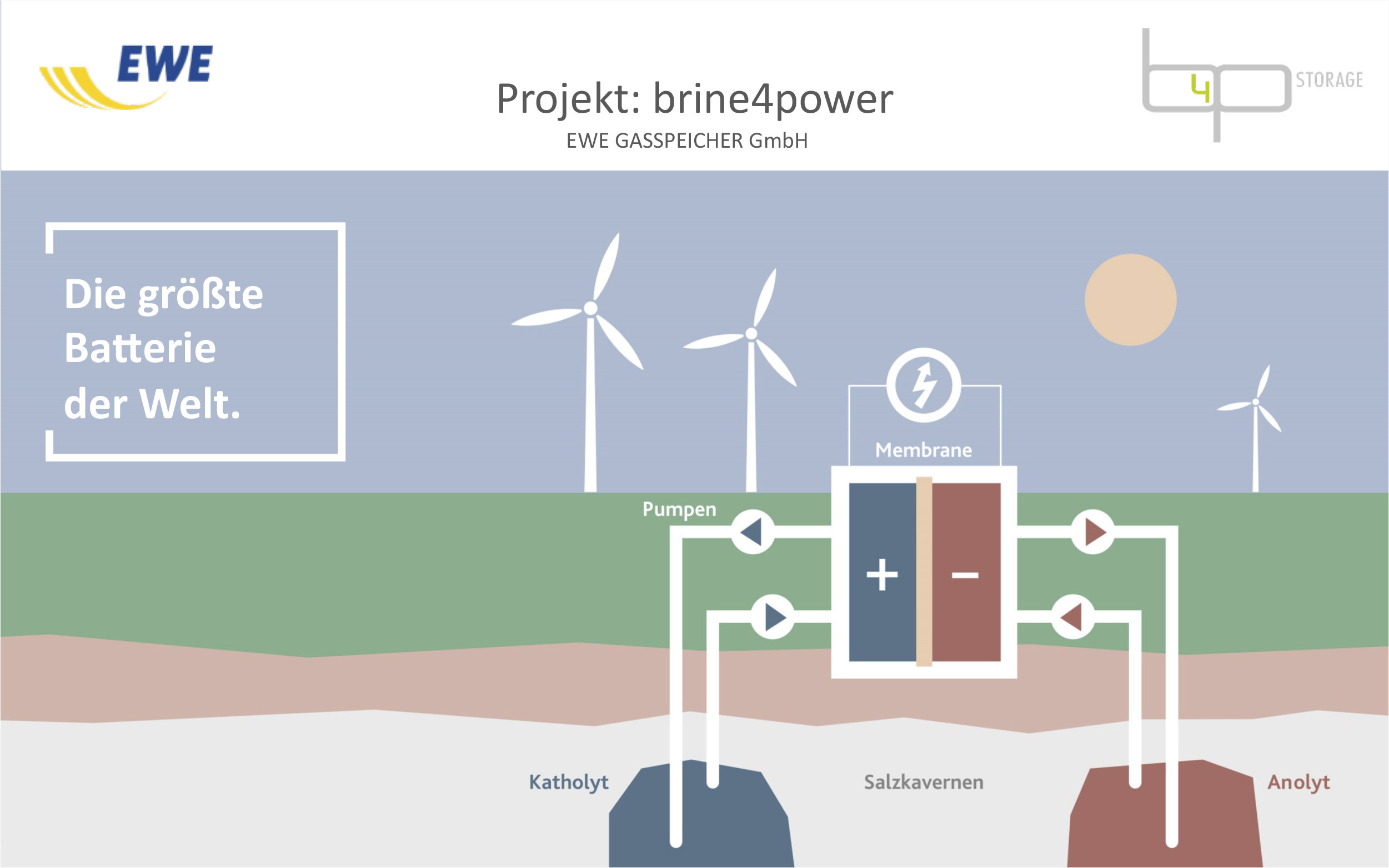 One of Germany’s largest utilities wants to build what it says could be the biggest 'battery' in the world to date – using underground caverns filled with saltwater as a giant redox flow energy storage system.

EWE GASSPEICHER, a subsidiary of utility EWE based in Oldenburg, northern Germany, said a few days ago that it wants to construct redox flow batteries inside underground salt caverns currently used for storing natural gas.

Calling the project brine-for-power (b4p), EWE is collaborating with Friedrich Schiller University in Jena, about 500 kilometres from Oldenburg. The university developed the components to use in the battery, including saltwater and recyclable polymers for plastic parts.

EWE did not reveal how big the system would be in terms of capacity or power output. However, EWE GASSPEICHER managing director Peter Schmidt said the storage system could be large enough to “supply a major city such as Berlin with electricity for an hour”.

“If everything works, this may fundamentally change the storage market, i.e. the market for control energy,” Schmidt said.

System could be operational by 2023

Redox flow batteries store energy in liquid electrolyte, the amount of which can be scaled up to meet capacity demands. While bulkier than lithium-ion battery systems, redox flow systems do not degrade through heavy charge and discharge cycles, meaning they are expected to last many years londger in the field. Companies such as redT, VIZn and Primus Power have already taken flow batteries to market, with this 2016 interview with redT CEO Scott McGregor a good primer on the basics.

The university team then hit upon the idea of using the underground salt caverns as containers for the electrolyte. The underground caverns are often vast, offering potential for storing large amounts of energy. Initially, the project’s battery will be constructed and contained in plastic containers at another site before being transferred into the caverns.

“We need to carry out some more tests and clarify several issues before we can use the storage principle indicated by the University of Jena in underground caverns. However, I expect that we will have an operating cavern battery by about the end of 2023,” brine4power project manager Ralf Riekenberg said.

The largest flow battery currently in existence is a 15MW / 60MWh project in Japan by Sumitomo Electric Industries. However UniEnergy Technologies and Rongke Power are building up to 10 systems, each of 20MW / 80MWh in China. Meanwhile the US’ recently unveiled largest flow battery system to date also involved UniEnergy Technologies and is a mere 2MW / 8MWh, the same size and capacity as another US system in California.

The latest EWE announcement also appears to echo the ambitions of another big project in Germany in some ways – a disused coal mine in Northern Rhine-Westphalia will be converted into a pumped hydro plant, in another example of repurposing fossil fuel facilities to be used for electrical energy storage.