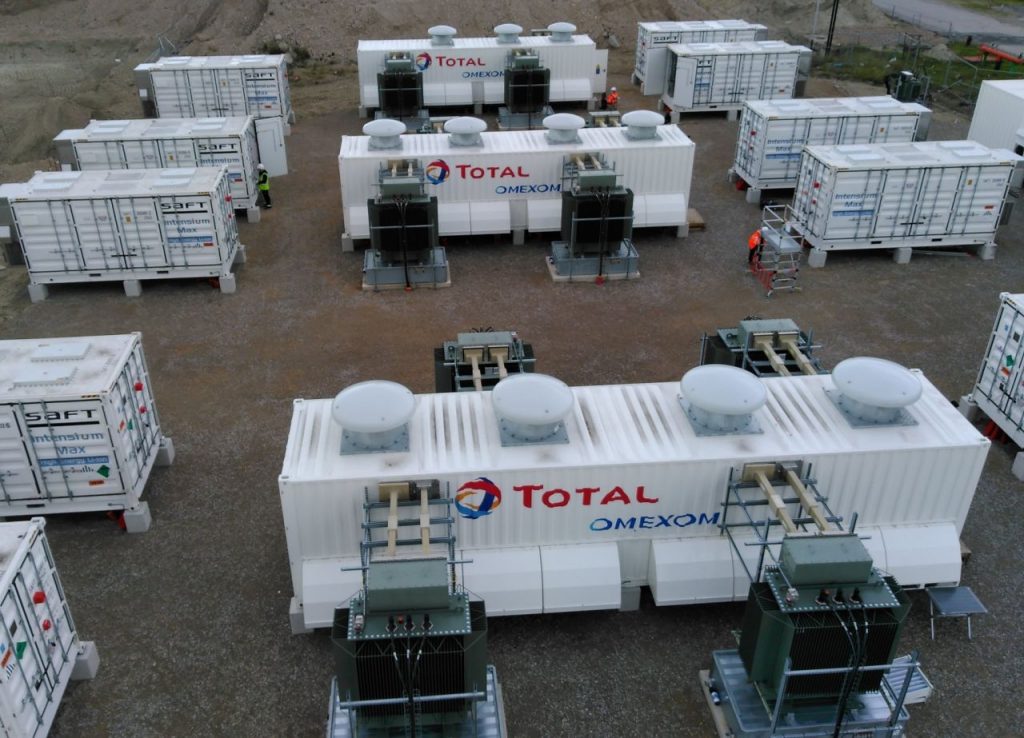 The project in Dunkirk, France, with the three or four transformer “building blocks” connected to the PCS units, surrounded by battery storage containers. Image: Total / Omexom.

France-headquartered multinational energy company Total was contracted by RTE for the project, which has 25MWac rated output and 25MWh of storage capacity. It has been built at the site of a former oil refinery operated and owned by Total in Dunkirk, in northern France.

The lithium-ion battery energy storage system used for the project was provided by battery and energy storage provider Saft, which Total owns. Engineering procurement and construction (EPC) duties including civil works and system integration services were provided by Omexom, which announced the project’s completion in late January. Omexom said the project “is now in operation and provides 24/7 services,” connected to RTE’s extra high voltage transmission network via a 90kV grid connection point.

Last year, Energy-Storage.news hosted a sponsored webinar with Saft on the importance of flexibility in energy storage system design and operation. This included a close look at the Dunkirk project as a case study: Saft’s head of innovation Michael Lippert discussed the technical solution provided to Total, while developer Total Solar’s VP of energy storage Daniel Lacombe spoke about the intention and scope of the project.

As the project’s developer, Daniel Lacombe said the Dunkirk system will participate in the Frequency Control Reserve (FCR) market, providing Primary Reserve power – reacting to deviations in frequency of the grid network that can cause problems with the stability of local electricity supply. Battery storage systems can do this within seconds, or even fractions of a second. Traditionally these services would be provided by fossil fuel power plants but battery storage can respond much faster and without creating harmful pollution or emissions onsite. France is in Europe's common market for FCR along with five other countries, with daily auctions designed to keep the grid operating at 50Hz. According to market analysis firm IHS Markit, around 700MW of battery storage has been deployed in Europe to serve this harmonised, cross-border market – around half of the continent's installed base of advanced battery storage.

Lacombe said however that although the initial use case and revenue opportunity will be in FCR, during the expected 15-year lifetime of the project, Total is aware it may have to switch to providing other services instead of, or in addition to, Primary Reserve.

Lacombe said Saft was chosen for two main reasons: firstly Total believed its subsidiary’s BESS solution would be fit for purpose and secondly that it would be an economical solution to leave Total Solar in a “competitive position in the marketplace”.

Total has been awarded 130MW of energy storage contracts in total by RTE in a 2020 auction and the Dunkirk project will be followed by four more projects to which Saft is contracted to supply system solutions. Lacombe said that “repeatability and robustness” were important considerations in system design, along with the flexibility to be able to change or combine services for the grid that the battery storage can do.

Saft’s Michael Lippert said in the webinar that the 25MWac peak power system is made up of 11 Saft Intensium Max High Energy containerised battery storage units, each of 2.5MWh storage capacity and connected to three groups of power conversion systems (PCS). In turn, each of those uses three or four low voltage/medium voltage (LV/MV) transformers. Lippert said that this configuration of three or four transformers will serve as the “building block” of the other projects that Saft is delivering for Total’s RTE-awarded projects.

Before building the system, Saft simulated multiple use case scenarios for the battery system that Total asked to evaluate. For example, Michael Lippert said, there were two options of FCR services simulated: one with full power at 200 millihertz frequency deviation and another at 100 millihertz frequency deviation. While the second could lead to “much higher power density and energy throughput,” trying these multiple use cases meant that Total Flex – the flexibility aggregation division of Total – could optimise its remuneration from the project by using one strategy or another.

France’s installed base of grid-connected energy storage systems so far is not vast, meaning that the Dunkirk project, while modestly-sized compared to numerous projects around the world, is thought to be the biggest project in the country so far. Some of France’s island territories have got fairly sizeable battery storage systems to underpin their local energy autonomy, but in continental France, development is still at a relatively early stage compared to say, Germany or the UK.

There are some changes coming on the horizon: Project RINGO is an RTE pilot project to use energy storage as “virtual transmission lines” which will see around 98MWh of batteries deployed and has been in development for a couple of years. More recently, RTE also said it was seeking potential providers of flexible energy to enable it to solve grid congestion issues, which consultancy Clean Horizon has said could lead to opportunities for battery storage in future, although that remains at an early stage. The country also held one of Europe’s first Capacity Market auctions in early 2020 which included a low carbon requirement, leading to the award of about 250MW of contracts.