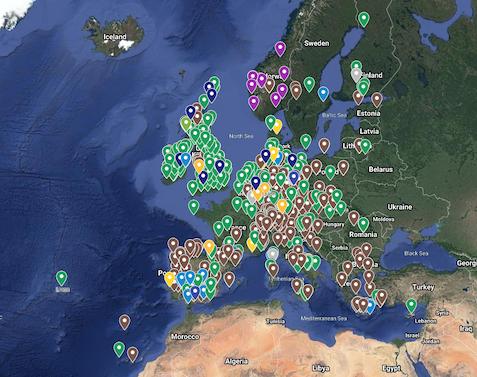 France, Italy, Spain and Belgium are among the regions of most interest for energy storage stakeholders in Europe, analysis firm Clean Horizon has told Energy-Storage.news.

Clean Horizon’s CEO Michael Salomon and senior analyst Corentin Baschet said in an interview that they had not yet seen drastic impacts from the COVID-19 pandemic on activity in the sector in Europe, before looking ahead to some of the markets where they have been tracking likely upcoming opportunities.

Earlier this year, Baschet had described some of the key dynamics for the development of storage, with a main focus on batteries, for this site. The analyst pointed out then that policy and regulations as well as market dynamics are fundamentally different to the US, where utility procurements have driven a fast-growing market for solar-plus-storage as well as standalone storage, and high electricity prices for commercial and industrial entities have driven both the front-of-meter and larger behind-the-meter segments.

In France, a recent introduction of low carbon requirements for some capacity mechanism auctions means developers are “most likely studying” how they will deliver their projects. In Italy, Michael Salomon said, Clean Horizon has been “expecting things to develop for a few months,” after the launch of a new ancillary service similar to enhanced frequency response (EFR) as seen in the UK since 2016.

Spain meanwhile has introduced a 2.5GW target for batteries by 2030. However, Michael Salomon said, it appears difficult if not “impossible” to make a business case for this large level of adoption as yet.

“I think everybody knows that and the government does [too]. They have put together a consultation to ask for advice about regulations – not just for storage, in general, what kind of regulations it should push forwards for our space and for the renewables space in general,” Michael Salomon said.

“We are going to respond to this consultation. All the stakeholders that have an interest in storage know that Spain is going to have something, at some point. So that’s interesting to us”.

For the moment, although across Europe the likes of the German storage association BVES have advocated for the important role of the technologies in the continental energy transition, with BVES policy expert Valeska Gottke blogging for this site earlier in the year that energy storage should be considered one of the main “pillars” of the transition, Clean Horizon sees Belgium as the other likely next big opportunity.

“We took a look at Belgium: it’s an interesting country, especially with secondary reserve opening to batteries. That’s really what we’re looking forward to, because even though it’s opened up in Germany, that didn’t really launch any projects because the requirements were quite high in terms of storage duration. So Belgium’s market design might be more suitable, plus might have higher revenues,” Michael Salomon said.

“The generation fleet in the country lacks flexibility, the nuclear fleet is old, they have one big combined cycle gas turbine (CCGT) and it doesn’t have the flexibility, doesn’t have a lot of hydro, etc. The thermal and nuclear fleet is very old so that’s going to have an impact, [and] has to have an impact on the prices of secondary reserve, in general.”

EASE maps out facilities based on European Commission study

After an independent study published by the European Commission said energy storage has a role to play in providing “flexibility on all timescales”, the European Association for Storage of Energy (EASE) has mapped out the continent’s facilities.

The study was made available in several languages in May and can be found here. It explains that “an appropriate deployment of energy storage technologies is of primary importance for the transition towards an energy system that heavily relies on variable renewable energy system (RES) technologies to be a success”.

Meanwhile, the EASE map, “Energy storage facilities in Europe 2020”, can be found on Google Maps, here. It is based on the database from the European Commission's Directorate General for Energy study, which in turn was taken from various sources and colour-coded by technology type, it includes projects at various stages of development. These include existing projects, projects that are in the bidding process to find developers, as well as major announced and already-awarded projects, such as the three battery facilities awarded by France’s grid operator RTE, in its Project RINGO virtual transmission line “experiment”.

A report published by EASE and analysis firm Delta-EE earlier this year forecast that despite a downturn in 2019, big things are still expected in Europe's energy storage sector in the near future.