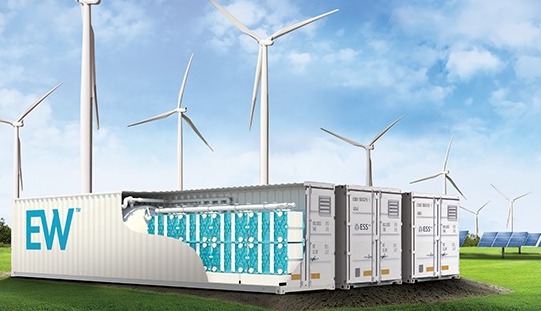 ESS Inc, currently the only maker in the world of a commercially available flow battery using iron electrolytes, will deploy an energy storage system with more than six hours duration to a microgrid in Chile.

The company’s flow battery will be integrated with renewable energy in the microgrid, to help a local utility reduce its reliance on diesel generators in the unspoiled Patagonia plateau which extends across southern Argentina into Chile. ESS Inc will install a 300kW / 2MWh version of its recently-launched Energy Warehouse battery energy storage system (BESS) for the utility, Edelaysen.

Edalaysen’s grid is served by run-of-the-river hydroelectric turbines, but these vary seasonally in output and are not sufficient to meet customer demand all year round, so diesel is called into action several times a year. ESS Inc claimed that its battery’s installation as part of the renewable microgrid will enable Edelaysen, a subsidiary of Chilean utility group GRUPO SAESA, to cut three-quarters of the diesel generator use it currently runs. Work is already underway on the project and is expected to be completed later this year, with the battery storage system expected to last 25 years in operation.

“Our analysis showed that if they used lithium-ion batteries, Edelaysen could only shut down their diesel gensets for about three months per year. Instead, our long-duration iron flow storage system will reduce the need to run them by three times as much – the equivalent of nine months a year. That’s a huge reduction in emissions, noise and cost,” ESS Inc CEO Eric Dresselhuys — who joined the northwest US-headquartered company earlier this month — said.

ESS Inc has long argued that its systems pose far less fire risk than lithium-ion batteries but that the iron solution used for electrolyte is cheaper than the vanadium used by rival flow battery companies. Even if the electrolyte were to leak, the company has said that third-party safety research showed the contents of the battery to be basically fertiliser. The company scored a notable win for its bankability when insurance company Munich RE gave its backing for a 10-year extended warranty, which it offers customers. Former CEO Craig Evans, one of the company's co-founders and now its president, told Energy-Storage.news in a previous interview that “it's not that other companies don't want to do iron electrolyte flow batteries, but that they can't,” due to ESS Inc holding key patents and IP.

“ESS Inc.’s long-duration iron flow battery will greatly reduce the need to run generators to meet demand. We also highly value that the system is safe, earth-friendly, and will operate at full capacity for at least 20 years without replacement – these were critical decision factors,” GRUPO SAESA’s marketing manager Marcelo Bobadilla said.

The project is actually the second battery storage system augmenting run-of-river hydro in the Patagonia region that this site has reported on in the past few months. Two hydraulic turbines and a 115kWp AC-coupled solar PV system has been paired with a 144kWh lithium-ion battery storage system from German technology provider Tesvolt at Patagonia National Park, which was founded by the husband and wife team Douglas and Kristine Tompkins, who respectively founded North Face and was the former CEO of Patagonia.