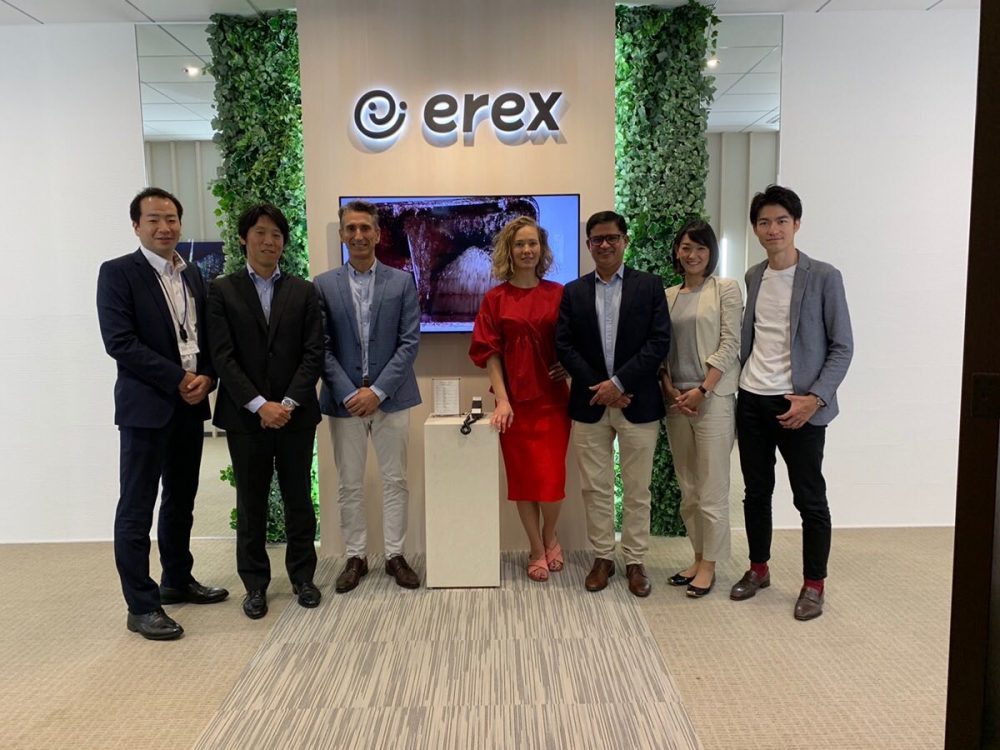 eRex, Power Ledger and Sharing Energy representatives at the launch of their P2P proof of concept trial in October 2019. Image: Power Ledger.

Peer-to-peer (P2P) energy trading using distributed battery storage in Japanese households could be a scalable business once prohibitive rules change in a couple of years’ time, a provider of renewable energy equipment in the country has said.

Sharing Energy is a startup headquartered in Tokyo which has launched a third party ownership model for solar PV systems roughly similar to business models operated by the likes of Sunrun in the US. The company offers residential power purchase agreements (PPAs) for the provision of solar PV systems.

Contracted for 20 years, ownership of the PV systems is transferred to the household after the first 10 years in the no-money-down deal. Sharing Energy business development head Kaz Iguchi told Energy-Storage.news that while the company is at about 800 such contracted agreements so far, the overall market could number as many as 26,000,000 households in total in the coming years.

While Japan’s renewable energy sector got a huge boost following the Great East Japan Earthquake of 2011 – after which nuclear facilities were shuttered and the central government launched a premium feed-in tariff (FiT) policy a year later – the national ambition for renewables remains at a target of 22% to 24% of energy demand by 2040.

Nonetheless, it appears that the imperative towards greater shares of renewable energy has shifted from the central government’s direct subsidy mechanisms onto a combination of market-led initiatives and local government schemes.

For instance, Iguchi said, the Tokyo Metropolitan Government offers healthy incentives to providers of solar PV systems of about ¥100,000 (US$942) per installed kilowatt of capacity, while the Prefectural governments of Kanagawa and other regions offer similar subsidies. Kanagawa Prefecture is targeting meeting 45% of total electricity demand with renewable energy by 2030.

Those schemes can be enough for customers to almost get PV systems for free, while Sharing Energy and others have made partnerships with home builders, in a country where roughly a million new houses are built every year – in Japanese culture it is customary to move into a new house, for those that can afford them.

There had been a policy floated for all new homes to be ‘Zero Energy Homes’ (or net zero) as standard from 2020, but “users aren’t quite ready to accept that cost yet,” Iguchi said.

“For now, they can get PV for free,” Iguchi said, with Sharing Energy striking up partnerships with homebuilders across most of Japan, who are now offering solar PV and batteries installed with new homes as a sales tactic.

Laws expected to change in two to three years

The energy business in Japan is changing – there are hundreds of newly registered retail electricity providers beginning to participate in a market which was previously a series of regional monopolies held by big utility companies. Sharing Energy is one of those new entrants, and is preparing to begin providing energy from 2021.

“If we provide PV systems to users, for a 4kW system, the electricity generation capacity will be about 5,000kWh a year. [Under our business model], the user can use up to 30% of that for themselves – up to 1,500kWh per year.”

With Sharing Energy then selling surplus energy back to the grid, the payback time for PV systems could be about nine years, Iguchi said. Meanwhile the business case for batteries remains tied to enabling self-consumption and back-up. Sharing Energy is currently participating in a peer-to-peer (P2P) energy trading proof of concept (POC) trial which the company hopes will help change that.

The trial, which Sharing is conducting in partnership with Japanese listed energy retail company eRex and Australian energy trading and blockchain company Power Ledger, appears to show that a viable business case can be made for P2P trading in Japan.

After the expiration of the FiT, customers could sell electricity to the grid at a greatly reduced price, or, they could self-consume at home and sell the surplus to other customers registered in their network. Early FiT prices were as high as ¥48 or ¥42 per kWh, while electricity sales back to the grid after the FiT expires will be more likely around the ¥10 mark.

Under present Japanese energy laws, only retailers are allowed to sell electricity to consumers, while the bi-directional flow of electricity i.e. putting energy back to the grid as well as drawing from it, is prohibited.

“If the prosumer uses the P2P market, they might be able to sell surplus electricity at a higher price than the normal price. Rather than selling to the grid, they can sell it to another person, at a price closer to the retail price than the wholesale price,” Iguchi said.

“This is one of the main problems for battery providers in Japan, if energy from batteries can be sold to other consumers, the P2P business will be scalable.”

Kaz Iguchi believes that the law will change in two to three years. He said he often speaks with Ministry of Economy, Trade and Industry (METI) officials about this and related topics. They are open to being flexible with the energy laws he said, and comments from other sources including regional electric utilities imply that the change is coming.

“METI is very positive towards changing the rules for energy. I often talk to METI persons – they will adjust their rules to new business or technology,” Sharing Energy’s Kaz Iguchi said.

The reason for the change to be expected to take another couple of years, is that METI and other stakeholders in Japan require sufficient assurances from demonstrations and pilots, amassed data and so on, before they will sign off on rule changes.