The UK’s energy regulator has taken what appears to be an encouraging viewpoint on “double charging” of energy storage, clarifying the definition of the technology’s role in the grid, according to one expert view.

The regulator, Ofgem, has produced a consultation document related to the charges levied for the use of electricity networks. While the consultation considers a wide-ranging and often complex range of topics, Ray Arrell, a senior project manager at not-for-profit expert advisory group Regen SW, said that its look at “double charging” sounded a “positive note for energy storage providers”.

Clarifying the definition of energy storage and its role in the network is a proposition that while perhaps not as complex as other technical points covered in the consultation document, is certainly new as far as electricity transmission and distribution networks are concerned. It is something that networks around the world, including the US and Germany, are also dealing with.

Arrell explained in a recent LinkedIn post that at present, energy storage is charged twice for its use of the grid; firstly as a demand customer and secondly as a generator. In other words, Arrell said, “it (energy storage) is charged network costs both when drawing power from and discharging power back to the system”.

Resolving this issue could potentially remove what Arrell says energy storage industry figures have described as a penalty on energy storage, that storage assets “should not be considered as demand users”.

Changes proposed by Ofgem would only levy charges on energy storage as generation for the purpose of network residual charges (charges incurred that are intended to recover the cost of running the grid and distributing power), while also removing transmission and distribution residual demand charges for standalone energy storage or storage co-located with generation assets. On the other hand, energy storage co-located with demand, for instance behind-the-meter projects on the premises of large commercial and industrial users of energy, “would have to pay to charge up their storage systems under the existing demand residual tariff structure,” Arrell said.

However, he notes that currently the highest charges for using the grid are levied onto demand users at peak demand periods, when storage systems are likely to be discharging into the network. In other words these network charges are likely to remain relatively high, meaning cost savings from the removal of demand residual charges storage may be relatively small.

Regulator Ofgem’s consultation was published at the beginning of this month and closes on 5 May 2017. 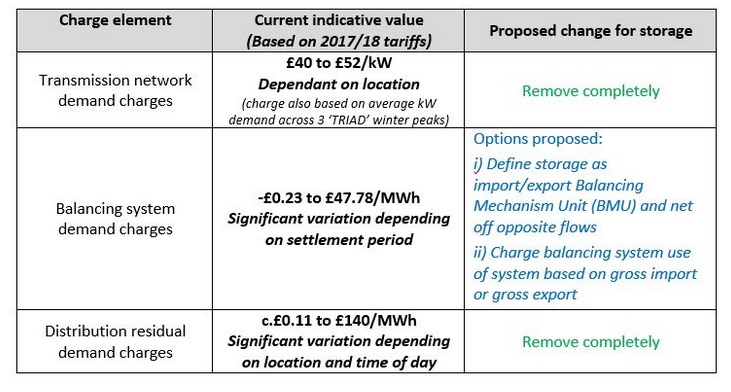