On-site energy storage is “the way that you make the subsidy free package work” for large scale solar according to the UK's climate change minister Claire Perry, who has pointed to Anesco’s Clay Hill solar farm, recently developed without subsidy, as proof of why the technology so longer needs financial support from tax payers.

Perry, who is Member of Parliament (MP) for Devizes, southwest England, was grilled earlier this week (28 November) by the business, energy and industrial strategy (BEIS) select committee where she also revealed she had never had an official meeting with prime minister Theresa May to discuss the climate change brief.

In a wide ranging session covering the recent COP23 summit in Bonn and the shortfall within the Clean Growth Strategy in meeting the UK’s legally binding carbon budgets, Perry was quizzed on the decision not to offer any new low carbon electricity levies until 2025 aside from the £557 million (US$750.13 million) already committed to contracts for difference (CfD) auctions.

“Given that I opened the country’s first subsidy-free solar farm a few months ago and we’re buying offshore wind at effectively subsidy free levels, it seems to me that committing £557 million to further subsidise renewables is a pretty decent commitment,” she said.

“What I think is absolutely right to say is that as costs fall so should the level of subsidies and of course we want to be always looking for new and innovative renewable technology but as we are getting to a subsidy free world for mainstream renewable technology, I have to say with my fiduciary responsibility to taxpayers money it seems to be entirely consistent to stick to the £557 million commitment.”

Perry – flanked by Pete Betts, director for international climate and energy at BEIS, and Tim Lord, director for clean growth – was then asked by committee member Rachel Maclean whether or not established technologies like onshore wind and solar would be allowed to compete “on a level playing field” within the contracts for difference auctions planned before 2025.

Lord replied by saying that no decision had been made on future auctions for established technologies but that the advent of subsidy free solar in the UK meant the technology had reached a point where it could stand on its own.

“The UK energy bill payer has made a major investment in solar and we’re starting to see that deploying without support. I think that’s a trend that we’d welcome and I think it demonstrates that the strategy that the government has followed over recent years has been effective in driving down the cost of some of those technologies and enabling them to deploy without subsidy, which ultimately needs to be the objective for all of them,” he said. 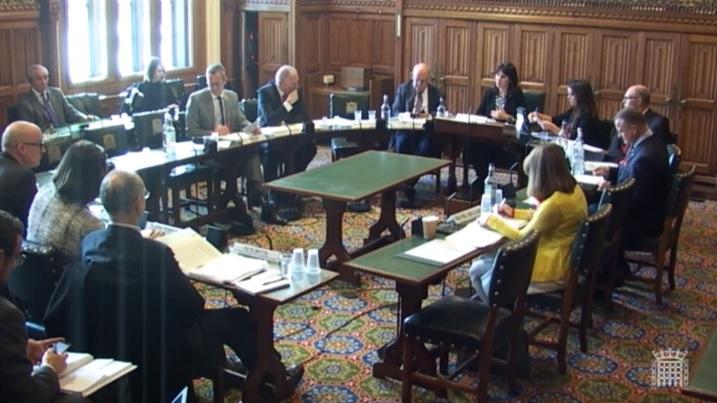 Perry was grilled by the Department of Business, Energy & Industrial Strategy (BEIS) select committee for around two hours this week.

Storage is ‘how you make the subsidy free package work’

Perry followed up by saying that work was now underway to clear a path for co-located energy storage facilities with solar, as this combination is thought to be key to bringing forward similar projects to the first subsidy free solar farm at Clay Hill.

“The thing to solve with solar is the on-site storage because [at] the Clay Hill solar farm, which is subsidy free, that is the way that you make the subsidy free package work. So we’re working with the regulator to make sure all of the various impediments [are] removed because we are keen to bring forward more solar,” she said.

But speaking to our UK sister site Solar Power Portal earlier this month, Anesco chairman Steve Shine scrutinised the government's use of the Clay Hill development as evidence of subsidy-free solar being acheiveable in the UK. “You can't build solar by itself subsidy-free,” he said, pointing towards the battery storage element of the site and significant supply chain engineering that led to the project at what Shine described as “bottomed-out prices”.

It is not the first time government ministers have looked to use single site developments as evidence for wider trends within the solar industry. Last year then-energy minister Andrea Leadsom was the subject of a strongly-worded letter from Nick Boyle, chief of major UK developer Lightsource after she used his comments regarding private wire solar projects as evidence that the technology no longer needed subsidy support to deploy.

As well as issues around double charging of levies on storage units as mentioned by Perry in her response, Ofgem is also working on ensuring solar farm owners can retain their accreditation to subsidy schemes when adding storage in the way that Anesco have already done.

A guidance document was due out this month however Ofgem’s head of renewables Luke Hargreaves revealed that the absence of energy storage from the RO and FiT legislation had caused some delays owing to this lack of clarity around the technology.

A spokesperson for Ofgem recently told Solar Power Portal the guidance was still intended to be released before Christmas.