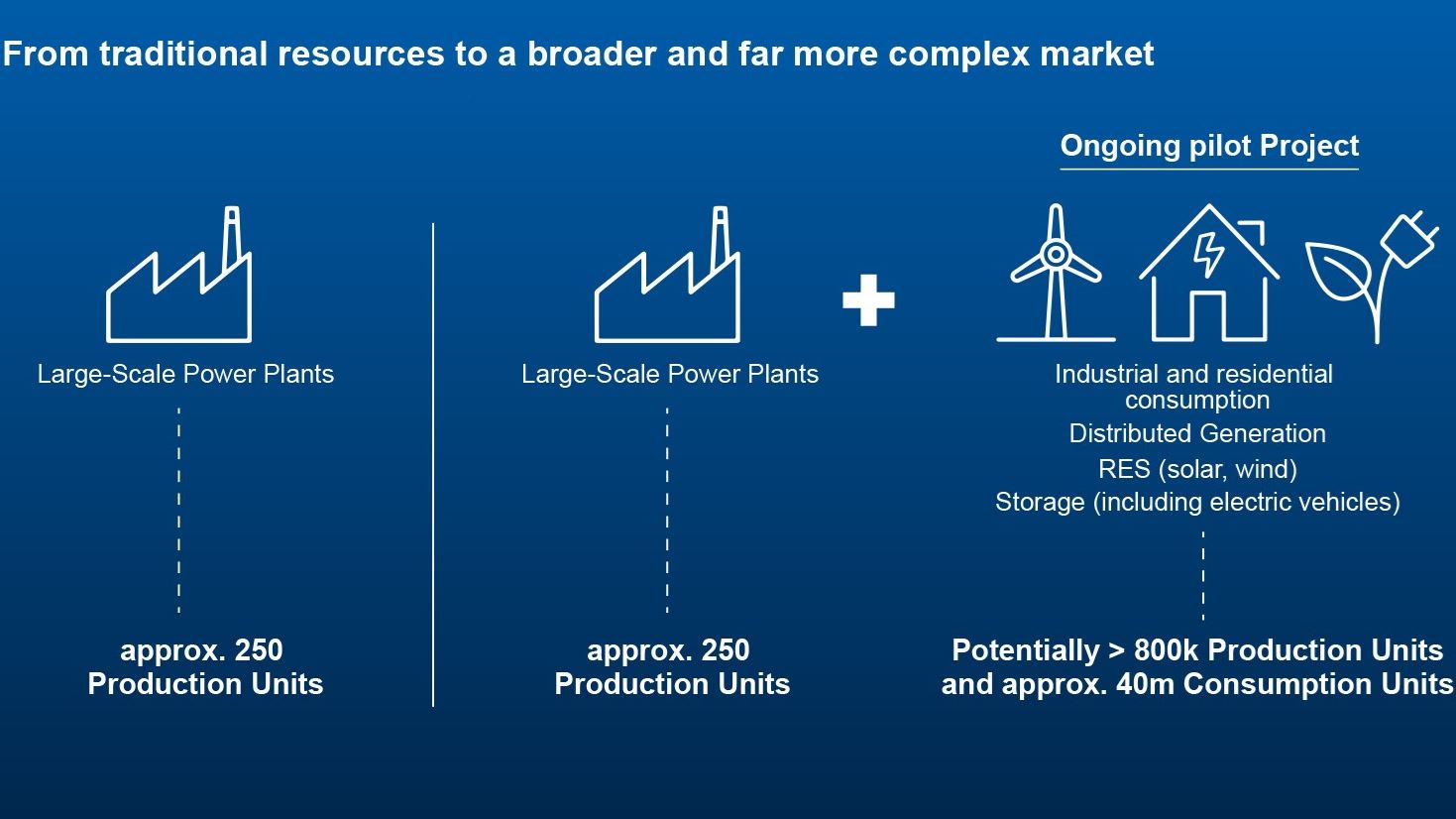 Terna’s view of the evolution of the electricity sector in Italy. Image: Terna.

As part of Terna’s drive to overhaul and evolve the nation’s electricity system through its Grid Development Plan, 40GW of new renewable energy systems capacity is being sought by 2030, for renewables to achieve a policy target of being more than half of gross electricity consumption (55.4% to be precise) by that year.

This corresponds to around 12GW of new renewables capacity by 2025, over 1GW of demand response, just over 5.4GW of new gas capacity – and more than 3GW of new energy storage capacity. Italy also wants to completely phase out coal by 2025.

So far, this energy storage uptake has been concentrated for the most part into a Terna pilot programme, called UVAM, launched in November 2018. Short for Virtually Aggregated Mixed Units, the programme allows resources of as small as 1MW to participate in balancing the grid’s demand and supply. This 1MW threshold is thought to be considerably lower than the capacities required for similar grid-balancing opportunities in France or the Netherlands.

According to a Terna factsheet, by June 2019, more than 120 UVAM, totalling more than 830MW capacity were qualified to provide ancillary services, with the vast majority (83%) holding capacity contracts that guarantee availability to the grid operator when needed. Terna targeted the deployment of 1000MW of resources in the UVAM pilot during 2019. Resources are allocated in A region (northern and central Italy) and B region (the south).

Terna representatives confirmed to Energy-Storage.news that the contract awards are ongoing and offered recent examples from November and December 2019, showing that in December, Enel X, the renewable and new energy arm of Italy-headquartered utility Enel was awarded two separate 20.3MW (Region A) and 4.8MW (Region B) contracts under the UVAM project. This was from a total of 91.4MW of contracts agreed across the two regions, with Region A getting 75.2MW, priced at €29.0069 per MW annually and Region B contracts (16.2MW) priced slightly higher at €29.469 per MW.

In November, Enel X was also awarded two separate contracts, one for 14MW (Region A) and another at 3.8MW (Region B). This was from a total 58.1MW of Region A contracts awarded, at €28.4601 per MW annually, and 10.5MW of Region B contracts priced at €29.5133 per MW annually. Terna representatives said that further awards and announcements can be followed here, while a request for comment sent to Enel X had not been replied to at the time of publication.

According to Terna, the UVAM pilot’s success in procuring aggregated capacity to deliver a number of ancillary services including grid-balancing, congestion resolution and tertiary reserve at present means the transmission system operator (TSO) is seeking to expand the scope of procurement to other services, which Terna said could include secondary frequency response or power regulation. The TSO also seeks to pull in the involvement of domestic assets and “progressively involve consumers”.

“Enabling flexible resources and their use by TSOs to meet their requirement for services will progressively assume a structural role on a global level,” Terna’s website says.

“In general, Terna is firmly committed to proceeding with the testing of new, flexible resources due to the important role that it plays in the context of energy transition. On the one hand, the experience acquired through these projects allows the manager of the Italian national transmission grid to develop (along with the authority) a proposal for the complete redesign of the services market. On the other hand, it creates incentive for operators within and outside the electricity sector to research innovative supply solutions.”

[Terna website: ‘Five things you need to know about UVAM’]

Indeed, the TSO is now seeking to pilot the procurement of ultra-fast frequency regulation services. It has organised a seminar event at its own Terna Auditorium, Rome, on 13 January 2020, where it will present for consultation various documents that have been prepared. Attendees must register no more than two representatives per company by 10 January 2020.