The traditional automotive industry had been reluctant to embrace the electricity revolution. But Porsche’s recent announcement that it would be doubling its investment in electric vehicles (EVs) to €6 billion (US$7.4 billion) by 2022 can be seen as a wakeup call. The battery vehicles are coming.

And Porsche is not the only one. Other automotive companies are on the same path and investment in EVs from the EU and US automotive industries totals about €90 billion in the next five years. There is no time left to hide.

In short, energy storage technology is set to revolutionise our society, EVs and beyond, with power companies among the most affected – whether they like it or not. The sector needs to wake up to this and decide what it is going to do about it. Education could provide the wake-up call that power professionals need.

When creating the right circumstances for a new technological solution to thrive, three key factors rank above all.

First, the technology itself needs to work, and work well. Storage scores well on this count, with batteries such as Tesla’s Powerwall capable of storing up to 13.5kWh of electricity – enough to sustain the average household for a full day before needing to draw power from the grid or generate its own renewable energy.

Second, the cost needs to come down to a level at which the solution represents better value than those that are already available. And though batteries for households and power plants remain more expensive than for vehicles, investment in storage on the grid would actually save money on the whole very quickly.

For instance, by adding just one kilowatt-hour of storage capacity to every home, we could reduce demand at peak times by up to 40%. That represents a massive saving on not only generation infrastructure but also on investment in the stronger transmission and distribution lines needed to handle higher loads of power. New business models and regulatory modifications can be developed to take full advantage of the savings.

And third, a range of stakeholders must work together to cultivate a regulatory landscape that supports innovation, rather than slowing it down. Here, the European Union is committed to driving progress.

In a recent speech, the EU’s vice president for Energy Union, Maroš Šefčovič, outlined the continent’s ambitions to build up its battery industry along the entire value chain – and quickly. This includes working through the European Batteries Alliance, backed by the European Commission and Investment Bank with the support of InnoEnergy, which exists to provide a framework around which the sector can grow.

So it is clear that the storage solutions are coming, and that they will be here to stay – with or without the involvement of power providers. But will utilities adapt to a new role, or try to hold on to their old monopolies?

Utilities have become accustomed to a simple role: generating and distributing power to consumers. And they have built up huge monopolies in support of that purpose, with very few major players controlling much of the market.

But batteries have changed the game, and old players need to learn new rules.

They have done this in production already. When investment in wind started, it was not kicked off by the power companies. Small start-ups led the way, followed by the occasional larger business from outside the sector.

The power companies soon realised that they had to compete in a very different landscape. And they did so by applying their advantages in an innovative way. They had both the resources and experience required to set up and operate large wind farms – after all, the skills are little different to those they had been using to run large-scale fossil fuel and nuclear power plants. These larger installations were able to take advantage of huge economies of scale and were very competitive.

This approach put the power companies back in business. And there is no reason that they cannot repeat that feat on the grid. By applying economies of scale, they could provide storage not only to individual households and businesses, but to entire communities – perhaps even sections of cities or entire regions.

In many cases, the best applications of storage will be wholescale deployment. Who better to provide it than the experts? 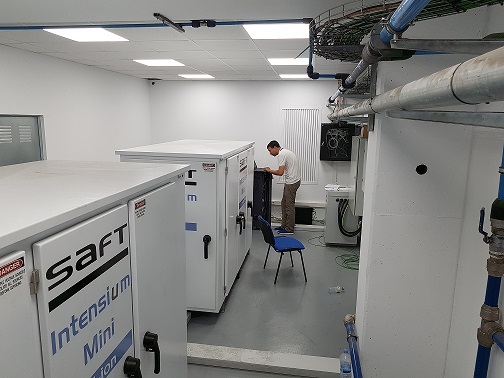 Of course, there are a number of ways for power companies to compete. For instance, some are choosing to support small-scale local generation. But others are yet to make a move. The reason? A lack of understanding of the changing dynamics caused by storage.

Some are unsure what approach to take and how to go about it. And there are those who still doubt the inevitability of energy storage in their region. For instance, there are some in Sweden who say that batteries are not enough to sustain people during the long, dark winters when they are using the most power. They say that the lack of wind and sun means that renewable generation will never be able to replace fossil fuels.

These people underestimate the power of storage. Peak demand in Sweden only lasts for a few hours, and storage could play a critical role in bringing that down to a more manageable level that requires the burning of far fewer resources.

And there are lessons to be learned from overseas. Those who still believe storage to be too expensive need only look to Australia, which has a very competitive battery market, driven by the entrance of new players and the subsequent adaptation by existing power companies. Their European counterparts could do worse than look at how they adapted and apply what they learn to their own businesses before other players get too much of a head-start.

This is why The Institute of Sustainable Energy by InnoEnergy has developed a new course on battery storage. The online programme is designed to provide participants with in-depth knowledge of the exciting potential of battery storage solutions, and their applications and benefits across various areas of the electricity grid.

This includes a thorough understanding of practical applications of the technology, including electric vehicles, energy storage on-grid and at home, industrial products and local energy systems. The course will also examine new business models and investment opportunities related to innovation in energy storage – learning both from the past and from similar developments overseas.

Ultimately, the aim is to help power professionals and others (including energy engineers, automotive professionals, policymakers and academics) accept the inevitability of storage solutions and learn how to adapt to the changing dynamics they bring.

The batteries are coming. And power companies face a choice between trying to hold the old world together or adapting and joining the new one.