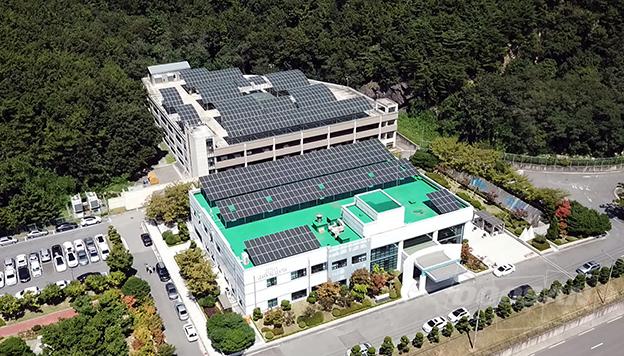 South Korean industrial group Doosan Heavy Industries & Construction has self-executed a solar-plus-storage project at its head offices in Changwon, using this and other projects on its own premises as a learning curve for external projects.

Doosan Heavy is involved in a diverse range of industries, providing services from the manufacture of gas, nuclear and other conventional generation plants to water desalination and treatment plants, iron and steel casting and forging for ships, construction and architecture and a number of other areas.

The company is known in the energy storage industry for its management and control software subsidiary, Doosan GridTech, which was originally a US company known as 1Energy Systems and acquired by Doosan Heavy in 2016.

Doosan GridTech supplied advanced control system software to the newly completed Changwon HQ project, which is a 300kW rooftop solar PV plant, coupled with 1MWh of battery energy storage. The energy storage will smooth the variable output of the solar and help the offices cope with times of peak electricity demand.

Keeping it all within the Doosan umbrella, Doosan Heavy carried out engineering, procurement and construction (EPC) duties for both the PV and the storage systems, designing, installing and commissioning the facility and taking in responsibility for future operations and maintenance (O&M) duties.

Doosan Heavy said that rather than being used for onsite self-consumption of PV power, generated energy will be sold to KEPCO (Korea Electric Power Corporation), after Doosan Heavy obtained the necessary Renewable Energy Certificate (REC) which enables trading of generated power in energy markets.

According to Doosan Heavy’s head of corporate strategy, Yongjin Song, the company is now looking to execute solar-plus-storage projects at five of the group’s other facilities around South Korea. The company is also developing a 100kW PV + 4.2MWh energy storage microgrid for another Doosan subsidiary, Doosan Engine.

“Going forward, Doosan seeks to become the frontrunner in the delivery of optimized products and maintenance services for hybrid plants by capitalizing on the experience and know-how gained from operating these systems,” Song said.

Outside South Korea, subsidiary Doosan GridTech has been involved with a number of large-scale projects in the US, including systems for Texas utility Austin Energy and has signed an agreement to construct a 20MW lithium-ion battery energy storage system (BESS) for the Los Angeles Department of Water and Power (LADWP).