‘Digital inertia’: Energy storage can stabilise grid with 1/10 the capacity of thermal generation

On islanded (or isolated) grids with growing renewable penetrations, grid operators often struggle to maintain system stability. Operators in places as diverse as Ireland, Puerto Rico and Australia frequently rely on inertial response from thermal power plants like coal or gas-fired generators to balance sudden mismatches between supply and demand. However, recent research from Northern Ireland’s Queens University Belfast (QUB) finds that battery-based energy storage can provide inertial response for system reliability much more efficiently, at a lower cost and with substantially reduced emissions than a much larger quantity of thermal generation.

QUB’s research found that just 360 megawatts (MW) of battery-based energy storage could provide the equivalent stabilisation to Ireland’s All-Island electricity system as would normally be provided by 3,000MW of conventional thermal generation. That shift to batteries could save up to €19 million (US$22.5 million) annually and could achieve approximately 1.4 million tonnes of annual CO2 savings. 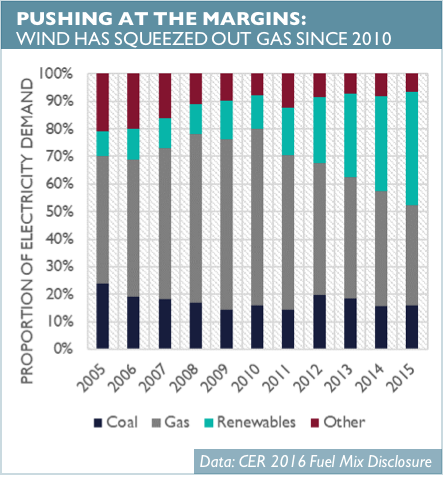 Inertia is a system-wide service that responds to fluctuations in electricity frequency in the first fraction of a second of an imbalance between supply and demand – for example, when a power station suddenly drops offline. Traditionally, this stabilising hand has come from the kinetic energy provided by the spinning mass of (synchronous) generators that produce electricity from fossil fuels.

All this occurs well within the first half a second of an issue – literally, the time it takes a human eye to blink. Traditionally the electric power sector has not thought of it as service. It’s just part of the physics of synchronous generators; and we don’t miss something until it’s gone.

As the proportion of energy from (non-synchronous) wind and solar grows this source of traditional ‘analogue’ inertia is in increasingly short supply. The typical solution to this has been to hold back wind and solar output during such times, but this is growing increasingly costly as renewable penetration grows. Let’s face facts: paying not to use zero-fuel cost and zero carbon renewables isn’t a tenable solution in the long run; and would require a significant overbuild of renewable capacity to achieve the same decarbonisation targets.

Energy needed during curtailment is often provided by fossil fuel-powered thermal generators, running when they don’t need to be or running at a higher set point than they need to be, wasting fuel and adding cost.

However, an alternative solution is close at hand. Energy consulting firm Everoze recently released a recent report ‘Batteries: Beyond The Spin’, based on the QUB research.

By modelling the energy storage array’s impact at scale, the QUB team found that the array’s response time – approaching 0.1s – provided the same effective stabilisation as analogue inertia.  This speed of response, an order of magnitude faster than even the UK Enhanced Frequency Response service tendered last year by National Grid would allow just 360MW of fast responding batteries to provide the equivalent stabilisation to Ireland’s All-Island electricity system as would normally be provided by 3,000MW of conventional thermal generation.

By removing the technology bias to ‘Analogue Inertia’, and letting batteries provide an equivalent ‘Digital Inertia’ service the report outlines how Ireland’s electricity system could save up to €19 million ($22.5 million USD) annually, the result of allowing thermal generators to operate more efficiently, reliably and with reduced maintenance needs.

In addition to savings to consumers, analysis by Everoze showed clear environmental benefits of a move towards battery-based energy storage. Ireland could achieve annual CO2 savings of approximately 1.4 million tonnes as a result of adopting ‘Digital Inertia’. Those savings are equivalent to cutting the emissions from an entire city the size of Cork (population ~208,000) in Ireland — or Salt Lake City, Utah in the United States, Bordeaux, France, or Nogales, Mexico.

The key to achieving those cost and carbon reductions and gains in stability lies in removing regulatory barriers that prevent batteries from providing those services. Both the language and structure of managing inertial response are today framed around incumbent technology.  This lack of technology neutrality is a barrier to innovative solutions.

Opportunity for digital inertia as renewables scale up

Unsurprisingly, islanded grids facing growing penetrations of renewables will be the first to address these questions at scale.  While it may take time, larger interconnected grids approaching significant renewable penetration will learn from the experiences of smaller grids such as Ireland.

The Island of Ireland is a world leader in clean electricity, thanks to a progressive grid policy by Ireland's state-owned transmission system operator EirGrid and Northern Irish equivalent SONI.  To date, analogue inertia has served the power system well – managing the rate of change of frequency in the blink of an eye to keep the system stable at all times.

QUB’s research should now compel us to re-evaluate our options, prompting a fundamental re-evaluation of how we balance supply and demand on a sub-second basis. We, the team at Fluence, together with Everoze and QUB, believe it’s time to go ‘beyond the spin’ and unlock the cost-saving, efficiency-boosting and carbon-cutting power of batteries.