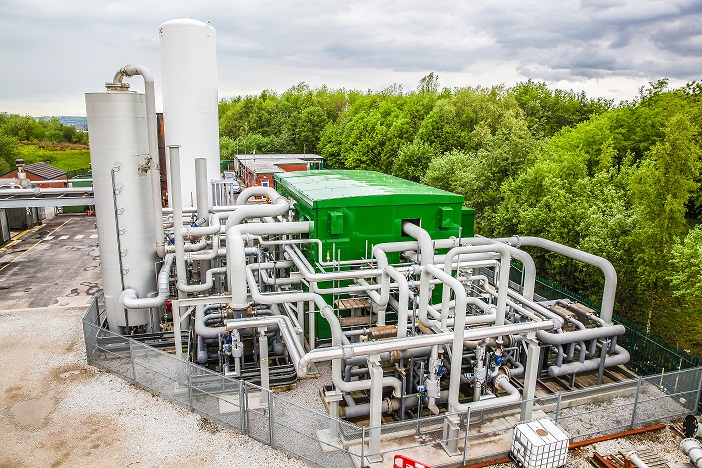 Liquid air energy storage (LAES), so far only deployed at scale at two sites in England, will be available in a number of new territories after manufacturer Highview Power signed a deal claimed to be worth €1 billion (US$1.12 billion).

Highview Power, headquartered in the UK, said earlier this month that it has signed a deal with an engineering, procurement and construction (EPC) partner, TSK, for marketing the LAES systems into Spain, the Middle East and South Africa.

Teasing the possibility of days and weeks of storage from ‘giga-hour scale’ facilities, making possible the kind of long-term storage not possible or economically viable with lithium-ion or even flow batteries, the JV is targeting the replacement of thermal power plants and even nuclear. Highview Power has so far built one 2.5MWh demonstrator and a further 15MWh project in northern England.

TSK has executed projects across numerous sectors, including a 103.19MW PV plant in Jordan, as well as large projects in oil and gas and for industrial infrastructure such as ports. Headquartered in Spain with a turnover of €1 billion in 2018, the company has been active in the Middle East since 2010.

“After looking at a number of storage technologies, we have come to the conclusion that Highview’s cryogenic energy storage is the ideal solution to deliver long-duration, large-scale storage services to our customers. The technology is not only cost effective, it is scalable, clean, has a long lifespan and can be deployed now,” TSK’s CEO Joaquín García Rico said, adding that the JV has set the target of €1 billion in sales by 2021.

In a paper published this quarter in our journal PV Tech POWER, Highview Power’s CEO Javier Cavada argued the case for the technology as a means to creating reliable baseload power that could enable networks and nations to go for 100% renewable energy.

“Lithium-ion batteries have been used for stationary energy storage applications, due to their high energy density and relatively low upfront cost. However, the longer the discharge period for a given capacity, the more batteries you need. At the hundreds of megawatts scale, the economics for two or more hours of discharge is a challenge,” Cavada writes.

“The technology uses liquid air as the storage medium by cooling ambient air (using conventional industrial refrigeration) to lower than -270°F (-170 ̊C), which results in a 700-fold contraction in its volume from gas to liquid. The process is similar to that used to liquefy natural gas, but because these cryogenic systems use only air, the entire charge/discharge cycle is completely free of carbon emissions. The liquid air is stored in conventional insulated tanks at low pressure (such as those used for liquid oxygen or nitrogen storage at facilities such as hospitals). When energy is needed, the liquid is warmed and pumped to pressure, then expanded back to gas with a 700-fold increase in volume. The expansion takes place through a standard expansion turbine connected to a generator to generate electricity, thus releasing the stored energy…

“These cryogenic systems are the only long-duration energy storage solution available today that offer multiple gigawatt hours of storage. That represents weeks’ worth of storage, not just hours or days.”