A public consultation period has opened on plans for a vast renewable energy project including large-scale battery storage which would be used to power mining operations for Australian metals company Fortescue.

Fortescue Metals Group has submitted its Uaroo Renewable Energy Hub proposal to the Environmental Protection Authority of Western Australia, with the public consultation period now open for a week until 15 February.

According to documents hosted on the Authority’s site, the project, in the mineral rich Pilbara region of Western Australia, would consist of up to 340 wind turbines and a solar farm, which between them would have a maximum energy generating capacity of 5.4GW.

Repurposing land used mostly for cattle grazing, the site proposal also includes substations and other infrastructure and hosting up to 9,100MWh of battery storage, which would comfortably make it the largest battery project in the world.

The world’s largest battery storage project to date is the 1,600MWh Moss Landing Energy Storage Facility in California, although recent plans were announced to take that up to 3GWh.

The Pilbara Uaroo Renewable Energy Hub would take up to seven years to construct and have a maximum project life of 42 years, although infrastructure would be maintained and then replaced approximately every 30 years as assets reached their end of life.

The application has been made by Fortescue’s subsidiary Fortescue Future Industries (FFI) and its energy asset arm Pilbara Energy. FFI aims to drive the group’s transformation into a powerhouse of the energy transition economy, with its other activities including a heavy emphasis on promoting green hydrogen, of which Fortescue founder and chairman Dr Andrew Forrest is an enthusiastic supporter.

Mining operations, which are often remote and not connected to national or regional grid infrastructure, can benefit both economically and environmentally from onsite or nearby renewable generation backed with energy storage, due to their otherwise being dependent on expensively transported fossil fuels and their attendant, maintenance-heavy generation equipment.

Numerous recent projects have been reported on from this sector, including the recent completion of BHP’s first off-grid renewables projects, with solar PV and battery storage, also in Western Australia. The vast majority however, pertain to reducing site emissions and increasing penetration of renewables, rather than completely powering operations with solar and wind, as appears to be the case with the latest Fortescue project proposal. 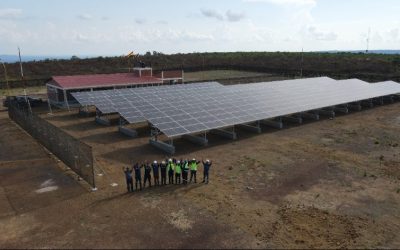