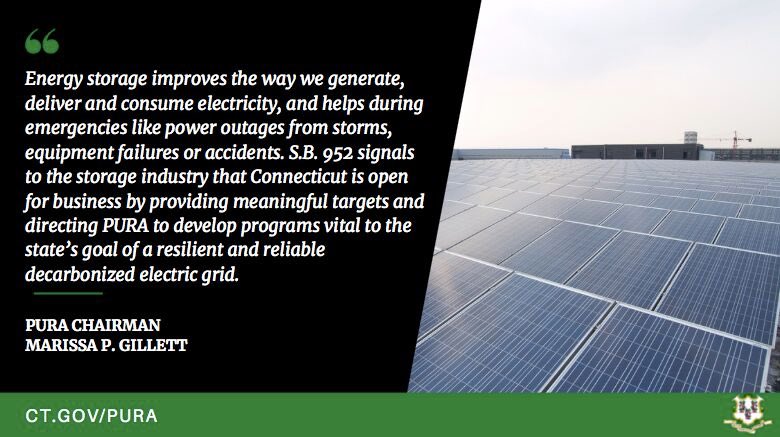 Public Utilities Regulatory Authority (PURA) Chair Marissa Gillett has been supportive of the role of energy storage in a cleaner, resilient electricity system for her state. Image: PURA via Twitter.

Connecticut’s House of Representatives has signed off on a bill proposing a 1,000MW deployment target for energy storage by the end of 2030.

The lower house of the state’s lawmakers voted last week on 4 June on Senate Bill (SB) 952, ‘An act concerning energy storage,’ with all 143 Representatives present voting unanimously in favour, while eight were absent and did not vote.

After the upper house, the Senate, voted to pass the legislation on 20 May, the bill is now effectively enacted and awaits the signature of Connecticut Governor Ned Lamont. The national Energy Storage Association (ESA), which previously testified in support of the bill, said that Lamont is expected to sign the bill before the end of this month, with ESA interim CEO Jason Burwen applauding representatives for enacting the legislation.

ESA also noted that two interim targets of 300MW by the end of 2024 and 650MW by the end of 2027 are in line with recommendations the trade association has made; in particular the 2024 target represents around 4% of the state’s summer peak load. ESA has said that a level of between 3% and 7% of state peak electrical load within two to three years of setting a target can be an appropriate initial benchmark level for storage, giving stakeholders a chance of “learning by doing”.

ESA’s Jason Burwen said that the legislation “will accelerate storage deployments that meet the state’s twin goals of decarbonisation and resilience while growing a local storage industry and new jobs”.

“SB 952 is particularly important for creating a long-term demand signal and statutory foundation to sustain the important efforts that Governor Lamont and Public Utilities Regulatory Authority (PURA) Chair Gillett have initiated to drive storage deployment forward. We salute the leadership of Rep. David Arconti and commend his colleagues for enacting this important legislation in support of Connecticut’s clean energy transition.”

Once the target is established, PURA and the Connecticut Department of Energy and Environmental Protection (DEEP) are required to report annually on progress towards the goal. Individually, PURA is then required to establish programmes to incentivise and deploy energy storage on the electric distribution system, based partly on a straw proposal the Authority previously made for 580MW of customer-sited storage; meanwhile DEEP is authorised to issue requests for proposals (RFPs) for energy storage projects — either standalone or paired with generation — to pursue to required goals.

Connecticut will therefore be the eighth US state with an energy storage deployment target or mandate, following Virginia’s 3.1GW target set last year through its Clean Economy Act. ESA interim CEO Jason Burwen — then the group’s policy director — spoke to Energy-Storage.news about the seven states and their targets for an interview a while back.