A project demonstrating the integration of energy storage onto grid networks in Hubei, China, will see the first phase of a 10MW / 40MWh project built by Pu Neng, a vanadium flow battery manufacturer.

The first phase of the Hubei Zaoyang Storage Integration Demonstration Project will be a 3MW / 12MWh vanadium redox flow battery (VRB) in Zaoyang, Hubei Province. The battery storage system will be used to assist the integration of power from large-scale photovoltaics (PV) locally.

While the project sounds fairly significantly sized compared to other flow battery systems around the world, according to Pu Neng, the 40MWh project itself is going to soon be superseded in size in Hubei by a mammoth 100MW / 500MWh energy storage system that is expected to “be the cornerstone of a new smart energy grid” in the province, where it will fulfil the role of a peaking power plant, stabilising the local network.

Pu Neng signed a deal to develop the first phase of that project with Hubei Pingfan Vanadium Energy Storage Technology Company, a subsidiary of Hubei Pingfan, a mining and industrial metals and minerals company which is growing its interest in vanadium for energy storage. Pingfan apparently has more than one million tonnes of vanadium at one of its own reserves.

Perhaps more significantly, Hubei Pingfan was listed in the Chinese government’s 12th five-year plan of national strategy, issued in 2011, as a national pilot enterprise for vanadium. For the Hubei Zaoyang project, Pu Neng and Pingfan will develop vanadium electrolytes from local sources, which the project partners said will also help establish supply chains for the metal for future projects. The first phase of the project begins this month, for completion early next year.

The NDRC has actually called for several vast flow battery systems, of over 100MW per system, to be deployed as trials and demonstrators. In fact, a 200MW / 800MWh vanadium energy storage project is being built already in Dalian, a city in the southern province of Liaoning, by Chinese system manufacturer Rongke Power and UniEnergy Technologies (UET).

Pu Neng chairman Robert Friedland described vanadium as a “miracle metal” which could “fundamentally transform” China’s power grid, adding that the country has the world’s “largest and highest-grade” vanadium resources.

“With massive amounts of renewable energy and storage coming online, China will create the most modern, clean and efficient grid in the world. Earlier this year, Chairman Xie and I discussed the opportunity to utilize Hubei's abundant vanadium resources and Pu Neng's next generation technology to set a new benchmark for the global energy storage industry. This is just the first step of what will be many projects working together,” Friedland said.

According to Robert Friedland, NDRC’s policy statement, which calls for demonstrators to be built by 2020, “will result in vanadium flow batteries revolutionizing modern electricity grids in the way that lithium-ion batteries are enabling the global transition to electric vehicles.”

Flow batteries are often used in circumstances where their scalability and ability to hold longer durations of energy storage for aggressive cycling perform more favourably than cheaper lithium-ion batteries, which tend to perform better in high-power, short duration applications. 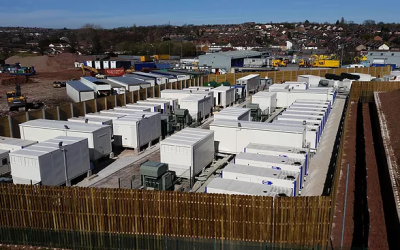