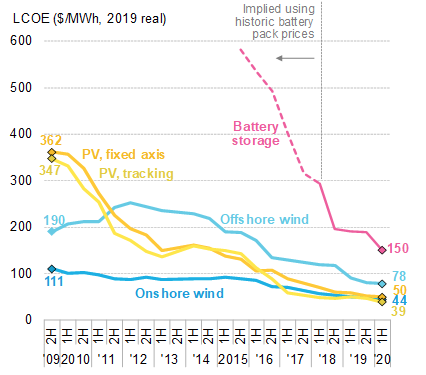 The levelised cost of electricity (LCOE) that can be achieved today for battery energy storage means that “new-build batteries can be competitive on cost with gas peaker plants,” according to BloombergNEF.

Our sister site PV Tech reported yesterday that according to analysis BloombergNEF’s newly-published LCOE reports, solar’s levelised cost of electricity has fallen below US$30/MWh with the PV industry expected to break the US$20/MWh average in a decade.

New-build utility-scale solar and onshore wind are the cheapest options in much of the world, putting existing coal and gas power plants at risk, with BloombergNEF assessing 25 different technologies and 7,000 projects in 47 countries.

The LCOE of battery storage systems meanwhile has halved in just two years, to a benchmark of US$150 per MWh for four-hour duration projects. In an interview, BloombergNEF analyst Tifenn Brandily, the report’s lead author, told Energy-Storage.news that below two-hours duration, batteries are already cheaper for peak shaving than open cycle gas turbines (OCGT), traditionally the go-to technology for that purpose.

“If you need to shave a peak in the load, it’s going to cost less to install a battery than OCGT or gas reciprocating power plants, peaking plants,” Brandily said.

‘Tremendous’ reductions driven by both upstream and downstream market dynamics

BloombergNEF has only been tracking the battery storage space for the past couple of years as the market went from being “relatively limited,” the analyst said, but “since then we’re really seeing a trend now – the LCOE has come down quite tremendously, actually faster than PV or wind”.

While the report said that manufacturing scale and standardisation, as well as technology improvements on the upstream side have contributed to this rapid decline in costs, the other big piece of the puzzle is on the downstream end – battery projects are getting bigger and bigger, both in megawatt (MW) and in megawatt-hour (MWh) metrics.

Projects in 2015 had about 1.5 hours’ duration of storage on average, “recently financed” projects reached about 1.8 hours, whereas projects going ahead in 2020 are estimated to reach about 2.2 hours’ duration on average. In terms of the power output in megawatts, the average project in 2015 was about 2.9MW, “relatively small utility-scale batteries,” whereas in 2020, the average is more like 21MW.

“That’s really significant because you can play on both power outputs and storage duration to reduce the cost per MWh of storage,” Tiffen Brandily said.

“So, beyond the technologies and the chemistries getting better and more energy dense, beyond the manufacturing scale-up also, which will also reduce costs because of standardisation, producing things in batch [volumes], you also have an effect which is much more in the downstream of the industry – developers are looking to scale up those power output and storage durations as a way to reduce the levelised cost of discharge, or the levelised cost of electricity”.

The news comes with a caveat that longer duration energy storage does not yet experience the same market demand pull for cost reduction, as the cost of batteries, typically lithium-ion, increases rapidly with the discharge duration. Meaning that for shaving the peak for 3-5 hours during the day, it’s still cheaper to buy a OCGT plant and fuel.

“Batteries are limited in terms of their discharge duration is the limit to how much you can monetise, with a peaking plant you can go beyond 4-6 hours and keep supplying that to meet demand. So there’s definite limitations,” BloombergNEF’s Tiffen Brandily said.

However, that too, appears to only be a matter of time. While for really long durations of storage, there does not yet appear to be a competitive technology solution that has emerged in the market to beat gas turbines over 10-12 hour durations, batteries will continue to eat away at longer and longer duration segments.

“For short term balancing it’s already cheaper to install new-build battery storage than peaking plants and as we go to 2025, we’re seeing that that extends until probably around four or five hours of discharge, that’s pretty significant. Peaking plants never generate more than 15% or 20% of the time so that means batteries on a new-build basis will be competitive on that segment.

“In the long run, we expect battery storage to become the cheapest source of new flexible power up to four hours of discharge, even in the U.S. where gas is cheap. To achieve that, zero marginal cost generators like wind and solar will help.”

EDITOR'S NOTE: This article has been amended from its original form – some quotes were provided as background, or were misinterpreted by the author and have been amended at Tifenn Brandily from BloombergNEF's request. In particular, the original discussion of subsidies is not relevant to cost-competitiveness on a technology or deployment volume basis as assessed by the BNEF team, while it should be noted that open cycle gas turbines (OCGT) commonly provide peaking power, combined cycle gas turbines (CCGT) as originally stated, provide baseload energy. Perhaps worst of all, we spelled Tiffenn's name wrong! Apologies.