With the release of the register of projects to have pre-qualified for the UK's upcoming Capacity Market auctions, the UK’s utility-scale battery storage pipeline has now reached nearly 8GW. Over the last few months we have seen a sharp rise in the number of planning applications with over 1.3GW of battery storage projects being submitted since the beginning of September 2017 alone.

Based on the trend of applications throughout the year it was clear that the capacity market register was going to include a lot of battery storage but the number and capacity of projects will have surprised most people.

The applications include a wide range of project sizes and with the Capacity Market making up just one part of a project revenue it opens the auction up to those with different business models. This could include smaller projects located behind the meter and larger projects either co-located with a generator or stand-alone, seeking to use the Capacity Market income as secure additional revenue in addition to the primary income, which could include ancillary services or arbitrage.

However, even with the clear interest in energy storage shown by the participation in the Capacity Market, there remain big question marks about how much of it will compete in the upcoming auctions once the deadline for planning applications passes and the changes to de-rating force some developers to withdraw projects. Research from the Solar Media market research team shows there could be up to 2GW of prequalified projects that have not yet submitted planning applications. There is also the possibility that some of the projects that were rejected will successfully appeal and be able to compete.

It has not proven simple to calculate exactly how much battery storage is participating in the Capacity Market. Anyone who has had a look through the results will see duplicates and multiple applications on some sites, which seems to be a strategy used by some developers and there will be different reasons behind this. In some cases we can see the total capacity of a site in the planning documents split into multiple projects in the Capacity Market. The battery duration is not included in the data released by National Grid and it is likely that this accounts for some of the duplicates, as companies will have different strategies to react to the de-rating changes which were unclear at the time of application.

The graphic below shows that there are around 500MW of projects at the “ready to build” stage, it is likely that the majority of these will be built next year and the number could be even higher based on the results of the T-1 auction, which require projects to be delivered in 2018/19. The projects from the Capacity Market register mainly fall into the “in planning” and “proposed” categories. If the developers of these projects decide to compete in the auction these projects are likely to be the ones with a chance of success in the T-1 or T-4, which demands delivery in 2021/22. 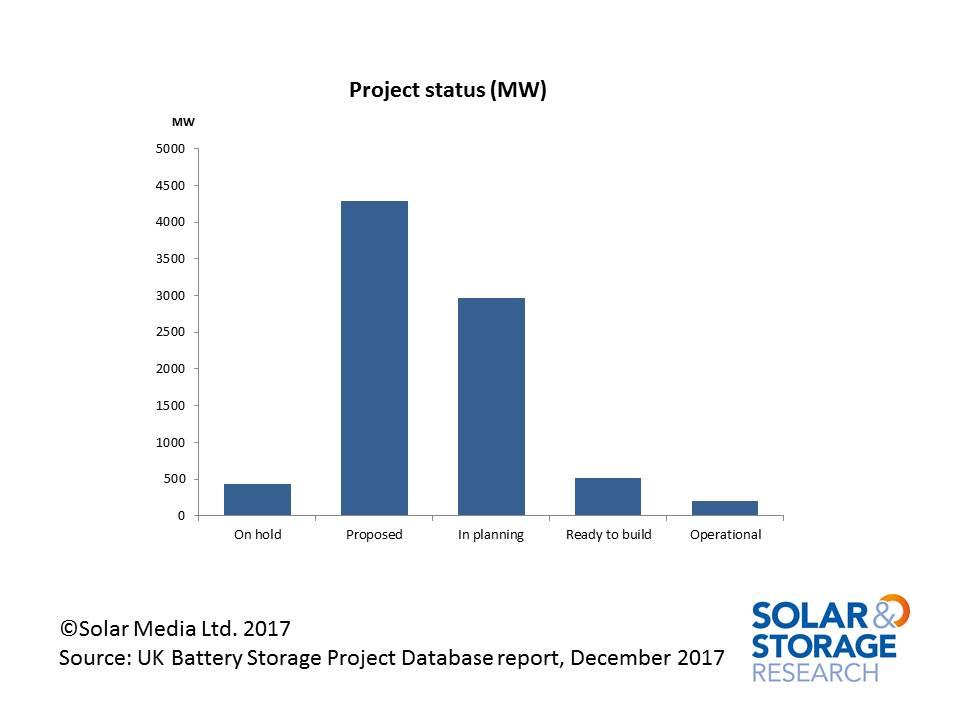 The “proposed” category is important at this stage as it shows there is a long-term pipeline developing, although the “on hold” projects show that there is already a significant amount of drop off happening in the pipeline with some speculative projects being mothballed at the early stages before the main investment is made.

The installed capacity of battery storage projects has shot up from the 100MW reported in November with the completion of several large projects and now sits at around 200MW. This will increase in the first quarter of 2018 as the remaining projects with EFR contracts approach the deadline for completion at the end of February.

However, looking further into the year it becomes less clear and the results of the Capacity Market auction, especially the T-1, begin to have much more of an impact. There are around 2GW of battery storage projects prequalified for the T-1, which shows a level of confidence that these projects could be developed within a year and therefore are already at an advance stage of development, or are just waiting for the green light to go ahead.

In 2017 we have seen the interest in battery storage in the UK evolve into actual projects and opportunities. In 2018 as the pipeline grows and the regulations become clearer we will see even more projects being completed and successful business models being revealed.