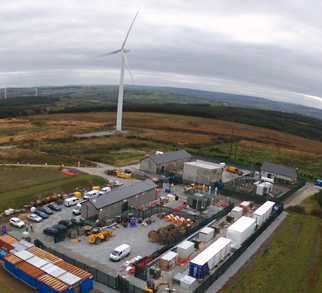 When the frequency of Ireland’s electricity grid dropped below normal operating range in May, two large-scale battery storage projects stepped in to help within 180 milliseconds, injecting power to help support and stabilise the network.

The Kilathmoy 11MW system — the Republic of Ireland’s first-ever grid-scale battery energy storage system (BESS) project — and the 26MW Kelwin-2 system, both built by Norwegian power company Statkraft, responded to the longest under-frequency event seen in the country in years as the grid went out of bounds of 49.9Hz – 50.1Hz for more than 14 minutes.

Statkraft Ireland’s head of grid services, Bernice Doyle, wrote a blog about the event and the wider picture for battery storage to help support the electricity network on the island of Ireland (the Republic of Ireland and Northern Ireland share a single grid).

Featured on our sister site Current± last week, Doyle looks at how the energy transition away from fossil fuels towards renewable energy brings with it the need to find new ways of bringing stability to the grid. Battery storage can be a vital source of support to the grid, enabling the addition of more and more wind and solar to it over time.

Often, Doyle wrote, the energy system today is using gas or coal power plants for energy purposes, but instead for support services to the grid. In doing so, wind power plants are shut off from providing electricity to the grid to make way for those thermal resources. Enabling emissions-free resources like batteries to provide those services instead, as they can, would therefore facilitate the use of renewable energy in several different ways.

You can read Bernice Doyle’s blog on Current± here.

Last week, Energy-Storage.news published an extract of an interview with four energy storage associations from around Europe, including Paddy Phelan, president of the Irish Energy Storage Association.

Phelan said that although energy storage is regarded as relatively new in Ireland, the country has met its 2020 goal of going 40% renewable electricity and energy storage project developers have been successful in winning contracts in the DS3, the grid operator EirGrid’s market for grid services.

Procuring 14 different network ancillary services under a fixed tariff regime, the DS3 had a strong start but the programme is due to expire in the coming three years. Despite this the need for fast-responding grid services assets like energy storage is likely only to grow and the industry in Ireland is hoping for a continuation of an evolved DS3-like grid services market beyond the 2024 expiration timeline it is set for.

Both Paddy Phelan in his interview and Bernice Doyle in her Current± Guest Blog also emphasised the anticipated need for longer duration energy storage assets on the Irish electricity system as higher shares of renewables grow.