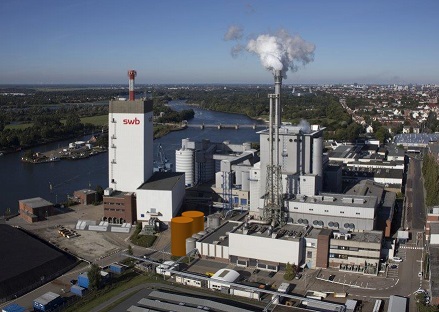 Swb Erzeugung AG & Co, which supplies electricity and heating as well as water, communications, internet and infrastructure services in Bremen and surrounding areas, has ordered a 20MW system, which can deliver 15MW of power for primary frequency control, a method of balancing the grid.

AEG Power Solutions has been working on developing a hybrid system which the company said could “significantly” reduce the cost of primary-frequency power. Essentially, batteries and an electrical heating system – which obviously stores energy as heat – are connected to a power converter. From here, the system can operate bi-directionally, injecting power into the grid as needed or drawing power from it to balance frequency.

As with other regions in Germany, the rising share of renewable energy on the grid is causing a greater need for grid-balancing and elsewhere in the country several standalone battery installations have gone online or are under construction, with Energy-Storage.News reporting on two such projects in January.

AEG claims the hybridisation of the two solutions can reduce costs by requiring a much smaller capacity of battery – the company claimed the saving on sizing could be around 50% – while storing energy in a heating system is considerably cheaper. Both storage systems share power electronics and grid connection point hardware, which AEG claims likewise reduces hardware installation costs. As well as reducing costs for the system operator, this cost reduction aspect could also reduce fees payable for maintaining the grid, which the German public pay for.

AEG Power Solutions CTO Jörg Liedloff said the company was “convinced that this approach is a very cost-effective and highly reliable one to support grid-stabilisation requirements”.

“We strongly believe that the market for such solutions ismaturing now and will offer us further opportunities.”

Meanwhile Jens-Uwe Freitag, managing director at the utility said the system was a perfect fit for Swb Erzeugung AG & Co as the company is already in the business of supplying both power and heat.