Batteries and hydrogen in Germany: Comparing crucial components for a modern energy system

What are the roles of battery storage and hydrogen in the clean energy system of the future? Matthias Simolka, a consultant at Germany-based TEAM CONSULT takes a look at the roles each plays today and where we might see the dynamics go from here, with regard to everything from large-scale renewables integration to electric transport. Co-authored by Madjid Kübler, managing director at TEAM CONSULT and Jens Jens Völler, head of business unit, gas, at TEAM CONSULT.

Renewable energy needs to be stored in order to make it available at all times and for mobile applications. In recent years, batteries and hydrogen technologies moved into the centre of attention as means of storage for renewable energies. For both technologies, stationary and mobile applications are available. But are these technologies competitors in the market and is one more advantageous than the other, resulting in the displacement of the less competitive technology? Or are they complementary and necessary for the overall energy system to maintain grid stability while integrating more and more renewable energies?

In the following, we analyse the current situation in Germany and provide an outlook for both technologies.

The German word “Energiewende” is often used, even in an international context, in conversations about the transition of the energy system from fossil to renewable energies, indicating Germany’s pioneering role in the global energy transition. The central features of the “Energiewende” are the decarbonisation of energy supply and the switch to renewable energies, which so far have been mainly taking place in the electricity system. The main challenge posed by renewable energies is their fluctuating generation of electricity, which impedes a stable and demand-actuated provision of energy. Over the years, the increasing share of renewable energies has led to higher load changes (feed-in gradients) in the power grid (see Figure 1 below).

The stock market follows both technologies carefully. Since mid-2019, two indices have been available with a special focus on e-mobility, one directed at batteries and one at hydrogen technologies. Since then, both indices developed positively, with the growth of the hydrogen index exceeding the battery index noticeably (see the following graph, Figure 2).

What is the current situation of the energy storage industry in Germany?

Analysis from TEAM CONSULT for Germany’s Energy Storage Association BVES shows that the revenue of suppliers of energy storages in Germany grew from just above €4 billion (US$4.79 billion) in 2015 to roughly €5.5 billion in 2019. The segment of batteries for home, industry and grid applications with revenues of more than €2 billion has a substantial share in the energy storage market in Germany. The manufacturers of hydrogen technologies reached a total revenue of about €120 million in 2019, which currently puts them far behind the battery sector. However, their revenue is expected to increase substantially within the next few years due to the intended growth of hydrogen production in Germany.

The operation principle of batteries is comparable to that of hydrogen-based technologies, i.e. fuel cells and electrolysers. Both battery and hydrogen technologies transform chemically stored energy into electrical energy and vice versa. Regarding hydrogen we focus on power-to-gas facilities (eletrolysers), which are used to produce green hydrogen, and on the fuel cell, which produces electrical energy from hydrogen.

The applications for which the different technologies are suited are determined by their properties. The battery technology offers fast responsiveness and high charge/discharge capacities of up to 100MW and more. Therefore, batteries are capable of providing and absorbing large power gradients. The storage of large amounts of energy over a long time period is not among the strong suits of batteries. This is why large scale batteries generated their revenues mainly used in the primary control energy market – also known as frequency containment reserve (FCR) – which needs to be activated within 30 seconds and operate for up to 15 minutes and represents the short-term response to imbalances in the grid – not by providing secondary or tertiary control energy. These control energy products take up to 5 min and 15 min to provide their full power and run for 15 mins or up to one hour and represent the slow, long-term response to imbalances in the grid.

Falling prices in the primary control energy market have been leading to an economically difficult environment for large-scale batteries and other providers of control energy. Next to the provision of primary control energy, a variety of other applications exist for stationary batteries. These include peak shaving by the consumer resulting in lower required capacities of the grid connection. Batteries are further utilised to shift a consumer’s withdrawals from the power grid to the grid’s off-peak times, generating an ‘atypical grid utilisation’ which is remunerated in Germany in the form of discounts on grid charges. Additionally, batteries are used as a buffer to increase the power of charging stations for electric vehicles, which drastically speeds up the charging process without costs for the local extension of the power grid. Profitable operation of large scale batteries is usually achieved by the combination of different applications (the so-called ‘multi-use application’), which is feasible due to the variety of available applications.

Due to technology improvements and economies of scale in production resulting in falling prices of battery cells, the capital expenditure for large-scale batteries was nearly cut in half from €1.35 million per MW of installed power in 2014 to roughly €0.7 Million /MW in 2018 and 2019.

Currently large-scale batteries with a total installed power of 551MW are operated in Germany for the public supply of the power grid. The largest battery in Germany is operated by LEAG in Brandenburg and offers a capacity of 53MWh with an installed power of 66MW. It is used for FCR and the integration of renewable energies. The largest expansion in the German large-scale battery market took place in 2018 with a total 181MW of newly installed power. In 2020, the expansion will decline town to around 81MW, based on preliminary data.

In Germany, theapplication of stationary hydrogen technology at currently operational and announced projects is mainly focused on the generation of hydrogen as a fuel, as feedstock and for the injection into the existing gas grid. The usage of the heat losses for other industrial processes and residential heating and the generation of electricity using hydrogen are further recurring applications of these projects. These stationary projects transform the energy into a different form, in which it can be stored for long-term in the currently available infrastructure. In the future, these technologies can be used to generate hydrogen, which afterwards is used to decarbonise industrial processes and the mobility sector. The fuel cell, which generates electricity and heat from hydrogen, is mostly used in stationary applications for decentralised cogeneration in heat and power supply, e.g. in the industry, and increasingly displaces diesel generators in backup power supply systems.

At the end of 2019, roughly 30MW of installed power of stationary hydrogen technology facilities were in operation in Germany. A steep increase of the installed power is expected to occur throughout the next years, with up to 5GW in 2030 according to the national hydrogen strategy published by the German government in June 2020.

The capital expenditure ranges between €0.8 to €2 Million per MW of electrolyser capacity for current projects in Germany, with the costs depending on the electrolyser technology; due to the low number of deployed units, the range is still rather wide. The capital expenditure is expected to decrease over the next years as installed capacity increases. 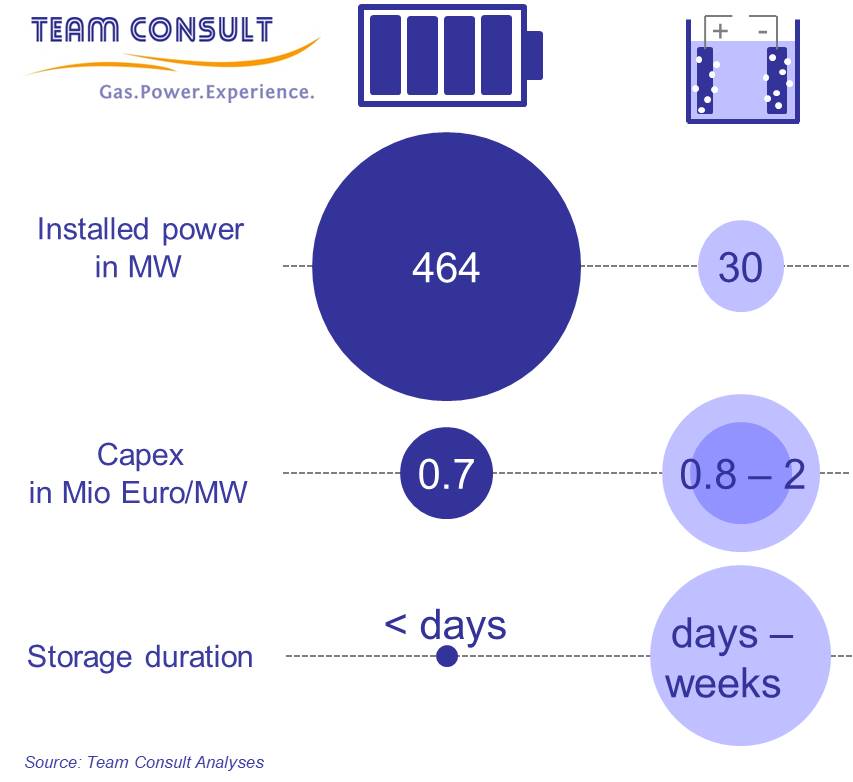 In the mobility sector, the battery is by far more widespread than the fuel cell. In total more than 83,000 battery-powered electric vehicles (EV) were registered in Germany at the beginning of 2019. The fleet has more than quadrupled since 2015. Regarding battery-powered trucks, more than 17,000 vehicles were registered. Nearly all registered electric trucks offer a cargo load of less than two tonnes, and thus fall into the category of small trucks.

This compares to 507 registered fuel-cell electric vehicles (FCEV) in Germany up to 2019. Fuel-cell trucks are currently not ready for mass production, although the fuel-cell technology itself is considered to be mass production-ready. Fuel-cell trucks and buses are expected to enter the market within the next years. In this market segment, the fuel-cell is considered to possess significant potential, based inter alia on the expectation of Total Cost of Ownership (TCO) cost parity between diesel and fuel-cell trucks by 2030 (Source: Roland Berger (2020) – Potenziale der Wasserstoff- und Brennstoffzellen-Industrie in Baden-Württemberg). Some sources assume 45,000 fuel-cell trucks in total to be in operation in Europe by 2030 (Source: Deloitte & Ballard (2020) – Fueling the Future of Mobility).

What is the state of e-mobility infrastructure?

However, the number of charging stations necessary for a given fleet of EVs is higher compared to the number of hydrogen fueling stations needed for the same fleet of FCEVs. This is based among others on the longer duration of the charging process of EVs compared to FCEVs. Nevertheless, the charging infrastructure for EVs exceeds the FCEV fueling infrastructure, but the difference is smaller than the absolute numbers suggest. In comparison to the e-mobility infrastructure, there are over 14,000 gasoline or diesel fueling stations for the current fleet of internal combustion engine vehicles while 360 of these stations are located on highways, which are especially important for heavy-duty transport.

Conclusion: Complementary technologies rather than competitors

To conclude, each technology has its specific advantages, and it has to be decided on a case-by-case basis which technology to use, based on the requirements of the respective application as well as the individual properties of these technologies.

In the mobility sector, battery storage currently still has cost advantages and is much more common. The efficiency of the hydrogen technology is significantly lower than the efficiency of batteries. Due to the long ranges required in heavy duty transport, the fuel cell will probably have advantages over the battery in this segment in the long term.

In stationary use, battery storage systems are already a well proven technology that can compete in the market at low costs. The hydrogen technology will need some more years to achieve economic efficiency. In the long term, however, the hydrogen technology has a high potential for energy storage and to provide energy in a number of different sectors, while making use of existing infrastructure.

Batteries and hydrogen technology are thus complementary technologies rather than competitors – they will all be required on the way towards a decarbonised and efficient energy system.

Batteries are used permanently in various fields of application and continue to conquer new applications. However, the limits of the battery technology are evident in real-life applications, including the long charging duration in battery-powered vehicles and the limited storage capacity in stationary applications. These factors may explain the underperformance of the e-mobility battery index in the capital market compared to the e-mobility hydrogen index. Looking into the future, hydrogen technologies are believed to have greater potential for unlocking energy-intensive fields of application for which there is currently no solution for decarbonisation. This outlook is reflected in the better performance of the hydrogen index. The future will show to what extent hydrogen technologies can fulfil these expectations.