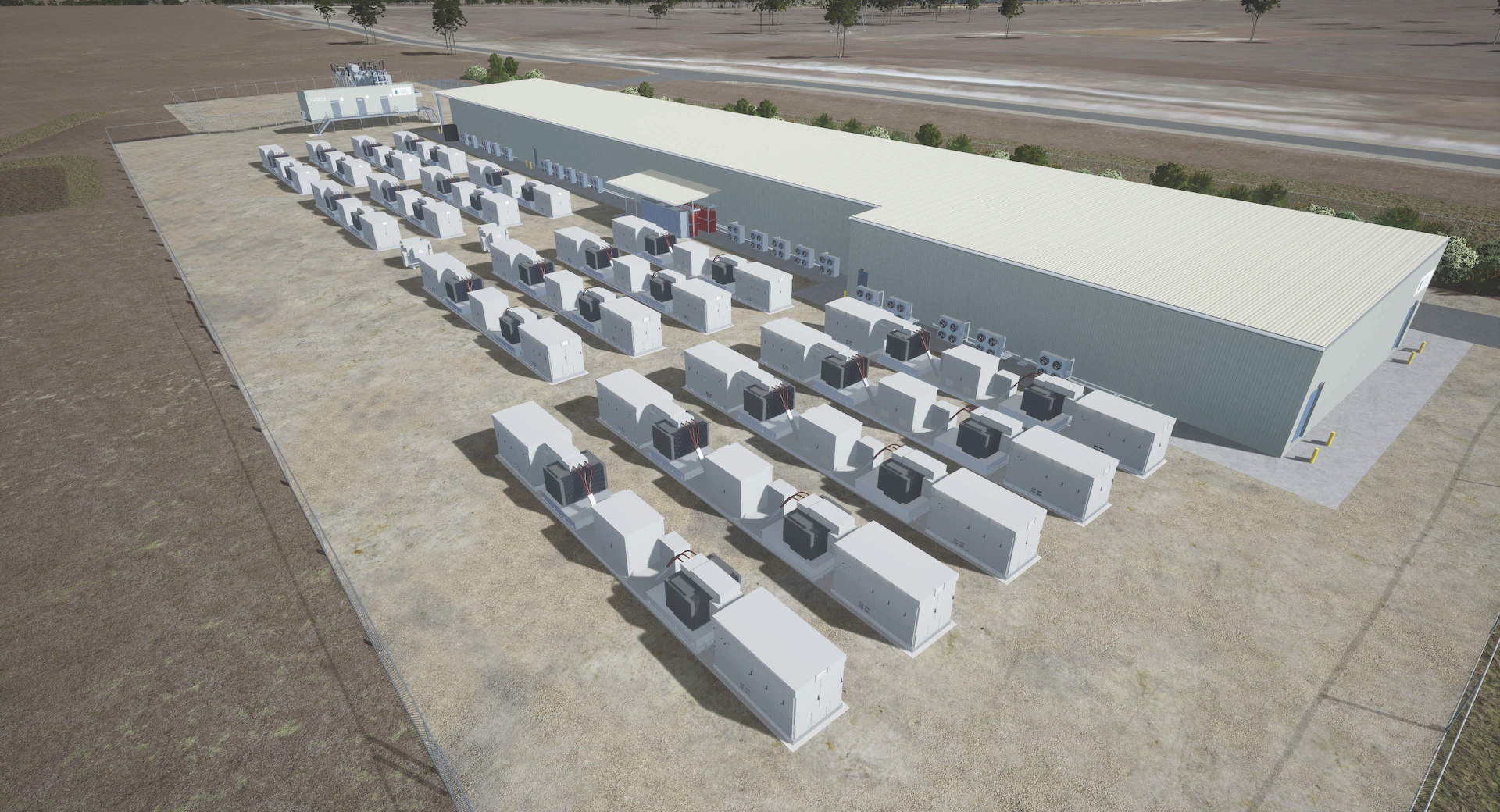 Technology providers Fluence and Wartsila have been chosen through a competitive solicitation process to supply up to 1,000MW of grid-scale battery energy storage to Australian energy generation and retail company AGL.

AGL said in a press release today that the two companies have been “secured under non-exclusive framework agreements” to supply the battery storage systems. AGL, with around 4.2 million customers across its gas and electricity retail businesses, has a target already in place of deploying 850MW of grid-scale energy storage by the 2024 financial year, by which time it plans to be depending on renewable energy and energy storage for 34% of its electrical capacity.

“Our grid-scale battery plans provide critical firming capacity to the market and will play a leading role in the energy industry’s transition over the coming decades.”

That 850MW of new storage capacity will be within the service area of Australia’s National Electricity Market and during 2020 the utility company dropped several announcements of specific project plans which will make up that portfolio. These include a 250MW / 1,000MWh project at Torrens Island, South Australia, two in New South Wales of 150MW and 50MW and another in Victoria of 200MW.

Incidentally the Torrens Island project was thought to be the largest proposed project in Australia when plans were announced in November, but just this week AGL’s rival Origin Energy said it intends to build a 700MW / 2,800MWh project in three phases at the site of a coal power plant destined for retirement, with the first phase to be completed by the end of 2022, pending the project’s approval and other planning hurdles being overcome.

Recent research from consultancy Cornwall Insight Australia found that nationally, there is a pipeline of about 7GW of battery storage projects either proposed or under development across Australia. 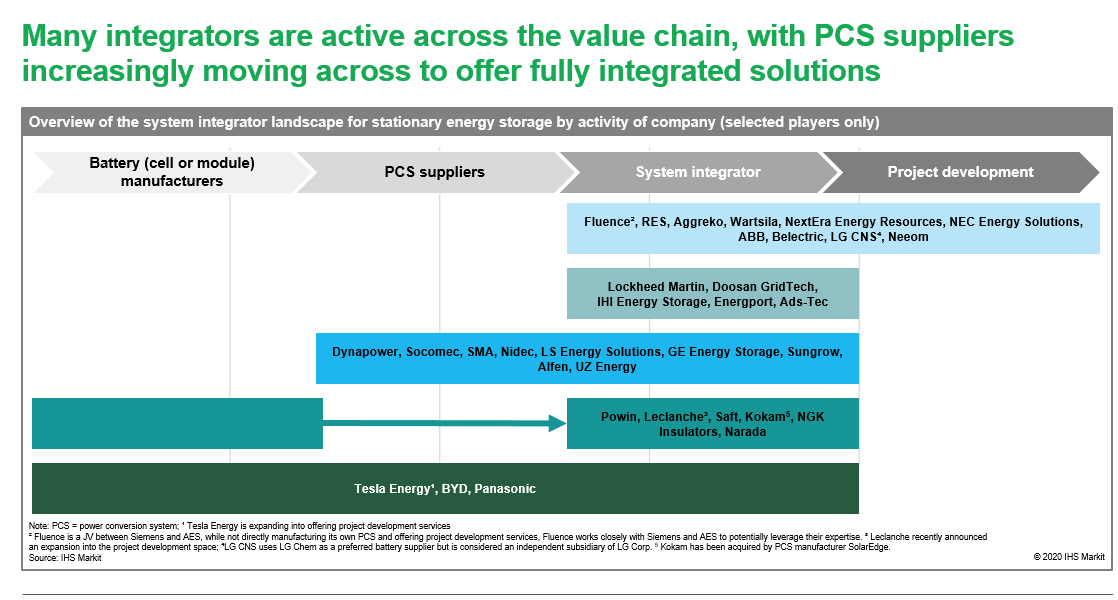 IHS Markit’s overview of the system integrator landscape, in which both companies emerge near the top. Image: IHS Markit.

AGL’s chief operating officer Markus Brokhof said that the two energy storage technology providers were chosen against others for their capabilities and experience in the sector as well as pricing. Brokhof also said that the pair are in alignment with the values and strategic objectives of AGL. The utility is targeting net zero emissions by 2050 and Brokhof claimed AGL is Australia’s biggest private investor in renewable energy already.

“Wärtsilä and Fluence are both global leaders in energy storage technologies, ensuring we are investing in the highest standards for performance, reliability and safety,” Brokhof said.

“We are already well advanced with our planning process and these framework agreements will reduce tender timeframes for individual projects, enabling faster project schedules and commercial operation.”

Wärtsilä Energy sales director Suraj Narayan said that the grid-scale batteries will be used to help provide “critical firming capacity” to Australia’s energy market. Narayan added that the battery storage “will play a leading role in the energy transition from coal to renewables”.

“Australia’s grid is evolving quickly, and batteries can fill critical gaps left by coal and gas retirements, both the super-fast services needed to strengthen the grid and as a source of peak power,” Fluence’s VP of global markets Jan Teichmann said.

“As a pioneer of the technology, Fluence’s team has seen the demand for energy storage grow to where we are now regularly contracting and deploying both 100+ MW storage solutions and portfolios of storage assets on grids around the world.”

In a recent article for our quarterly technical journal PV Tech Power, Julian Jansen, associate director in the Gas, Power and Energy Futures Consulting team at research and analysis company IHS Markit identified both Fluence and Wärtsilä as among a small handful of leading players in the energy storage system integration space. Both are particularly strong in the US market, which is currently the world’s most advanced market for large-scale battery storage, Jansen said.

Fluence is a dedicated energy storage technology provider operated as a joint venture between AES Corporation and Siemens and was recently valued at over a billion dollars after netting a US$125 million investment for around 12% of the company from the Qatar Investment Authority sovereign wealth fund.

Fluence has already worked on a couple of grid-scale projects in Australia and the company said in its own press release today that it will deliver its latest generation of GridStack battery storage systems to projects in Australia. Along with other applications to keep the grid stable and integrate renewable energy, the GridStacks will deliver synthetic inertia into the National Electricity Market – playing a crucial role in stabilising the grid traditionally delivered by large fossil fuels plants.

Wärtsilä’s energy storage system integrator and solutions business is meanwhile a division of the Finland-headquartered integrated power and energy company which is perhaps better known for gas turbine engines globally but has become a key player in the battery storage market since its 2017 acquisition of early US energy storage market leader Greensmith Energy. The company recently installed Singapore's first-ever grid-scale battery storage system.