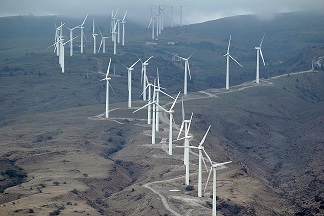 Younicos will carry out another project to retrofit lithium-ion batteries in replacement for an existing lead acid battery system at a wind farm, this time in Hawaii.

In December 2017, Energy-Storage.News reported that battery energy storage at the 36MW Notrees wind farm in Texas was successfully upgraded by the German-American system integrator to take out existing lead acid batteries and replace them with lithium. Company spokesman Philip Hiersemenzel said that the operation had been carried out with “minimal downtime” from the system.

Younicos is now following that up with the award of a contract to do the same for Kaheawa, a wind farm built in two phases totalling 51MW generation capacity, on the island of Mau, Hawaii, from developer and asset owner TerraForm Power. The energy storage facility will be of 10MW capacity, expected to have a short duration of storage and will be used to smooth out the variable output of the wind farm. The project is expected to be completed during the second half of this year and will be fitted with Younicos’ proprietary Y.Q. control software.

The lithium-ion retrofit will increase the usable energy capacity potential of the wind farm, increase operational lifetime of the energy storage system and the use of the Y.Q platform will enable the storage facility to run on a fully automated basis, including assessment and monitoring of the life of the battery.

“It’s a win-win for both TerraForm and the environment.”