Wood Mackenzie: Energy storage has ‘found a foothold nationwide’ in the US 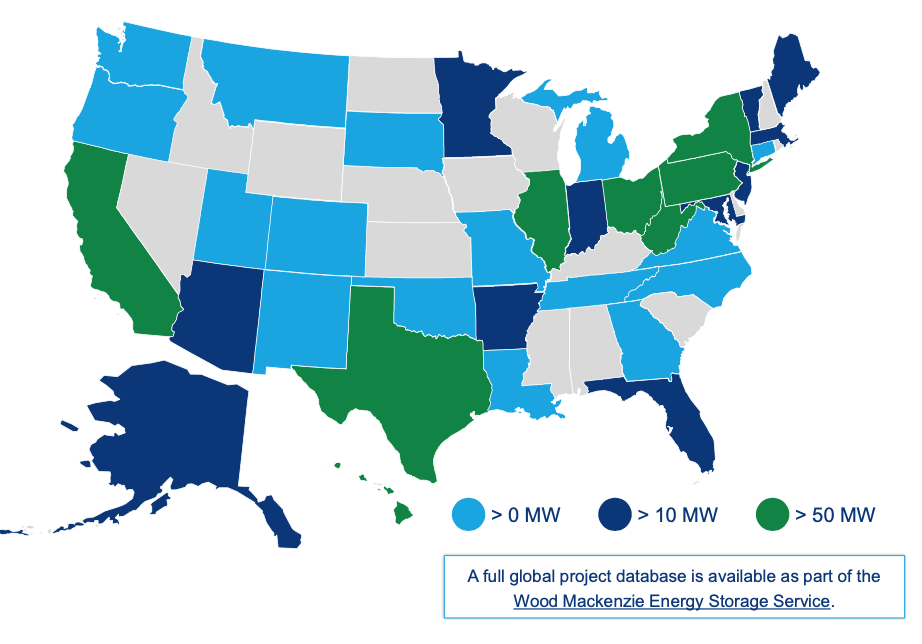 A more than 14-fold increase is forecast, from 523MW recorded in 2019, with the “sharp scale-ups” both regionally and nationally to be driven primarily by a combination of “utility procurements and the accelerating residential market,” the report claims.

Over the next two years alone, the first really big utility procurements of energy storage are set to come online, causing an expected trebling of the market volume this year and then more than doubling again in 2021.

While supply constraints noted in the front-of-meter (utility grid-connected) market are pushing some projects back from the beginning of this year to 2021 or later, even during the period that these delays were beginning to be experienced, “the scale of planned large-scale system planning has surged,” according to Wood Mackenzie analysts.

“The U.S. energy storage market has shown rapid growth over the past decade, moving from pilot to commercial scale, but perhaps most remarkable is the geographic breadth and diversity of its success,” the report said, adding that energy storage is proving a range of services nationwide that shows it has “found a foothold”.

These services include grid-level storage delivering ancillary services in territories including the New England ISO system operator service area, PJM Interconnection, Texas' ERCOT, CAISO in California and others. Meanwhile, storage paired with solar is on the increase, as is the deployment of energy storage in lieu of more expensive transmission and distribution network upgrades.

Utility planning, as well as the expected opening up of regulated wholesale markets to energy storage participation, will “open up new areas for growth,” the report said, while the residential market boom can largely be put down at the moment to resiliency concerns in areas like California, where public power shutoffs have threatened households’ security of grid electricity supply while at the same time, policies are being created that favour individual citizen investment in home storage equipment.

In terms of dollar value, that 7.2GW annual market roughly equates to US$7.2 billion, with those utility procurements alone accounting for a jump to more than US$4.2 billion by 2021, from just under two billion (US$1.962 billion) in 2020.

Yet another record-breaking quarter was enjoyed in the final period of 2019, with 186MW deployed, which represents a 33% year-over-year growth. in megawatt-hour terms, this was around 364MWh, which implies that a mix of longer and shorter duration grid storage is being valued in the US. This included 1-hour duration batteries being installed in the PJM Interconnection service area.

Wood Mackenzie said that 103.8MW was front-of-meter, non-residential behind-the-meter (customer-sited) storage added up to 42.2MW while residential storage had another record quarter with 40.4MW installed in Q4 2019, doubling figures from Q4 2018.

Obviously challenges remain. On the policy front, the Energy Storage Monitor referred to the ongoing disputes between regulator FERC and buyer-side mitigation rules in the New York NYISO system operator’s markets as well as minimum price rules in the PJM Interconnection area which spans several states, that could “potentially throw a wrench into renewable and energy storage participation in wholesale markets”, the analysts said.