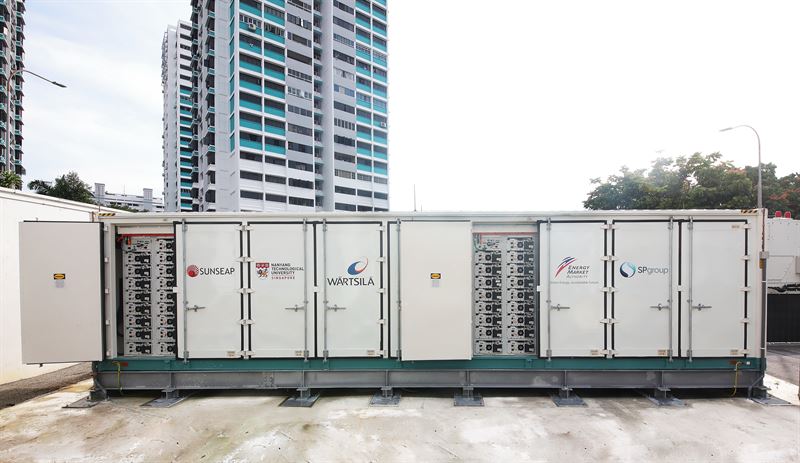 Wärtsilä has installed the first utility-scale battery storage project in Singapore and received an order from a customer in Southeast Asia for a further 90MW / 90MWh of battery storage.

The EMA is Singapore’s Ministry of Trade and Industry’s statutory body for ensuring reliable and secure energy supply in the Southeast Asian island city-state. It has already identified energy storage as a “game-changing technology” earlier this decade, committing funding for energy storage development as far back as 2014 and later launched the Accelerating Energy Storage for Singapore (ACCESS) programme, announcing the lithium-ion ESS trial project in 2017 and awarding it to locally-headquartered engineering firm CW Group.

The EMA, identified solar energy as the “most viable renewable energy source” for Singapore and highlighted the role of ESSs in integrating that resource, said in a press release that the project has been installed at a substation. An important component of the trial, or “test-bed” project is that the system will “provide insights into ESS’ performance under Singapore’s hot and humid environment,” helping to create technical guidelines for such deployments, which the Authority said are “currently not available”.

“We have been working with partners to facilitate the deployment of different ESS solutions. This is critical in supporting Singapore’s target of at least 2 gigawatt-peak of solar deployment by 2030”.

In addition to that solar PV target – or rather in combination with it – Singapore is targeting 200MW of energy storage deployment “beyond 2025”. Alongside the lithium-ion battery project announcement in 2017, EMA said it is also trying out other technologies including flow batteries.

Wärtsilä also said earlier this month that it has received an order for a 90MW / 90MWh ESS solution, including an EPC contract, from an existing Southeast Asian customer, which it did not name in a press release sent out on 19 October. The company did say that the system will provide flexibility and grid support to the region in which it will be deployed, while also aiding the integration of renewable energy sources to the local network.

According to Wärtsilä, which recently launched the newest iteration of its Gridsolv battery system product, Gridsolv Quantum, out of 9000MW of installed capacity of projects the company has done in Southeast Asia, around 300MW has been energy storage to date. In January 2020, Energy-Storage.news reported that the company had received an order for a 100MW / 100MWh standalone energy storage system from a Southeast Asia customer, with location of the project and name of the customer again undisclosed. Appetite for energy storage to not only integrate renewables but also to add resiliency and reliability to electricity networks in Southeast Asia appears to be on the rise, with rival technology provider Fluence announcing 500MW+ of orders from a customer in a Southeast Asian territory – again unnamed – that Fluence COO John Zahurancik said would “rapidly come to life across an entire country’s electricity network”.

The company is traditionally better known for its work in developing and selling gas engines and turbines, but claims to have developed a vision for targeting a 100% renewable energy future including battery energy storage in the short and medium-term and an expected emphasis on power-to-gas technologies in future including green hydrogen.