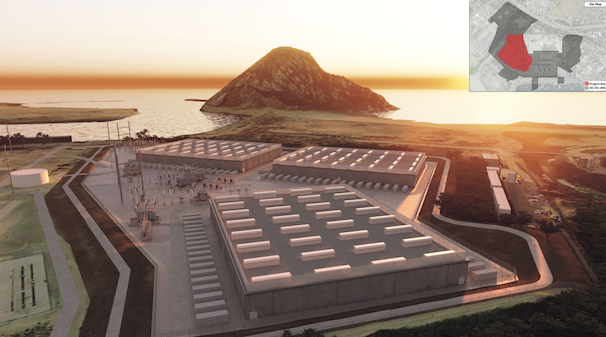 Retail power company Vistra Energy has followed up its recent completion in California of the world’s biggest battery storage facility by proposing a new facility in the state with twice the rated output.

The company inaugurated the 300MW / 1,200MWh Moss Landing Energy Storage Facility just before the end of 2020 in California’s Monterrey Bay and announced its commissioning early this year. A few weeks ago at the end of January, Vistra Energy representatives appeared at a meeting of the city council of Morro Bay, about 150km south of Moss Landing to discuss the company’s plan for a 600MW standalone battery energy storage facility.

Vistra’s director of community affairs Brad Watson and senior director for corporate development and strategy Eric Cherniss were introduced by Morro Bay Mayor John Headding at the online meeting. Watson said the company was “excited at the potential” of joining the city in a “combined effort” that would create many benefits for the local area and the wider region.

The Morro Bay Energy Storage Facility would be used to absorb excess renewable generation, mainly solar, and put it on to the grid at times when it was most needed. The project would “revitalise” an existing natural gas power plant site, occupying 22 acres of the 107 acre complex with roughly 180,000 lithium-ion batteries housed in three purpose-built, 30ft “low profile” buildings.

Other advantages of the site’s selection, according to the Vistra representatives, are that it would tie into local utility Pacific Gas & Electric’s (PG&E’s) active transmission lines with three new project-level substations connecting to PG&E’s existing substation built to take electricity away from the gas power plant which was there already.

The project’s development is being timed to coincide with the forthcoming retirement of California’s Diablo Canyon nuclear power plant, which is scheduled to happen during 2024. If the Morro Bay project can begin construction next year, Cherniss said, it could be online around the time that retirement happens. The project could help the state meet its urgent needs for Resource Adequacy while contributing to Vistra's emissions redution goals.

Battery storage can change and be disruptive to the grid because it can capture excess solar generation for later use: the way the grid is set up today requires a perfect match between generation and demand. While there is a demand for power, Watson said, Vistra does not feel it needs to build any more California natural gas plants, which could cost the company upwards of US$600 million and while cleaner than coal, are still fossil fuel-burners.

The pair said that the facility and its development would adhere to codes and standards on safety, as well as industry best practices, while Vistra is committed to coordinating with the Morro Bay Fire Department and city staff on project design and other aspects. Vistra looked forward to “working collaboratively with the local community to make this project a success,” Eric Cherniss said.

The project is a new part of Vistra’s plans ahead, with the power retailer recently unveiling a plan called ‘Vistra Zero’ which promises to accelerate its fossil fuel retirements including 7,500MW of coal by 2027 and deploy around 9GW of renewables around the US by 2030, as well as large-scale battery storage facilities. It wants to go full net zero by 2050.

The Moss Landing site, as well as Morro Bay at the site of two other large-scale Vistra battery projects, one in Oakland, California and the other in Hood County, Texas, offer the company the chance to repurpose land occupied by fossil fuel plants and their associated infrastructure. In the case of Moss Landing, while not all of the gas turbines have been shut down, some have and halls which once housed those gas turbines now contain battery systems.

Vistra's Powerpoint presentation for Morro Bay City Council can be seen on the council's website here.