Home batteries in a South Australia delivered significant revenues from their first six months of participation in a virtual power plant to help balance the grid, even with only an initial 1MW – 2MW of aggregated customer systems participating.

The Australian Energy Market Operator (AEMO), which covers large portions of the south eastern and western parts of the country, released an initial report on its VPP Demonstration Programme, based on data collected from July 2019 onwards.

Virtual Power Plants basically use interconnected and aggregated behind-the-meter resources, including, but not limited to, battery energy storage systems, to deliver the types of services that would traditionally be performed by centralised thermal power plants.

With the first rollout of the VPP trial beginning in the state of South Australia, the services provided by an initial 1MW of systems expanded to 2MW in November 2019. The applications served mainly covered frequency regulation and also dealing with imbalances caused in the energy market that include negative pricing, which can occur when the system has an oversupply of resources such as production of wind energy that exceeds the demand at the time of generation.

While VPPs have been in use for many years that perform demand response applications, the enabling of home batteries which can act bi-directionally and feed in energy to the grid as well as take energy out, is the key to this new configuration from a network point of view.

Tesla Powerwall systems were offered to customers via retail partner Energy Locals, with consumers receiving discounts on their purchases in return for some of the batteries’ capacity being made available for those network-balancing services. According to Energy Locals’ website, this means that with government rebates being offered, customers can save as much as 35% from the list price. The VPP operators are also responsible in the ongoing programme for deciding how revenues generated are shared with customers. 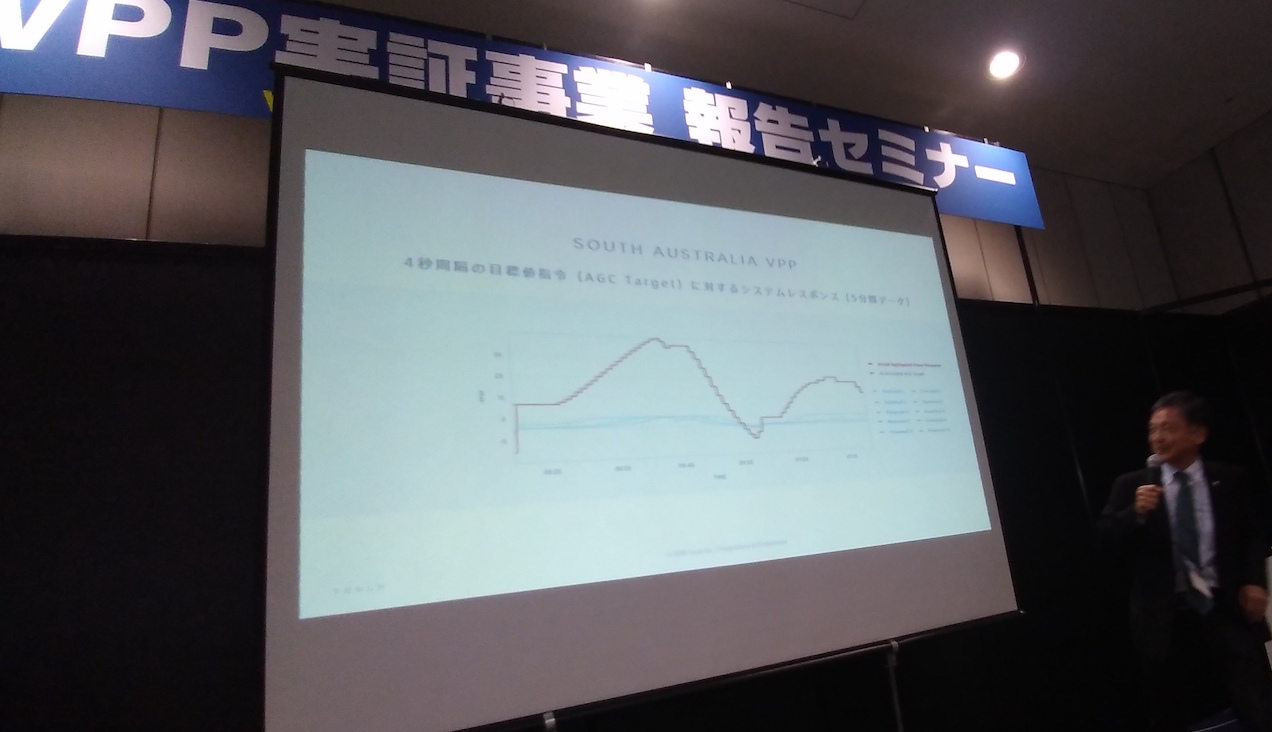 Once the programme kicked off in July and installations began, the first four months of participation in six frequency control ancillary services (FCAS) markets as well as two energy pricing events from 13 September 2019 to 12 January 2020 analysed by AEMO in its report show five major incidents occurred that required the VPPs to intervene.

Two large contingency frequency events, defined as lasting for one to two hours, both occurring in November, earned AU$110,041. One happened on 9 November 2019 as there was heightened risk of the state becoming islanded, triggering a shortage of electricity supply in AEMO’s lower 6-second and lower 60-second markets, which meant the wholesale market hit a price cap (AU$14,700/MWh) in the wholesale market for 85 minutes.

The second November 2019 event, a week later, occurred when an interconnector tripped, resulting in South Australia actually becoming islanded for around five hours. The resulting scarcity of supply in three FCAS markets drove wholesale prices up to meet that cap for two periods of 100 minutes and 65 minutes.

Then, on 10 December, a series of shorter events happened within 45 minutes of each other which required the batteries to charge in order to lower the system’s frequency from over 50.15Hz to its optimal 50Hz. Then, the batteries were required to discharge to bring the system frequency back up as it dipped to below 49.85Hz. Those five events within the space of a day earned AU$132,047 in FCAS market revenues.

The other big test for the systems came as energy pricing elevations were expected in the week 9 January 2020 to 15 January 2020. The AEMO report said that what happened then “provides evidence that VPPs do respond to energy market signals”. As seen below, batteries pre-charged as elevated prices were anticipated and then discharged when prices spiked high.

In fact, when transmission towers in South Australia were flattened by a freak storm at the end of January, the virtual power plant then earned AU$1,032,775 in less than a fortnight. 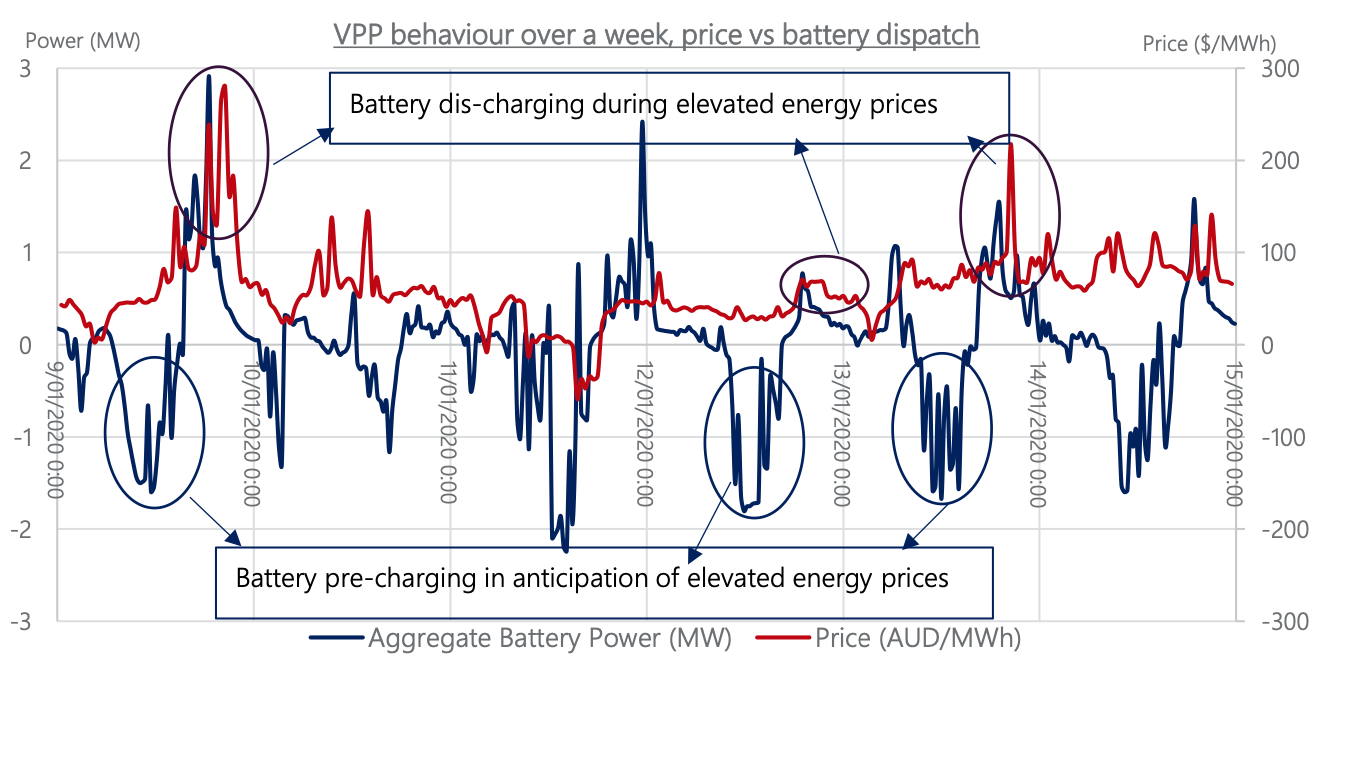 Energy response for the South Australia Virtual Power Plant from 9-15 January 2020, showing its behaviour over a week. Image: AEMO / Tesla.

Despite growing recognition of their abilities to deliver both financial value and enable resiliency in networks, while also allowing for the retirement of fossil fuel generators, it appears two main barriers hold back VPPs from mass scale-up. The first is the difficulty of acquiring enough customers to take part – which South Australia seems to have covered through a public-private partnership that includes systems provided directly to residents of public housing – while the second is the regulatory space.

Most grid-connected parts of the world still do not enable the bi-directional flow of electricity, while markets are often not configured to allow aggregated small-scale systems including batteries, solar and other distributed energy resources (DER) to deliver the same services that centralised generators have traditionally delivered.

AEMO acknowledged in its report that the industry is still in its infancy, with work to clarify the best ways to remove these barriers ongoing, along with the need to establish cyber security and other data-related protocols. There was a snag during one frequency event where the availability of batteries was below what was required, which Tesla said could be rectified in future by more frequent reporting of availability to the market operator. The next immediate step for market operator AEMO is a survey for customers participating, which is now ongoing. Tesla meanwhile, is using the stats collected to help market its push for expanding the VPP into other territories, including Japan.

Meanwhile, the VPP trial opened up to a small handful of other providers – Tesla rival sonnen is marketing its 10kWh sonnen homebatterie into the trial. Network technology company Power Ledger, partnered with sonnen, has put a simple calculator on its website to demonstrate what savings customers can expect in South Australia from using the home energy system along with solar panels.

From playing around with the configurations on the site, from an average household’s 18kWh annual electricity demand coupled with a 6kW solar array, even without taking advantage of SA’s subsidy programme (which most customers are likely to be eligible for until 15 April), the annual benefit of the VPP participation pens out at just under AU$3,000 a year, giving the whole system a payback period of around 6.8 years.