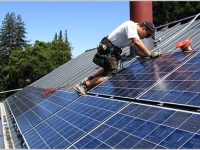 A commercial rooftop solar installation elsewhere in the US. The Origis project will pair a rooftop PV system with a battery installed at ground level nearby. Image: Borrego Solar.

The addition of energy storage has made a 1MW community rooftop solar project in Massachusetts viable after a long-term PPA was secured with a local utility.

Expected to be the Commonwealth state’s first completed solar-plus-storage project, capable of delivering 1.7MWh of so-called ‘baseload’ electricity each year, the community project had originally been proposed as a solar-only installation. This, however, was pushed back and didn’t happen due to the already-high penetration of solar on the local grid, which raised concerns.

Matt Stelmach, the chairman of SMLD’s board, which serves close to 4,000 residential and commercial customers and operates 160 miles of distribution lines, said that the addition of battery energy storage to make the plant’s output dispatchable had allayed some concerns about overcapacity of solar being fed into the grid at times of high production.

“We are approaching the Light Department’s self-imposed cap on commercial solar capacity, but [the] introduction of a grid-scale battery system greatly reduces any concerns along those lines. This project is a very good match for Sterling and will greatly benefit its ratepayers,” Matt Stelmach said.

Stelmach’s SMLD colleague Sean Hamilton, a manager at the utility, said the local community offers “tremendous support” for clean energy initiatives, adding that the community aspect of the project allows the utility to open up the benefits of solar to households that might not be able to host their own rooftop system. Hamilton also said the project’s economics protect customer rates

Another key aspect of the project successfully getting underway was the effort put in by Vincent J. CampoBasso, who is a local attorney and who manages the site where the project will be installed, on land owned by a local construction company, Rockbreakers. According to Origis Energy, CampoBasso worked alongside SMLD and Origis to make it happen.

Construction begins later this month and is expected to take around two months, aiming for completion by the end of March. Details on equipment or components to be used have not been revealed, except that Origis will obtain batteries from a Tier 1 lithium-ion provider, as well as 4,000 PV panels, also from an unnamed Tier 1 provider.

While developer Origis Energy will also own the project, a subscription programme will be created for SMLD ratepayers, according to state policy guidelines from the Massachusetts Department of Energy Resources (DOER).

Massachusetts is one of only three US states thus far to implement a target for energy storage deployment, which while only considered ‘aspirational’ (i.e. non-binding) and dwarfed by California (1.3GW) and New York’s (1.5GW) targets at only 200MWh, nonetheless makes the state “one to watch” for the international industry.