US Vanadium, which counts high purity electrolyte for flow batteries among its range of vanadium products, has said it will expand its annual electrolyte production capacity to 2.25 million litres a year in response to demand.

The company operates a facility in Hot Springs, Arkansas, from where it produces the electrolyte’s main ingredient, vanadium pentoxide (V2O5), along with processing that into electrolyte for offtakers in the vanadium redox flow battery (VRFB) space.

US Vanadium said yesterday that it will be working in partnership with Austria-headquartered VRFB maker CellCube to develop the expanded production capacity at Hot Springs. The partnership comes off the back of a recent order US Vanadium received from CellCube for 580,000 litres of electrolyte to be used in a 8MWh VRFB system.

The long-duration battery system is going to be part of an industrial microgrid at a site near Chicago, Illinois. The microgrid will be a hybrid project that combines rooftop solar and the flow battery along with a flywheel, designed to maximise the amount of uninterruptible backup power the customer can use at its facility. Energy-Storage.news enquired from CellCube today if it will be the project that was recently announced by power electronics manufacturer G&W Electric, but has yet to receive confirmation.

US Vanadium said the electrolyte production facility expansion will cost around US$2.1 million. The company produces various vanadium products from recovery from industrial waste streams: the metal is found in steel slag, which is a by-product of steel production. In August, it licensed its vanadium electrolyte manufacturing technology to startup Australian Vanadium and will also provide vanadium oxides to its near-namesake for electrolyte production in Australia.

About 80% of the vanadium used worldwide in industries like steel, aerospace, speciality chemicals and latterly VRFBs comes from co-producers like US Vanadium and other players mostly in China and Russia. Meanwhile there are just three primary producers of vanadium, which mine the metal directly from the ground.

In the latest edition of our quarterly journal PV Tech Power, we look closely and the strategies of two of those companies, Bushveld Minerals and Largo Resources, both of which are seeking to promote and get involved with the VRFB industry at varying levels of vertical integration.

For example, Bushveld’s subsidiary Bushveld Energy recently began construction on its own VRFB electrolyte plant, capable of expansion up to 800MWh worth of electrolyte production capacity per year from an initial 200MWh phase. Electrolyte forms the most expensive part of the battery and both Bushveld and Largo have decided to help lower capital cost of batteries for their customers by renting it to them. They believe the electrolyte, which doesn’t degrade with use and is recyclable, can retain much of its value.

In the journal, we also speak exclusively about the history of the VRFB with one of its inventors, University of New South Wales professor Maria Skyllas-Kazacos, who said that many of the processes she and her colleagues developed decades ago for making electrolyte from vanadium pentoxide are still broadly used today.

Further downstream, US-British VRFB manufacturer Invinity Energy Systems said a few days ago that it is ramping up production at its facilities in Bathgate, Scotland, in response to growing demand. The company declined to reveal its annual production capacity figures but said they have more than doubled since the beginning of 2021.

Only around 1% or less of the world’s vanadium demand currently comes from flow batteries, but the above and many other players are hoping this will change as the need for renewable energy storage with several hours duration increases.

So far, the world’s biggest existing vanadium flow battery site is a 60MWh project by Sumitomo Electric in Hokkaido, Japan, but there are at least two projects currently in construction in China of 100MW / 500MWh or more — US Vanadium noted that its deal with CellCube is one of the biggest such transactions outside of China, which currently looks to be the global market-maker on VRFBs. 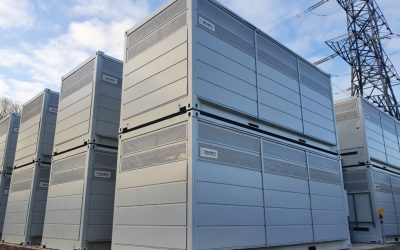